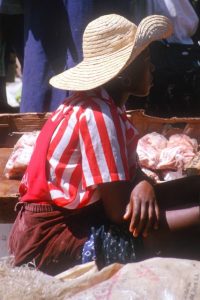 A short and most personal assessment of Haitian politics at the time, triggered by the inauguration of president Aristide.

Haitian politics would be an altogether separate subject for these diaries, and what better occasion to write about it than the installation of the president, Jean Bertrand Aristide. As a true VIP, I was invited to the whole spectacle on February 7th, from blessing in the cathedral to private reception in the palace, then the cultural show in the palace gardens and the ‘dejeuner’. Plenty of discussion beforehand, whether I actually should go or not, given the questionable democratic credentials of this president, or rather, of his political machinery, but in the end we decided that I should go to church (can you imagine?) and then play it by ear.

Getting downtown was easy, with no traffic on the way, the streets of Port-au-Prince being deserted, hardly any people, all shops closed; there was even no street market, a truly unique feature! However, closer to the cathedral things started to change, with groups of Aristide supporters sailing through the streets, waving flags, and all wearing new T-shirts commemorating the 7th of February. Cars and small vans packed with people, hanging out of the windows, more flags, singing, and a liberal accompaniment with car horns. Streets barricaded with concrete blocks, to stop too many cars from reaching the cathedral. Yet, we made it well in time, to the side entrance that was reserved for mere mortal VIPs, like me. VIPs in Haiti do not wait in line, they stampede, but with plenty of past experience I was inside in no time, past the army of American bodyguards that Aristide employs. Given Haiti’s violent history, and the fact that more presidents left office dead than alive, perhaps not a bad idea. Church was not yet full, and I found myself a place somewhere half way the isle, with a good view of the spectacle to come.

Inside there were even more body guards, all with conspicuous earplugs, talking continuously into the lapels of their slightly oversized suits, which were bulging at the left shoulder. I was sitting behind four shadier than shady gentlemen, all decorated with thick gold chains, who still had their sunglasses on: no body guards, I guess, but reputable guests from the business circles that the president gets his support from. At precisely 10.30 the other side entrance opened for about 30 seconds, letting in a small part of the masses that had gathered outside, the masses who came to see their hero, the ‘president of the poor’, being inaugurated. The masses, distinctly less well dressed than the rest of us (although the red and blue head bands do have something special), swerved through the entire church, and an unmistakable chill went through the invited guests. This was quickly repaired by an army of attendants, who herded the masses inside the left back corner only, and along the walls. Even before the service, we all got up about five times, because allegedly the president entered. All false alarm, as these were just the official delegations. With each delegation, the guest to bodyguard ratio dropped further. Obviously, no foreign dignitary comes to Haiti without his own private army. The foreign dignitaries were a Taiwanese high official (they do not get invited anywhere else), the Nigerian prime minister (I think), and a selection of Caribbean and Latin American vice-presidents. Given the shaky democratic process by which Aristide had been elected, nobody had sent a real head of state. But there was no mistake when the president entered, the masses had spotted him and straight away started cheering, with banners and flags and all.

The mass itself took long, as is customary in Haiti, and was laced with political, rather than religious speeches. There is anyhow something ironic in a former Salesian priest, a heretic for all intents and purposes, being inaugurated in a Roman Catholic cathedral, together with his wife. There is anyhow something ironic in the whole notion of Aristide being poor: no president in Haiti’s 200 year history (and no Haitian king, or Haitian emperor, for that matter) has ever left office poor, and this is Aristides second term.

The real experience came afterwards, outside the cathedral. Haiti has no army, this has been abolished years ago because of the threat of military coups, but what had gathered outside was as close as comes to a fighting machine as I have ever seen. Heavily armed riot police in full gear, helmets, shields and bullet-proof vests, everywhere. One was on top of a pick up, overlooking the crowds, gun lazily in hand, others were inside cars, windows open and gun barrels resting on the window sills. A pick-up truck cruising through the streets had a machine gun mounted on the cabin, the sort of thing I remember from television footage about Somalia some years ago. Plain scary, and that for a man who claims to be the presidents of all Haitians, after all, he has been elected with more than 91% of the votes. You wonder, what could he possibly be afraid off? The four-wheel drives with dark-coloured glasses, that presumably held the president and his entourage, were quickly whisked through, followed by at least ten heavily armed vans and pick-ups, and afterwards, it was up to the mortals (those VIPs, indeed) to make their own way to the palace. What is usually 15 minute walk, or less, took us 1.5 hours, because all the police was following the president rather than arranging the traffic, and in the end everybody went for themselves (as is also customary in Haitian traffic). The entrance to the palace ended up being besieged from two sides, resulting in a total stand still of all traffic, the obligatory four-wheel drives (there were no saloon cars) parked three rows thick in opposite directions, no way forward, no way backward.

In the end I was too late for the reception, just saw the show, and skipped lunch, which started at around 4.30 anyhow. There is only so much I can take, even at the unique opportunity to witness a presidential installation.

Aristide was first elected in 1990, four years after the fall of the Duvalier regime. His party, called Lavalas Family (lavalas means avalanche, in Creole), quickly became the dominant political force, albeit not in the same we as we would associate with democratic politics. The support, initially massive, was derived from the large masses of poor Haitians, who saw in Aristide, then indeed a poor priest, the man who was going to lead them to prosperity. However, the army quickly took over, and sent Aristide into exile, only to be restored by the Americans through a military invasion three years later. The only American condition was that Aristide would not stand for an immediate second term, so he duly handed over to his crony, Preval. Preval has been pretty ineffective in his five year term, partly because he sacked parliament early on, and than took a very long time to hold parliamentary election. These elections were finally held in May 2000, a joke whereby Lavalas miraculously picked up 98% of the seats. Lots of evidence of vote rigging, intimidation, police removing ballot boxes half-way the process and “returning” them later, you know the tricks when you see them. International observers duly condemned the elections, and donor countries froze not only foreign aid, but also balance of payment support, something that really hurts in a country like Haiti, especially with oil prices close to US$30. Result was a further reduction in power supply, increasing prices, a collapse of the local currency, and increasing violence. Every attempt to reach a compromise was quickly turned into further polarisation between the international community and the Haitian government, which, for instance, loudly pronounced that any foreign influence could not be allowed to compromise Haitian law. Not surprisingly, Haitian law says that once election results have been officially published, they cannot be altered anymore. Not surprisingly, the electoral commission in Haiti had been under severe pressure to announce the election results, which in the end were only made public after the chairman of the electoral committee fled to country. He has since publicly condemned the way the election results have been determined to avoid a run-off in 10 of the 25 election districts. And it is all so silly, Lavalas would have got a majority anyhow, there was no need for manipulation, during and after elections.

Anyhow, the parliamentary elections were widely seen as paving the road for the come back of Aristide through the November 2000 presidential elections, which is precisely what he did, claiming to have won 92% of the votes, with a turn-out of over 3 million people. Quick arithmetic suggest that this is not easy, in a country that has perhaps 8 million inhabitants, of which almost half are under 18 years old anyhow, and that lacks infrastructure. General wisdom has it that turn-out was closer to 10%, Haitians being fed up with pointless elections, that were anyhow, and predictably, boycotted by the opposition. “The opposition” is in reality a loose group of small parties with widely varying objectives, not a real alternative for Haiti. However, in good Haitian tradition, the opposition has named their own president, and their own cabinet, which of course has no constitutional basis, not even the most humble mandate, and no chance of making any impact at all. Yet, instead of letting it go, the government found it necessary to publicly announce that it will not tolerate an alternative cabinet, and the whole issues has now been polarised beyond proportion. Again, so silly. No doubt Aristide has lost some of his initial popularity, as he has not yet been able to lead the poor to prosperity (he merely led himself to prosperity), but he is still the dominant force in the country, with few alternatives.

Next: Jacmel in the south