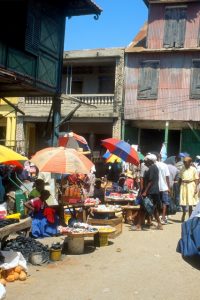 Lovely Jacmel, the pearl of the south, is a bit rundown, but has great atmosphere, its share of historic buildings and a fabulous location on the coast. 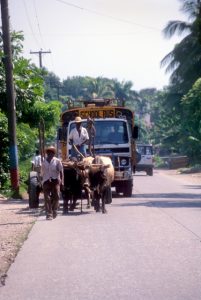 the road to Jacmel, or, rather, the traffic 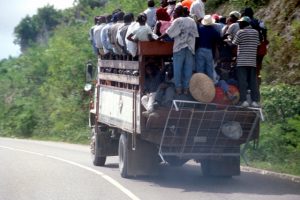 and the Jacmel bus, coming from Port-au-Prince

One of the more attractive, yet easy excursions in Haiti is a trip to the south, which usually starts at Jacmel. A drive to Jacmel from Port-au-Prince takes 2-3 hours, mostly depending on the traffic in Carrefour, a slum neighbourhood that envelops the Route National #2 just to the south of the capital. But once out in the countryside, there is normally little traffic on the generally good tarmac road, except for the occasional horse-drawn cart.

Halfway, just past Leogane on the coast, the road turns into the mountains, and winds its way up, and down again, through beautiful, although totally deprived countryside. If ever one needed an example of what deforestation looks like, this is the road to take. Yet, the hills are still being intensively cultivated, and lots of narrow terraces have been constructed on the steep slopes. Harvest is, in a typically Haitian way, protected from animals by tying it high up in the trees, some trees even having been specially prepared for this. But the real highlight of the journey are the sellers of tiny little bananas, Ti Malice, famous throughout Haiti. Every self-respecting traveller will stop here, and buy some to take back to Port-au-Prince. 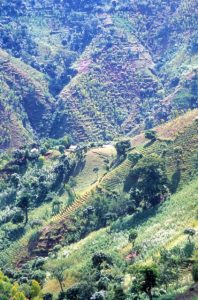 the countryside, once the road has turned into the hills 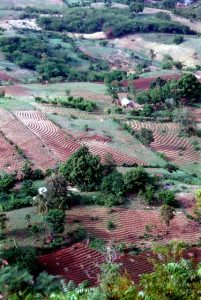 despite deforestation and loss of top soil, the Haitian farmer is still trying – on the way to Jacmel 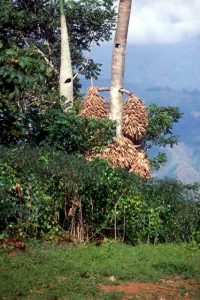 this is how the harvest is being protected from animals 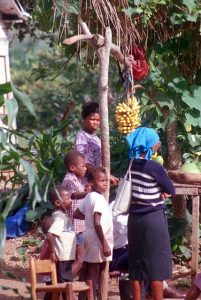 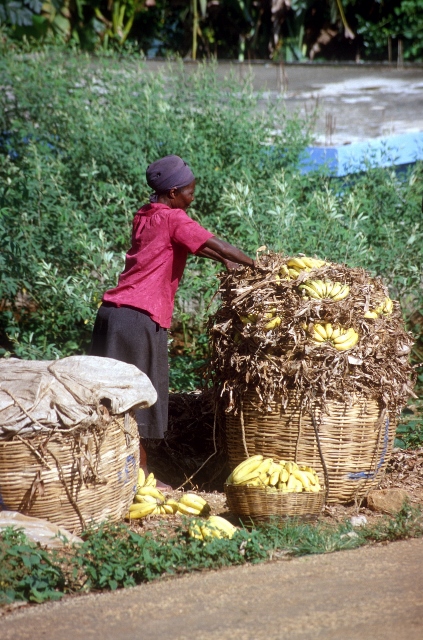 a woman preparing baskets full of ti-malice, for transport 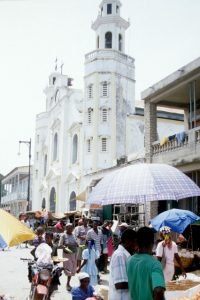 the Saint Jacques and Saint Philippe cathedral in Jacmel 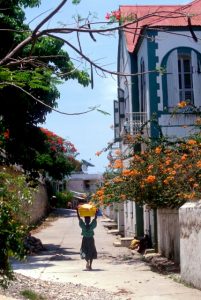 a street in Jacmel, full of flowers 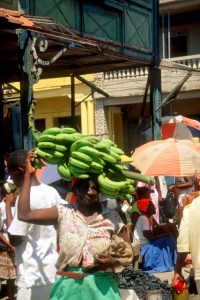 Jacmel itself is a lovely, if somewhat rundown place, with narrow streets and old wooden houses, generally of a simpler nature than the Port-au-Prince gingerbreads. The iron market in the centre – built in Belgium in 1895 – is also much smaller, but equally colourful, and equally chaotic, with merchandise being sold inside as well as outside the market, and one side entirely devoted to piling up rubbish – which means that you cannot drive around the market anymore. Several streets lead down to the black beach bordering the Bay of Jacmel, which is where some of the fishing boats land their catch. 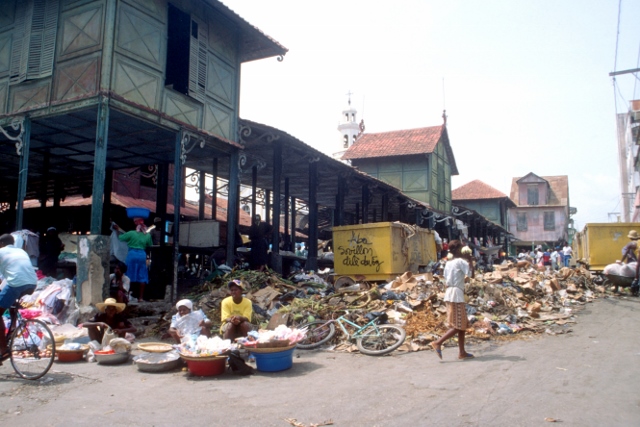 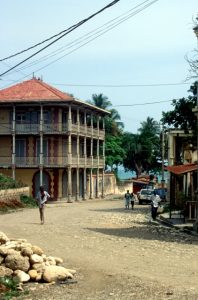 the street that leads to the beach 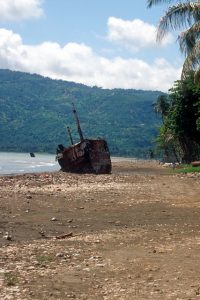 lonely ship stranded on the beach outside Jacmel 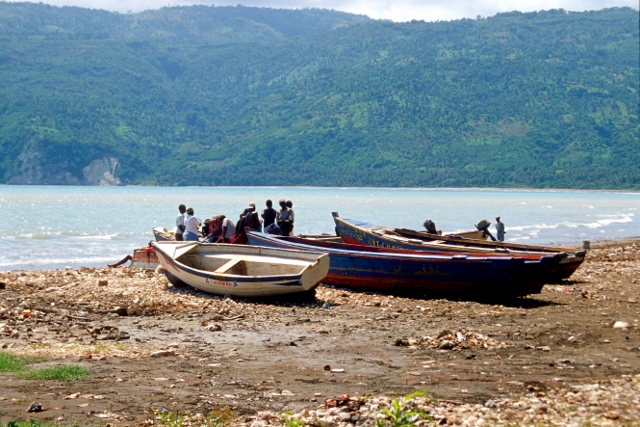 fishing boats landing their ware on the beach, Jacmel 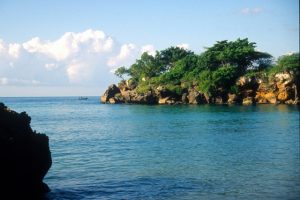 Cyvadier Bay, one of the prettiest along the south coast 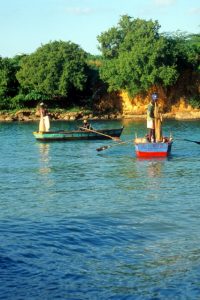 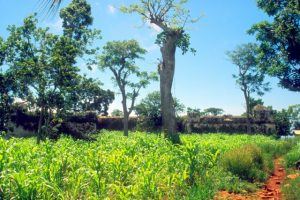 the Fort Oge, another on Haiti’s 18th Century castles 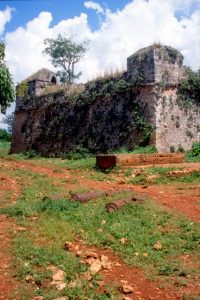 the defense towers of the fort 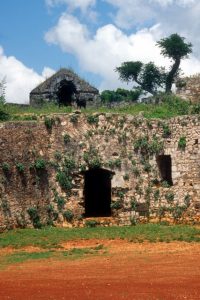 and an entrance in the outer wall

About ten kilometres east is the small public beach of Cyvadier – with private hotel of the same name. This is perhaps the prettiest cove along the coast. A little up into the mountains is Fort Ogé, and old fort built at the beginning of the 19th Century, like the Citadelle in the north to defend against a possible French counter attack. It is much smaller than the Citadelle, and sees a lot less visitors, too. Yet, it is a nice place, definitely authentic, and providing wonderful views down to the coast. 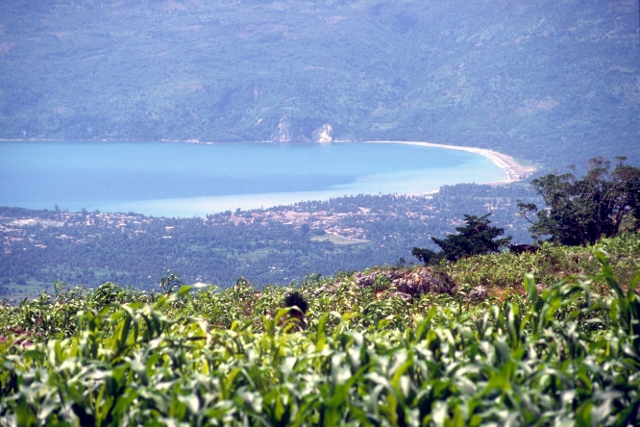 view from Fort Oge, down to Jacmel 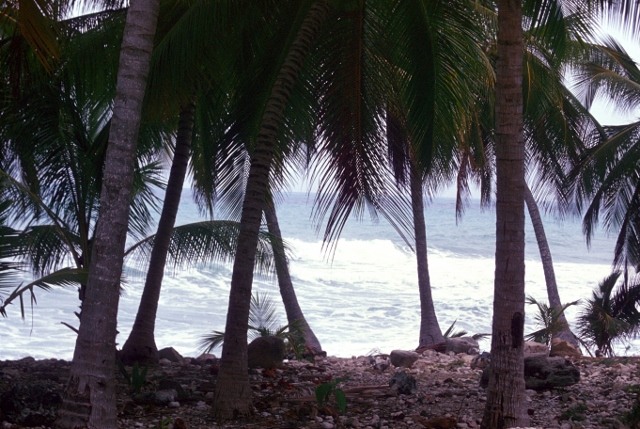 the coast at Marigot, a little further east from Jacmel