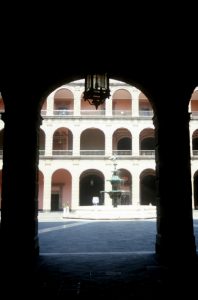 courtyard of one of the ministries in Mexico City, many of which are public galleries

Mexico’s huge capital city has an equally huge variety of attractions, from weekend boating to monuments and murals. 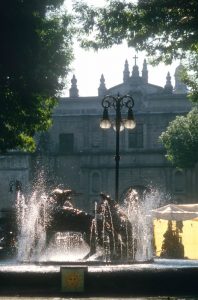 a fountain in a square in the colonial-style suburb Coyocan

As we arrive for the weekend, we do the typical weekend program, those things the Mexicans also do on a weekend.  On Saturday to Coyocan and San Angel, a beautiful suburban part of the city, with a large and famous artisanal market selling all sorts of things, paintings outside, and the inevitable silver and gemstone jewelry that we would encounter everywhere later on. The area also sports, amazingly, a watercolour museum – but I am not sure if Mexicans flock to the latter. And on Sunday boating in Xocimil, touted by some as “Mexico’s Venice”, even further away from the city centre. And no comparison to Venice, by the way. The published attraction is the flower market, which is actually poorly stocked and rather poorly presented, in a number of different, and isolated plots. However, in reality this seems all utterly unimportant, in fact Mexicans come here for fun, renting a boat, and loading it with food and drink. And if you didn’t bring enough, food and drink can also be bought from randomly floating boats that sell corn, tortillas, quesedillas, beer in plastic glasses or bottles, anything really – at completely random prices, too, at least for the foreigner. To liven things up, the locals will charter the occasional mariachi band or xylophone player, in their fantastic and impressive costumes, tight black suits with all sorts of decoration, or white uniforms with colourfull ribbons, and invariably capped by large sombreros. The musicians are operating from separate canoes that will be temporarily tied to the one who rents the band for a romantic or funny song, whatever the occasion. By midday the canals are so full, that salesman with suitcases full of silverware and other tourist rubbish easily walk from boat to boat, displaying their ware in the process, and hopping off on the next boat after the sale, or rejection. 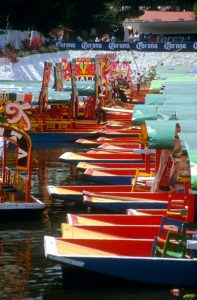 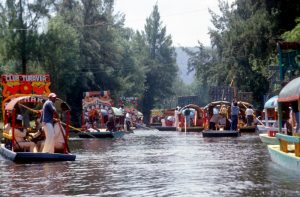 and soon it is rush hour, in Xocimil 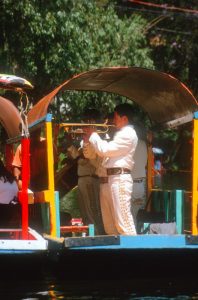 important element is the mariachi band 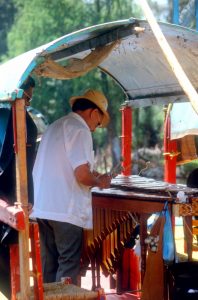 or a xylophone player, less noisy 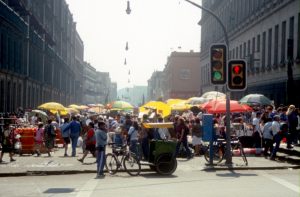 market in one of the city’s main streets 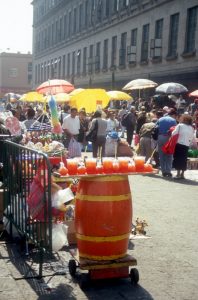 including orange drinks, isn’t it sweet?

After the weekend, Monday and Tuesday are for the tourist sites in the city, and they are indeed impressive. Pre-colonial ruins, colonial buildings, and post-colonial art in the form of huge murals, something for every taste. It is just that everything opens so late. Mexicans don’t work hard, at least they do not give the impression. There is no point leaving your hotel at nine, shops and museums will only start at around eleven or so, street vendors are still busy unpacking their stuff by lunch time, which is anyhow not before 1 or 2, preferably later. Some restaurants will only open at 8 in the evening, or sometimes not at all, for instance if it is Saturday or Sunday. And it is not that they, or the shops, or the street vendors, continue excessively late at night. There is no sense that extended opening hours could actually improve turnover. Which may be at least partly true, as no self respecting Mexican will be shopping before 11 in the morning, or eating before 2 in the afternoon. 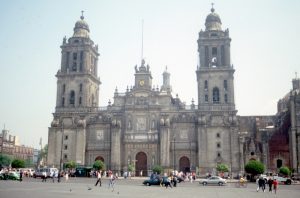 the cathedral, on the Zocalo 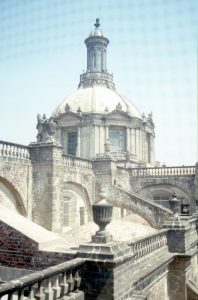 from high up, a view over ove of the cupolas decorations on the outside of the cathedral 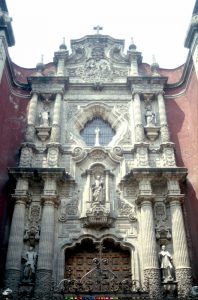 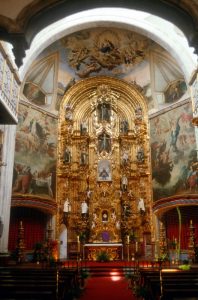 The first place to go is the Zocala, the main square, where the National Palace is, but also, in the neighbourhood, the Ministry of Education and many other official buildings with large murals, the type of art for the people that developed in the ‘30s. This is where we got to know Diego Rivera, especially impressive in his earlier works, painted in the courtyard of the Ministry, and RufinoTamayo, amongst others. Much of this is dedicated to Mexican scenes, country life, struggle of the poor, despising the bourgeois, and whatever else was popular at the time; some include pictures of Trotsky (who lived in Mexico). Also at the Zocalo is the cathedral; especially memorable when you join a tour past the towers, and across the roof, where hell breaks out when both towers begin to contribute to the bell concert at noon. From there via the squares of Santo Domingo, very tourist oriented, and Lorento, with much more local flavour, past the little church Ensenada, squeezed in between a row of houses, to the ancient ruins of the Templo Mayor, which, although the site was closed, are still visible from the outside. Next is the Palace of Bellas Artes, with more murals, and the Mining school nearby, with a couple of impressive meteorites on display in front. Rivera’s masterwork ‘Dream of a Sunday Afternoon in the Alameda’ has a separate museum on the other side of the Almeda, with just this one painting. 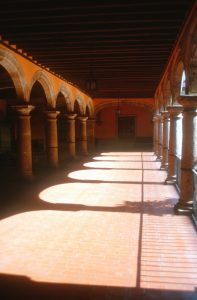 a corridor in one of the ministries 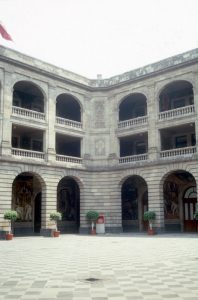 the ministry of education, with several Diego Rivera murals in the galleries 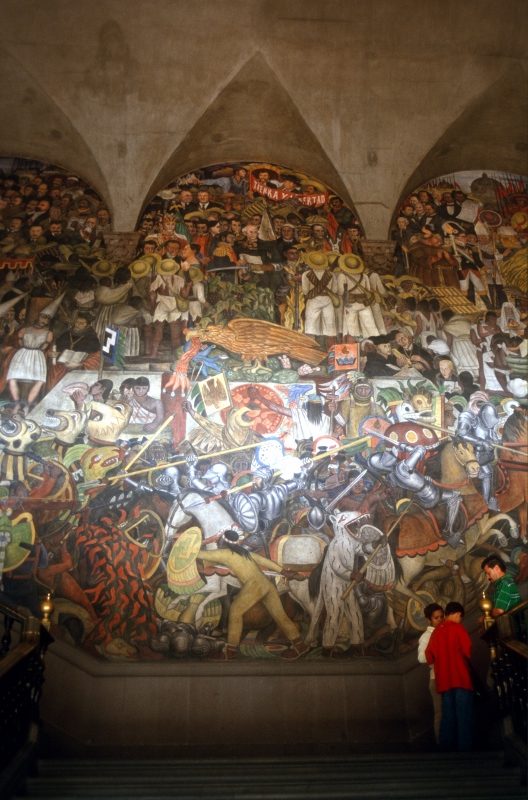 one of the huge murals in the ministry 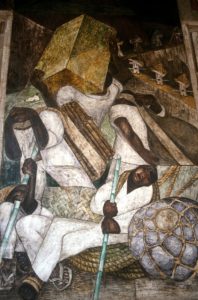 detail of another mural 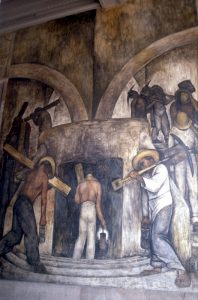 and yet another one, depicting social unjust, to be sure 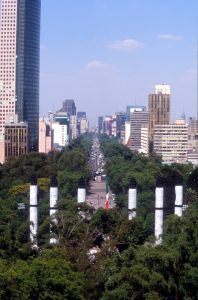 Contrasting the old architecture is the Paseo Reforma, with modern buildings, and lots of traffic (dominated by old VW Beetles), leading to Capultepec Castle – a token of the short French occupation of the country -, which, by European standards, is nothing special. However, it supports a nice view back to the Paseo. Close to the Castle is the National Museum, which has an absolutely brilliant overview of Mexican history, and a wealth of beautiful pieces, especially on the pre-columbian periods.

On our last night in town, we dine, romantically, at a rooftop terrace near the Zocalo, with the view of the illuminated cathedral towers across and to the drum beat accompanying Aztec dancing below. The ant eggs were great!

next: our first driving experience in Mexico