My House in Damascus 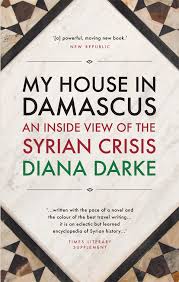 I got to know the books of Diana Darke in the early 1990s, when I lived in Turkey. Ms. Darke has written two entertaining, and excellent travel guides about this country, characterized by her thorough knowledge not only of the culture, but also of obscure places where to find the best examples of, say, Armenian frescos. So when I found “My House in Damascus” (2014, 2016), I bought it without thinking twice. And once again, it didn’t disappoint.

The book is a mixture of narrative, about how Ms. Darke went about finding, buying and restoring an old court yard house in the old town of Damascus, of exposé on Syrian history, of description of Syrian society, and of the effects of the revolution of 2011 and the subsequent crack down of the regime. At the same time it is an emotional plea for all of us, in the West, to recognize the real issues in Syria, to step away from the media-dominated pictures of death and destruction, and to see how a developed, well-educated society where different groups have lived together for years, traditionally tolerant, where Christians and Muslims used to visit each other’s mosques and churches, is being eroded from inside. Initially by an increasingly desperate regime clinging on to power, but subsequently by opportunists stepping into the power vacuum wherever it manifests itself, like the emergence of IS, but also the multitude of rebel groups, many of them equally active as criminal gangs, operating in an increasingly lawless society, dominated by fear. And how we are all looking away, aloof.

The power of Ms. Darke’s book is that of her own experience, her many interactions with real people in Syria, with the silent majority who have nothing to do with the fighting, just want to get back to their old life. The reality of her many friends, who we get to know throughout the book, who we sympathize with, before we hear how they and their families are being affected by the crisis. But also the reality of betrayal, by another of her supposed friends, and how easily members of that silent majority fall themselves for opportunism.

Written by somebody who obviously knows about Syria, this is a beautiful story, of a house, of a number of individuals, of a people. Occasionally, the narrative is a little chaotic, no doubt because Ms Darke started the book in 2010, before the revolution, and my copy is from 2016, with a chapter added after the initial 2014 publication. The book offers no solution, despite the series of wholly unrealistic suggestions of Ms. Darke at the end, suggestions she recognizes herself as dreaming; the one line from the book that will always stay with me and that sums up the problems of the Middle East, is “a compromise is a concession, a concession is defeat, and defeat is death”.