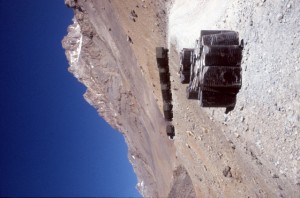 if there is nothing else left, there are the oil drums

The first part of the Manali to Leh Highway has plenty of snow in July, and road works to keep the glaciers at bay

With Mandi only at 800 m, and Manali already at 2050 m, we were steadily getting to higher altitudes.  But nothing had prepared us for the next stretch of road, the 475 km from Manali to Leh. Some people claim to be able to do this in one very long day, but most opt for an overnight stop in Sarchu, roughly halfway. 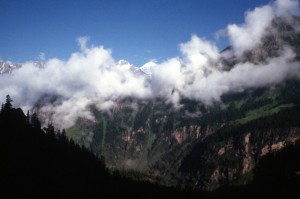 outside Manali, the last wooden slopes 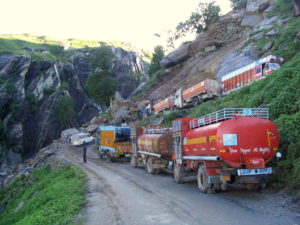 We had again opted for a rented car with driver, to allow flexibility, and that was probably a good decision, given the state of the road. Leaving early morning, we started with driving past hundreds of trucks, all parked along the road outside Manali, and no doubt plying the road to Leh: this is the main supply route for Ladakh. Just outside town, the road quickly climbs through attractive wooded country side, first palm trees on the slopes, later to be replaced by pines, to Rohtang La, the pass at 3978m, only to fall back again to around 2500 m, ready for the next series of passes. But first comes Keylong, the last ‘sizable’ town on the way to Leh. In fact, it is rather small, a couple of blocks of houses against the valley wall. An hour or so after Keylong, in the middle of nowhere, is the Ibex Hotel, which advertises itself on billboards as the Height of Glory and Ripples of Romance, including a shopping centre – with turned out to be no more than a glass vitrine on the side of the restaurant where we had lunch. 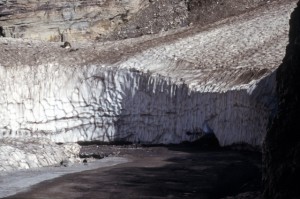 a glacier trying to cross the road 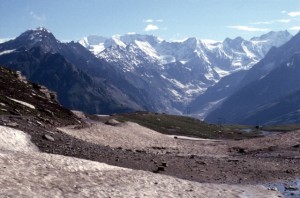 the view from the glacier, to where we are going 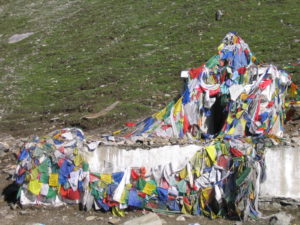 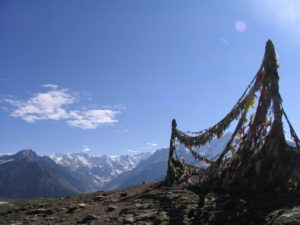 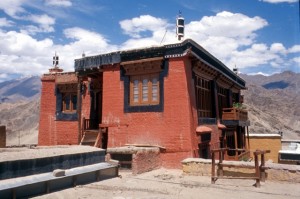 Past here, the area becomes really desolate, or “beyond the inhabitable world”, as one of the descriptions has it. Indeed, nobody seems to be living here anymore, no hamlets, no real signs of permanent human presence, no cattle, no sheep. (There may be some nomadic people – we did not see them). The road goes nothing but uphill, towards the Baralacha La, at 4883 m. Gone were the trees that decorated the slopes around Manali. Instead, on this day in mid July, extensive snow fields stretched as far as one could see; glaciers, recently decapitated by the army engineers who keep the road open during the summer, tried to get back onto the road. Snowy peaks in all directions, wherever one looks. The road – and the empty tarmac drums that have accrued on the valley slopes below the roads -, are really the only signs of human interference here, for the rest nature dominates. And nature will try year after year, winter after winter, to destroy what the Indian army has put in place. 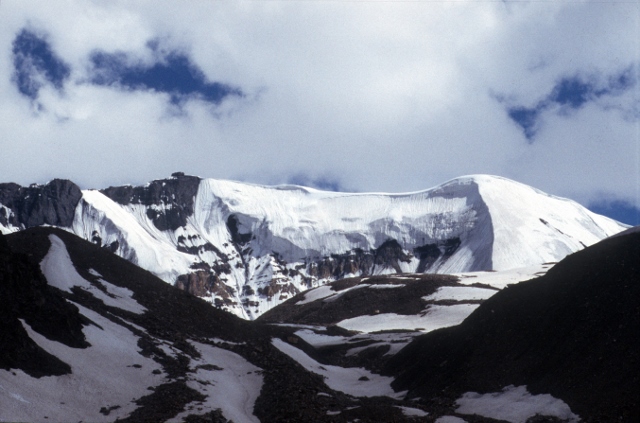 plenty of snowy peaks around

Landslides are a frequent problem, and may block the road for anything between a few hours and, presumably, days. At one site, where a large army convoy was held up, a group of maybe 40-50 men were working to clear the largest blocks of the landslide and cover the rest to create a passable track. Just watching the progress was painful: a few men are actually carrying one or two rocks to cover the holes, a few others are rolling the largest blocks slowly away; another is, on his own, trying to reduce a large block to smaller, useful pieces by smashing his sledge hammer into the boulder, and amazingly, actually succeeding in halving it; two more are using one spade, the first one puts the spade in the earth, the second one pulls a rope at the bottom, and so fills the spade. But most men are looking on, not even pretending to do anything at all. Eventually, it is decided that the road is open again, and that traffic can pass. In the event, some 30 army trucks passed first – the army always has right of way in this part of India, assumed to be so very vulnerable with enemies like China and Pakistan around the corner. 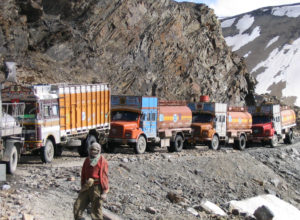 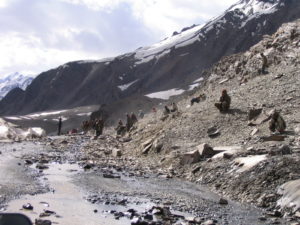 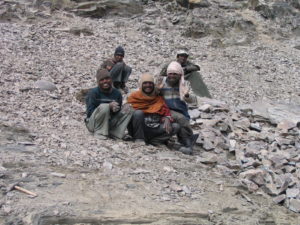 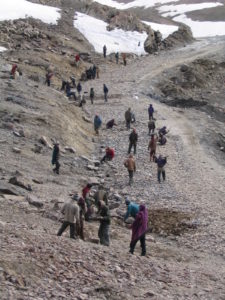 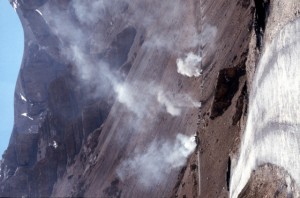 the smoke of heated tarmac for road repairs 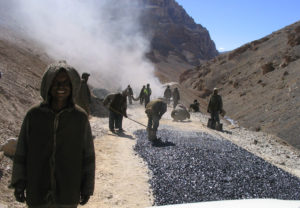 Even without the landslides and the glaciers the road was in bad condition, often unsurfaced, full of holes. Frequently streams cross the road, or worse, follow the road for a while, further eroding it. It must be almost impossible to maintain, in the four months a year that the road is in fact open. Not that the Indians are not trying. Along the entire road are tented camps housing labourers, often imported from poor states like Bihar. They must have a very difficult time, in the cold and at an unusual altitude, no doubt for a very meagre salary only. In many places road repair crews were working, often without any heavy machinery. Large pans were used to heat up the tarmac, which was then mixed with gravel, transported by wheelbarrow, and distributed over the road surface with spades and rakes. As always in India, some worked, most looked on, but there was more sense of urgency here than at the landslide clearing sites that we had passed.

At around six in the evening, after 12 hours on the road, we arrived at the midway tented camps of Sarchu, Altitude 4200 m, and as soon as the sun went down, very very cold indeed. Sarchu is not a village, it is just a large camping, set up for the four summer months in which travel along the road is possible. There are no facilities whatsoever, just a number of tented camps, around ten of them, with perhaps 15-30 tents each, that provide basic accommodation and food for travelers. Tents were simple, but comfortable enough, two beds, a toilet, a mirror and a bucket of water, and with a sufficient number of blankets. And there was little else to do than getting under those as soon as possible.

next: from Sarchu to Leh. 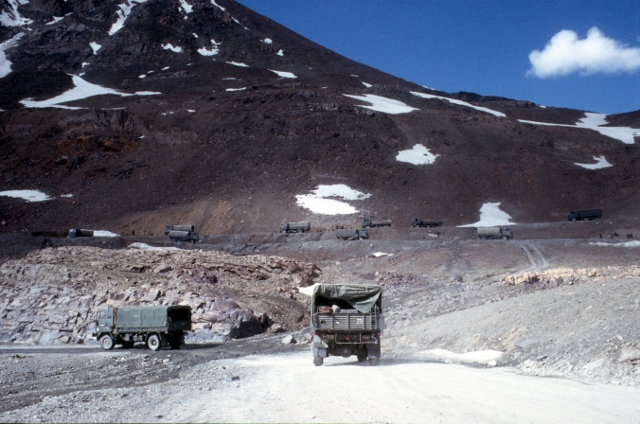 army convoy winding its way up