Agra and the Taj Mahal Nagapattinam 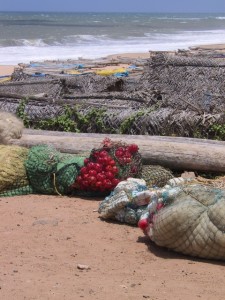 colourful fishing nets on the beach of Kanyakumari

Land’s End of the Indian Subcontinent.

Kanyakumari, also known as Cape Comorin, attracts its fame from being the southernmost part of continental India (the Nicobar Islands extend further south), and this is reflected in the number of hotels the town has.Here is where the Bay of Bengal, the Arabian Sea and the Indian Ocean come together. A little temple marks the place, and a large statue on an offshore island watches over the tourists and pilgrims bathing in the sacred waters of the sea. Kanyakumari is a very spiritual place for Hindus, who have constructed a small temple for Diva Kanya – the central part of which is off-limits for non-Hindus, unfortunately. 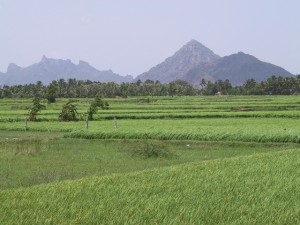 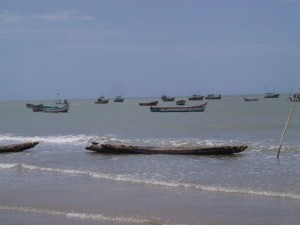 fishing boats lined up for the coast of Kanyakumari

The approach to Kanyakumari is often from Trivanderum, the nearest airport in neighbouring Kerala. From here it is a 2-3 hours drive through an increasingly attractive landscape, dominated by rice paddies and palm trees, and with the occasional granite hills, part of the Western Gaths that runs all along the western coast, poking out of the mostly flat surface. 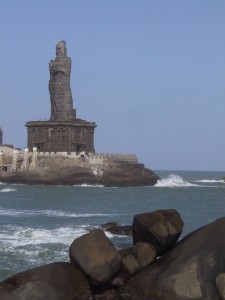 large statue on a rocky island off the coast of Kanyakumari 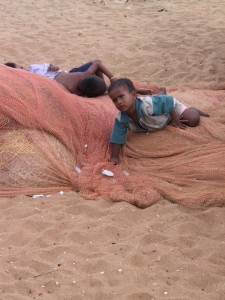 children playing on the beach of Kanyakumari

The beaches around Kanyakumari are mildly attractive, with lots of fishing activity, boats and nets, even though the sea can be pretty rough in places. The most impressive sight, however, is a huge wind farm just outside the town, with hundreds if not thousands of windmills, wherever you look. Total power generation is still only 2 MW, pretty small. Ironically, the windmills surround the Kalpakkam nuclear power plant, a lot better hidden by the Indian government, and regarded as a strategic asset.