Bhopal and the Sanchi complex Karel Appel Exhibition in The Hague 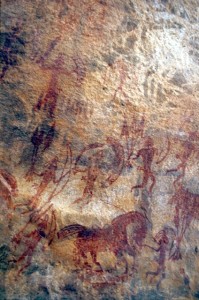 Madya Pradesh is home to some of India’s preeminent rock art, of which the Bhimbetka caves are the best example

Just south of Bhopal are the Bhimbetka caves, a site with more than 700 rock shelters that have been extensively painted. The oldest of the paintings are, depending on which source you trust, anything between 10,000 and 30,000 years old, whilst the latest maybe dating back to the Middle Ages; several phases have been painted on top of each other, in red or white, and occasional green and yellow, and in different forms of clarity and quality. Unfortunately, only sixteen of the caves were open to the public, when we visited in 2005. But the small sample of paintings accessible was well worth the effort of coming here. Some were rather basic, others showed an amazing level of detail, really exciting – at least for me. Of particular interest was shelter number 8 (??), where we crawled under the barriers to get a close-up look of some of the overhead paintings, the only way to really appreciate the art. 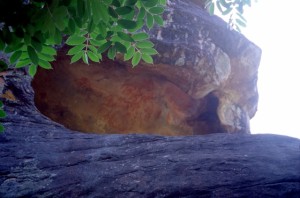 one of the Bhimbetka rock shelters 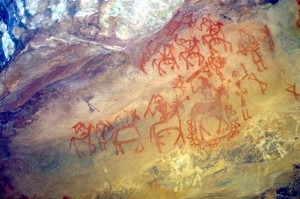 details of the rock paintings 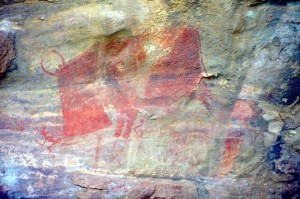 another of the rock paintings 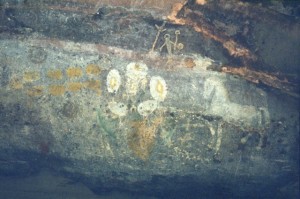 not one of the oldest, I presume, a horse 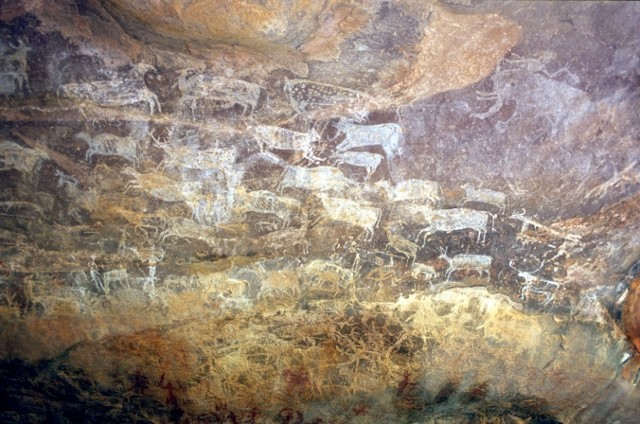 a mounted elephant chasing the cattle?

Further south, near Pachmarhi, are more rock shelters with cave paintings. However, we were less lucky here, as the area where most of the shelters are – Bhrant Neer – was located in a forest park, that was closed for the monsoon seasons. Even obtaining a 10 Rupees permit from the forest department in town did not alleviate the problem, and we had to make do with just visiting a few shelters at the edge of the park. Still, it allows for a nice enough walk, through a narrow canyon and up the hill to the south side of Monte Rosa. Paintings were not as spectacular as in Bhimbetka, but the setting, the views and the fresh air were enough of a compensation. Further shelters, like Chieftain’s Cave near the village 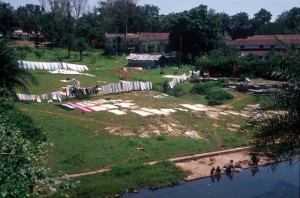 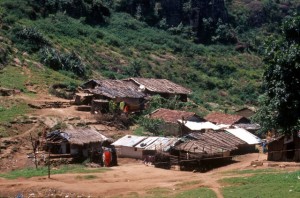 more houses in the countryside 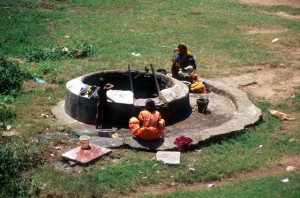 women around the well

of Pachmarhi – populated by tribals who had made the caves their homes -, and Kites Crag, high up along a stream a little further, were actually a bit disappointing; in Kites Crag, the most visible paintings were actually very recent ones, where somebody had come with some white paint to draw grotesque figurines, annoyingly covering some of the more primitive, and far more artistic, images (Unfortunately, that is more often the rule rather than the exception, as we have seen elsewhere).

At least, the cave paintings we have seen here, and even more so in Bhimbetka, clearly form the basis of present day tribal art in India, decorating wood works and fabrics not only in Madya Pradesh, but also in other states. If they could only refrain from experimenting on top of the originals… 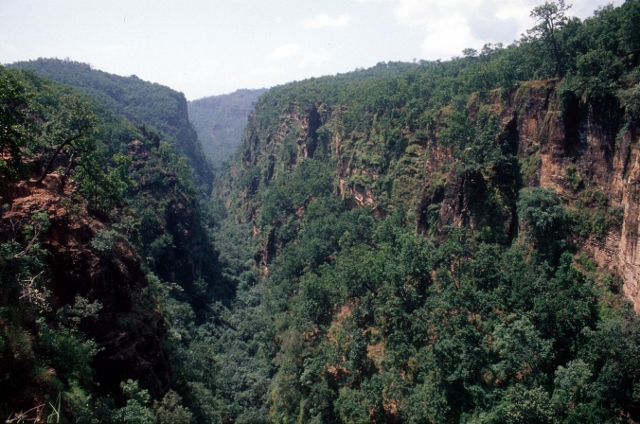 view from the slopes of Mount Rosa