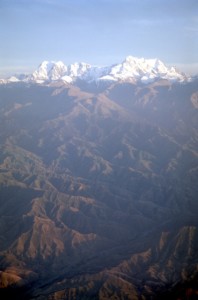 Tienshan Mountains, from the plane

A local flight from Dunhuang to Urumchi, and a spectacular view of the Tianshan Mountains.

On the next leg of our journey we lost the credibility of the entire back packer community. We cheated, and instead of taking the train via Hami to Urumchi, an 18 hour trip which is described in the guide books as a particularly uninteresting stretch through the desert, with absolutely nothing to see right nor left, we decided to fly. This reduced our travel time to two hours, and provided us with much more attractive views from the plane that we would have got from anywhere along the train tracks. 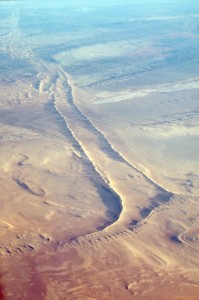 Because there are only three fights a week out of Dunhuang we were keen not to miss the plane. Not knowing exactly where the airport was, we decided to take the airport bus from town, despite the fact that the bus left almost three hours before departure of the plane. The airport turned out to be ten minutes drive. The bus was packed, not with travellers, but with airport staff, and although the airport was deserted when we arrived, after five minutes, or so, uniformed police appeared, the information counters opened, desks were being manned again, the place came to life. After a long wait the plane arrived, too, a brand new 70 seater of Italian origin, en route from Xi’an to Urumchi, operated by the reputable Xinjiang Airlines. It dropped off a group of 10, maybe 15 tourists, and when we boarded, all six of us, we turned out to be the only passengers left on the flight. We boarded last, of course, and believe it or not, one of the other four had managed to get into our seats. And believe it or not, the air hostess was about to insist that the guy would go sit somewhere else! The flight itself was brilliant, with fantastic views over the dunes in the early evening, and over the desert, and the occasional flares of oil fields in the distance, oil and gas being the latest promise of the Taklamakan desert. The approach to Urumchi was just as spectacular, flying past the snow-capped peaks of the Tianshan mountains, just outside the town. And sure enough, news of our limited number of passengers had not reached Urumchi, yet. We were met by a huge airport bus, whilst a small van would have done, but alas.