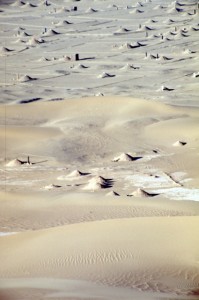 A dune landscape and the Mogao Caves in Dunhuang 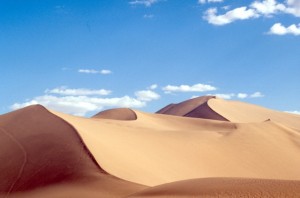 The tourist attractions in Dunhuang are the local sand dune scenery and the Mogao caves, reputedly the most beautiful Buddhist caves in China. The dunes, some 200-300 m high and just outside town, have also been high-jacked by the local tourist industry, who have erected a gate, which in China is sufficient to start charging entry. Apart from the dunes, there is nothing, really, no facilities, no restaurants, only a train of smelly camels for hire, and the string of souvenir shops outside. The dune landscape is, however, spectacular, although it requires a tough, hot climb to enjoy it. 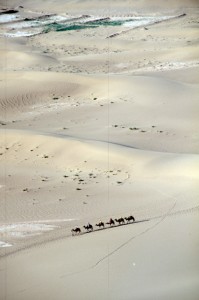 camel train in the desert

The Mogao caves, where Stein found his manuscripts, are about half an hour’s drive out of town, and consist of an enormous complex of almost 500 grottoes. The site is slightly disappointing in that the outside of the caves has been fortified with concrete, which also supports the metal doors. All caves are locked, and as a tourist one is not allowed to roam freely, one must join a tour, which visits 15-20 caves at the most. Even our local guide had not been in more than 50 caves herself. The sculptures, and especially the frescos, are fantastic, however, although the site does not look particularly original anymore. No doubt at least partly because the money the priest Wang received from Stein, and others, was spent entirely on restoring the caves the Chinese way, which often caters for a rather gaudy taste.

Examples of Dunhuang art have been captured in a separate entry, for enthusiasts.