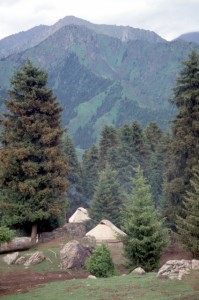 yurts in the Tianshan Mountains

Yurts, lakes and Chinese tourists: one of those three doesn’t belong in the concept of peaceful unspoiled nature.

Just outside Urumchi, high in the mountains, is Tianchi, or Heavenly Lake. When we visited, on a day tour from Urumchi, the weather was cloudy, obscuring the snowy peaks that no doubt surround the lake. We had hoped to spend a day in peaceful natural surroundings, but, as every tourist attraction goes in China, Heavenly Lake is heavily developed. The cable car, this other characteristic of the Chinese tourist industry, was not operating, but for the rest the place was all and everything one should have expected. Despite this being an area of exquisite natural beauty, inviting long walks, there are no trails to follow, all paths are concrete, or cobble stones, and up or down hill is by stairs. The lake itself is crowded with speed boats, and the lake slopes were populated by Kazhak yurts, in large camps, complete with horses for hire – the photo opportunity rather than long rides through the forests -, and Kazhaks who ensured that you did not misunderstood the reason for the horses being there. Our tour was herded into one of the yurts, for ‘typical Kazhak lunch’, an unappetising if not revolting combination of weak, milky tea, last week’s biscuits and last month’s butter. We tried to get away from the tourists, but we failed, the entire slope was covered with Chinese groups climbing the hills, many of them having a noisy picnic – they obviously knew about Kazhak lunches. Usually, about half of the group would be climbing, whilst the other half would stay behind, but unfortunately, they kept on talking to each other, necessarily louder and louder the higher they got. So much for peace and quietness in unspoiled nature. 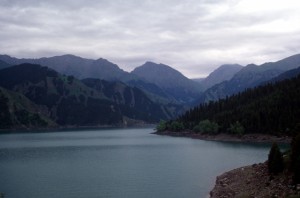 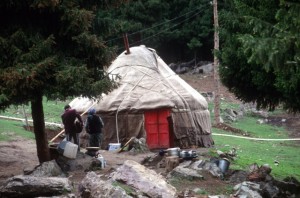