(30) In Kashgar Tamil Nadu after the Tsunami

(31) Across the Karakoram Highway snow-capped mountain along the Karakoram Highway

The ultimate mountain crossing, the Himalayas, awesome! And the lovely Hunza Valley in Pakistan.

The bus to Pakistan departs around noon, for a two-day trip over the Karakoram Highway. The bus is mainly populated with foreign tourists and Pakistani traders, and for the first time during our travels contained only very few Chinese. At the end of the first day the bus reaches Tashkurgan, the last town on the Chinese side of the border. On the way we had already been stopped three times, for passport control, and first thing upon arrival in Tashkurgan was a trip to the border police. Next day, we returned to the same police post, showed our passports again, to the same people, and continued in the direction Pakistan, only to be stopped two hundred meters down the road, for passport control. The Chinese are paranoid about people leaving their country, and that with a 1.2 billion population. Conspicuously, the only three Chinese people in our bus were refused exit, despite, as far as we could see, valid passports and visa. They were simply left behind, the Pakistani traders did not want to hear about waiting, and must have encouraged the bus driver, somehow. 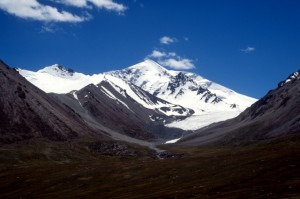 The route is a spectacular one. First part, in China, is gradually rising from 1200 m, in Kashgar, to some 3700 m, at which level Tashgurkan is located. The pass, and the border crossing, are at 4735 m, touted as the highest public highway in the world (although in Tibet and in India some passes are well over 5000 m).  As a matter of fact, the road is far from public, as only the selected few approved of by the Chinese police are allowed to travel it, and to call it a highway is stretching the imagination. Although most of the road is a relatively good condition two lane affair, occasionally whole sections have been washed away, either by the main river, or by tributaries crossing the road. Landslides and rock fall have also taken their toll, but overall the obstructions did not pose any major difficulties for the bus. The road is flanked by snow-capped mountains, and every turn provides new, and more breathtaking views of the peaks. Some variation is offered by the beautiful Karakul Lake, and by a weird dune landscape, half way up. The occasional camel will roam around, and here and there single yurts, or groups, can be spotted, although population in this part of China is certainly not dense. 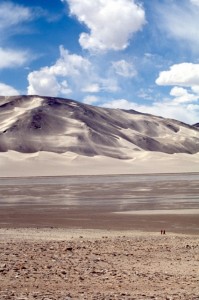 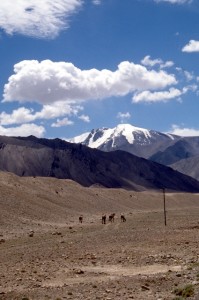 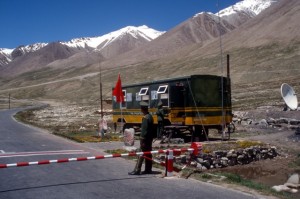 Once in Pakistan, the scenery changes, from the high, barren plateau into a series of deeply incised river valleys, increasingly green again. The road selects one of the valleys, and follows the stream steeply down, from confluence to confluence, until it has become the Hunza River. Peaks are more isolated now, not the broad ridges from the Chinese side anymore, but often singularly towering above the rest of the mountains. Entry into Pakistan is very relaxed, especially compared with the Chinese paranoia. At the border is a checkpoint, the obligatory passport control, and then the bus continues to Sust, a small village about two hours drive from the border. The bus dumps its passengers, with luggage and all, on the market square, and you go and find the customs office yourself. This involves a tortuous route to a place somewhere at the edge of the village. A stamp in the passport is all, nobody to check the luggage; you could have left it in the village, really. The philosophy is probably that there is not much worth smuggling out of China, and if you had done so, the Chinese would have caught you anyhow. 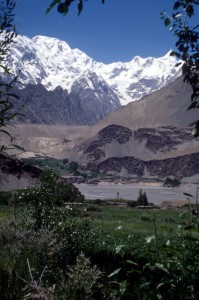 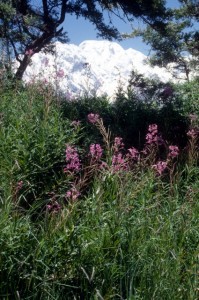 the first flowers in a long time 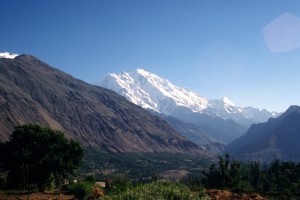 Hunza Valley with Rakaposhi in the background 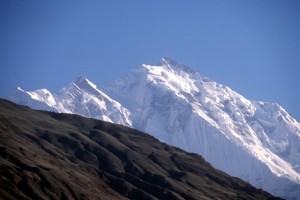 the icy top of Rakaposhi, one of Pakistan’s highest mountains at 7788m 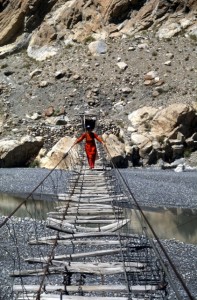 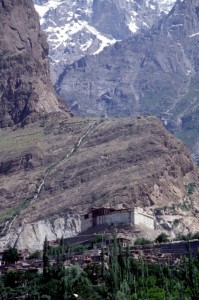 fort in the Hunza Valley 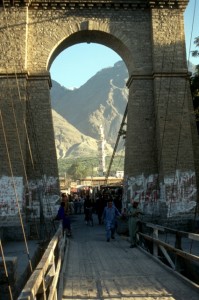 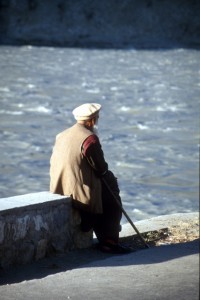 From Sust the Karakoram Highway continues to Gilgit and Islamabad. We made our way down to Gilgit in a few days, stopping in Passu and Karimabad, first in a Suzuki pick-up converted into a taxi, and later in rented four-wheel drive jeeps. The jeeps have open roof tops to allow an uninhibited view of the awesome mountain peaks, and free sunburn. The attitude of the jeep drivers is somewhat contradictory, as they will edge their cars with all possible care through the smallest of all potholes, but at the same time they will charge as fast as possible into a blind bend, not only running the risk of capsizing, but also of frontally colliding with, for example, a jeep doing the same thing in opposite direction.

The Hunza Valley is an exceptionally beautiful part of the world. An easy, day-long trek brings you past fast flowing rivers, across suspension bridges, across meadows full of flowers, to the front a glacier. Imagine the possibilities if one would have more time than we had.

In Gilgit, hailed as the first major town on our route into Pakistan, but in reality not more than a dump, we managed to get tickets for next day’s flight to Islamabad. This flight, again spectacular in that it flies through the valley, rather than over the mountains, allowing a fantastic view from the window, avoided a further fourteen hour drive, and brought us back to relative civilisation, and a direct flight connection with the rest of the world.