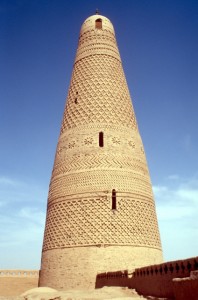 Chinese road traffic rules explained, during a tour of Turpan’s main attractions, its mosques and minarets, its market and its grape-covered courtyards.

Turpan today is a nice little Uygur town, with a range of touristic spots around. To see it all we rented a Miandi, a Chinese version of a mini-bus, real mini, with a friendly, English and Japanese speaking Uygur driver. 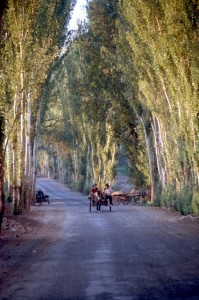 road in the outskirts of Turpan

The law in China says that cars need to alert bicycles if they come close, but it does not actually specify what is considered close, and what not. So every car will immediately blow its horn upon spotting a bicycle, upon expecting to spot a bicycle, or just to make sure. There are a lot of bicycles in China, and probably the law specifies the same for donkey carts, pedestrians and loose cattle. On two other occasions horns are also blown. One is before, during and after overtaking another car, bicycle, donkey cart, pedestrian, or loose cattle, and the other is upon approaching a junction, which usually goes together with pushing down the accelerator, because the one first on the junction has right of way (although this is most likely more an unwritten law). Bottom line is that the average driver will more often than not have his hand on the horn. Needles to say that with so much noise around nobody is really paying attention, and the ones to which the noise is targeted generally remain oblivious of this fact until the last moment. Our friendly driver tried to catch the attention of a man who had just got off a bus, in the middle of a junction, and had his head stubbornly turned away from us. He literally walked against our car, which by that time had stopped all motions, except that of its horn. 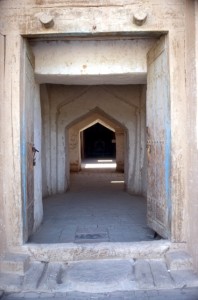 the mosque next to the Emin minaret in Turpan 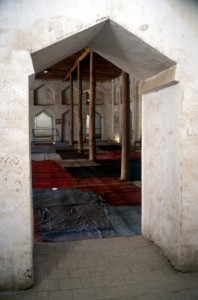 inside of the mosque, richly covered with carpets 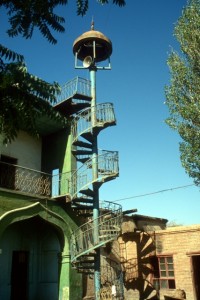 The mosques in Turpan, like the ones we would encounter further on our way to Kashgar, have shed their Chinese characteristics, and look much more Arabic. Many are new, very new, a sign perhaps of the increasing relaxation towards not only minority groups in China, but also religion. The exception is the very simple and basic Emin minaret and mosque, a lovely place just outside town, which is a few hundred years old and of Afghan origin.

Transport in town is well organised, and is based on mini bus routes that radiate from the central square. The mini busses are actually not more than a Miandi pick-up, with two benches in the back and a cover of cloth, or, the upmarket ones, carpet. You just flag one down and pay a standard fee when you get off, no matter whether this is after three minutes or after half an hour. To indicate where you wish to get off you knock on the window, and you hold tight with your other hand, because the driver will stop immediately. 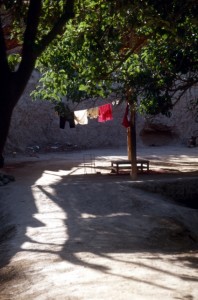 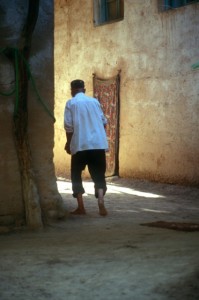 man disappearing behind his house

Turpan’s scenery, and that of the surrounding area, is dominated by grapes, which provides shadow in the streets and in the courtyards, where the people live. Peeping into these courtyards is an ever enjoyable business, each being different, but most being kept spotless, with blooming flowers, laundry drying, food strung up high against creeping animals, and beds outside to bring some relief at night against the summer heat for which Turpan is notorious. Cycling, especially at the end of the day, when everybody returns from the fields, is the best way to explore Turpan’s outskirts. Outside the centre, you’ll find yourself soon riding on dusty dirt tracks only, in thin traffic dominated by donkey carts, and without cars. 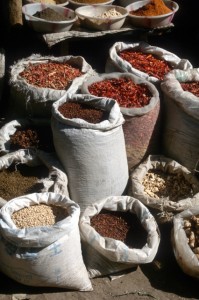 chilies in the Turpan market 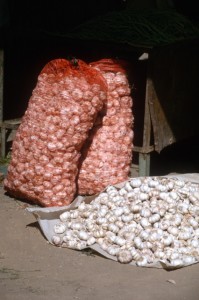 garlic in the Turpan market 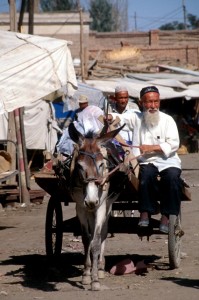 man and his donkey-drawn cart 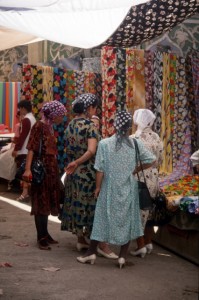 Continue: To Korla and Kuqa