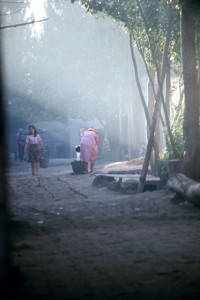 The first leg of the journey to Kashgar: more about bus travel and Chinese road discipline.

From Urumchi one has several options for travel to Kashgar. Easiest is, of course, to take a plane, but that did not suit our plans. After all, we had come to see this part of the world, and which better way, if not necessarily comfortable, is there than overland. There are direct buses between Urumchi and Kashgar, which travel day and night and take some 30 to 36 hours, if one is lucky. However, 60 hours on this trip is also not uncommon. Having a dislike for night travel, especially in China, we opted for the slow way, stopping off in towns in between, and we found sufficient evidence during the days to come that that had been a good decision. We came across two trucks still burning after a head-on collision, and we spotted at least two of the overnight buses overturned at the side of the road, all the luggage spread around. The main road, indeed the only road, to Kashgar is in parts just a dirt track, corrugated from the heavy traffic, and in other parts the tarmac left is rutted and pot holed. Occasionally traffic is led off the road, through the desert, where the numerous tracks that have developed encourage the truck and bus drivers to use this opportunity to overtake each other at neck-breaking speeds. Many bridges are non-existent, and although there is usually not a lot of water in the streams, the d-tours, off the road, through the river and back onto the tarmac, significantly slow down progress. They are often accompanied by major traffic jams, as Chinese, normally known in the west for their patience, have a distinctly different attitude once behind a steering wheel. Another problem is road repairs, which do not seem to be co-ordinated. Often, one would see a single bulldozer working at one stretch of road, which had been torn up, and then one would have as little as 500 m tarmac, before another crew, consisting of perhaps twenty people with spades, is working on another, apparently non-related, repair job. Again Chinese road discipline is not very helpful here, and in many places undergoing road works, or simply awaiting road works, traffic would pile up on one side, often overtaking each other first on the left-hand lane for oncoming traffic, and when that filled up, along tracks both on the right and the left side of the road. Of course, somewhere ahead would be the bottle neck, through which everybody had to pass single file, so the whole pile-up takes the shape of a huge funnel. Unfortunately, on the other side of the bottle neck a similar funnel would have developed, in mirror image. 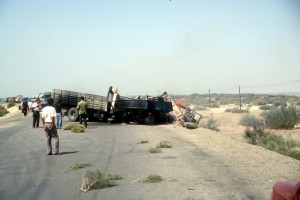 burning trucks on the road to Kashgar

The first part of our overland travel to Kashgar was to bring us to Turpan, approximately four hours from Urumchi, in a luxury touring car. It even had a big no-smoking sign at the front, a detail lost on most of the audience, and collectively ignored. Within five minutes from departure somebody produced a deck of cards, and in the next hour we witnessed the Chinese passion for gambling, non-scrupulously exploited by a gang of five card cheaters. It all started innocent enough, the five, at first apparently unrelated, playing each other, and winning and losing a bit. Then they started to engage others, and the winning became one-sided, to the extent that occasional fighting broke out. Two peasant women were left in tears, having lost all they carried with them, perhaps the proceeds of their farm produce sold in the Urumchi market. It is one of these things you have read about in the old Wild West stories, but never seen in real life. After an hour, or so, at a rest stop, the gang left, only the tar and feathers were absent.

The bus crossed the snow-capped Tianshan mountain range, the one we had admired from the plane when arriving in Urumchi, and then descended into the Taklamakan Desert. The small settlements it passed on the way also had this Wild West image over them, usually they consisted of not more than a single long street with houses, shops and restaurants along both sides, dusty, sleepy, without a sign of life. The only proof of human activity came from the enormous amounts of rubbish in the desert just outside the villages, plastic bottles, tins and broken glass nearby, and plastic bags and paper blown further away. 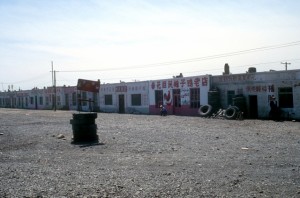 wild west town on the way to Turpan 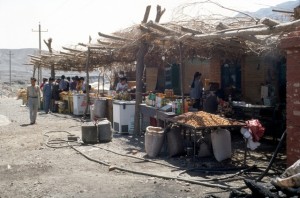