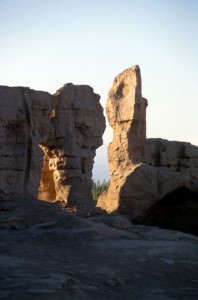 There are many ancient ruins of buried desert cities around Turpan, as well as Buddhist caves, but little is left after early 20th century archaeological exploration removed most of the frescoes. 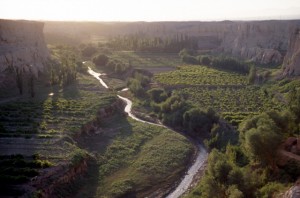 river valley in between the dry mountains

All around the Taklamakan desert, and even right in the middle of it, existed oases, that played an important role from the 3rd to 10th century in facilitating the trade along the Silk Route. Some of these town were just garrison towns, established to house the Chinese army which tried to protect the Silk Road, others were individual kingdoms with varying degrees of autonomy. Many were home to large Buddhist monasteries. With the rivers feeding these town drying up, and trade along the Silk Road diminishing, many of these town were abandoned, and ultimately buried under the desert sand. 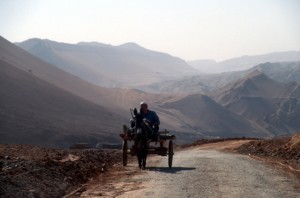 donkey-drawn cart in the desert

The area around Turpan was particularly important, and populated, and thus provided a  rich exploration area in the beginning of the 20th century. It was also the self-allocated territory of several German expeditions between 1902 and 1914, initially led by Albert Grunwedel and later by Albert Von Le Coq. The Germans traveled to Turkestan via Russia, by train, steamer and then on horseback. 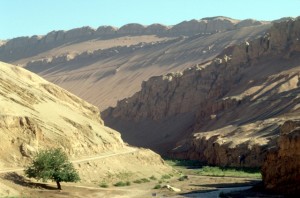 Especially the second expedition yielded rich treasures, from the buried desert town of Karakhoja, and from the Bezelik caves. Apart from manuscripts, frescoes were sought after by the explorers, and whole cave walls full of paintings were carried off, after having been carefully removed. The technique to remove paintings began with carefully cutting around the painting with a sharp knife, to penetrate the layer of clay, camel dung, straw and stucco that served as the painting surface. Then a hole had to be made between surface and rock wall, to allow entry of a saw behind the painting, to painstakingly detach the surface. Often, if the surface was in poor condition, workers pressed wooden boards covered with felt against them, to prevent them from crumbling. Once cut loose, the slabs were carefully packed in wooden crates, with plenty of padding in between, and taken to the respective museums around the world, in this case Berlin. 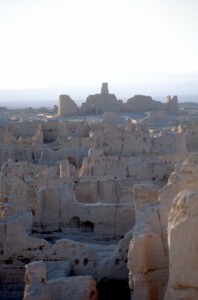 The Germans could have struck it even richer had Von Le Coq followed up on the rumours of a large cache of manuscripts in Dunhuang…, he would have beaten Stein by well over a year. However, much to his chagrin, he had been summoned to Kashgar to await the arrival of Grunwedel, his superior, who was to join the expedition, and who then directed the activities towards the Kuqa region, much further west. 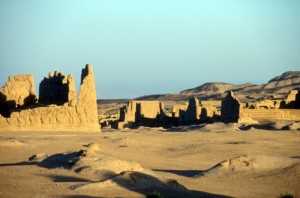 another view of Jiaohe

The most accessible desert towns today around Turpan include the two abandoned cities of Jiaohe and Gaocheng. Jiaohe, an old garrison town at the confluence of two rivers, we visited at half past nine in the evening, and the sun was rapidly setting over the city, leaving long shadows. Xinjiang is on Beijing time, but because it is so far west, evenings come late. All other visitors had left already and we wandered around the ruins of palaces, temples houses, squares, in isolation, a tremendous experience. Gaocheng is much bigger, but less attractive, and from the Bezilik caves little remains, except the holes in the rock. Sculptures and frescos are badly damaged, and most of the grottoes are closed to the public anyhow. 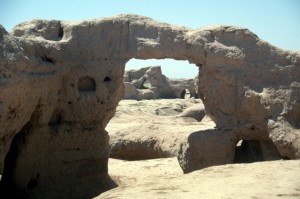 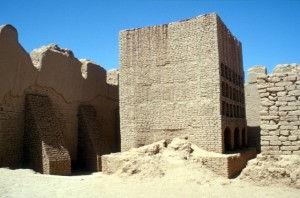