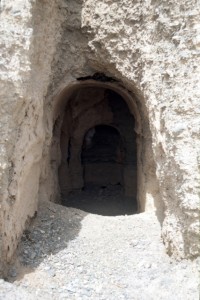 The story of the famous manuscript forgeries.

Hotan, also referred to as Khotan, was one of the towns where the 20th century exploration began, partly because the first explorers came across the mountains from India, and Khotan was the first of the Taklamakan oases on their way backtracking the Silk Road. A second reason for initial interest in Khotan, however, was that from here originated several early manuscripts that had been purchased by early British travellers, as well as Russians, including their respective consuls in Kashgar.

Soon after the Kuqa manuscript, the one described earlier, reached Dr Hoernle in Calcutta in 1890, more texts started so surface, allegedly from sites around Khotan. The principle supplier was one Islam Akhun, a local treasure hunter who claimed to have found several places – houses buried in the sand, graveyards, perished caravans – where he encountered the manuscripts, all perfectly preserved in the dry desert climate of the Taklamakan. Small problem was that nobody recognised the characters in which the texts had been written, but this happened more often, ancient unknown languages surfaced all the time. Many of the Islam Akhun finds ended up with Hoernle, who spent a lifetime studying them. The fact that the locations of the sites where the manuscripts were reportedly found were often nowhere near known sites was explained by the observation that the ‘natives of Turkestan are very untrustworthy in their estimates of distances’. When a local servant of one of the Western explorers warned that the documents ‘were not as old as they pretended to be’, this was waved away by suggesting jealousy on the part of the servant. It was also observed that the books had a ‘certain crispness and freshness and bore none of the signs of wear and tear’. The paper was even ‘exactly of the same kind as prepared in Khotan in the present day’. In fact, Hoernle contemplates himself that ‘considering the abundance of block-prints and the mystery of their scripts, it is not surprising that the suggestion of forgery should present itself’. He then goes on, in his scientific publication on the manuscripts, to explain away all these signs, and to declare the finds true and original.

Of course, Islam Akhun was a forger, who invented the script, and produced the prints in his backyard. The first manuscripts were in fact hand-written, painstakingly trying to copy old Brahmin characters, but when the manuscripts proved so popular, Akhun and a friend (who sold the same texts to the Russians) resorted to block printing. Soon, many different scripts emerged, all total fantasy; and all fully described and illustrated in Hoernle’s report. Years later, after several occasions where Akhun was conveniently absent whenever Stein visited Khotan, the latter finally unmasked the former as a forger. But what a forger he was, in an environment where nobody wanted to accept the undeniable.