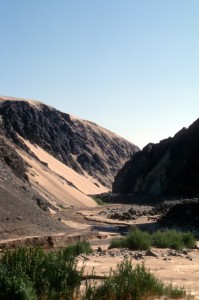 countryside on the way to Korla

To a disappointing lake, a modern Chinese oil town and on to Kuqa, with plenty of entrepreneurship again.

The road to Korla, especially the mountain crossings, is beautiful, but ultimately becomes monotonous. Progress was slow, traffic was heavy, and in places the road was in bad condition And the much heralded Bosten Lake, expected to be the highlight of this stretch, was outright disappointing. After a much longer detour than expected we arrived at the shores of this lake, situated in the middle of the desert. Water runs up to the sand, without a belt of lush green vegetation, but there is actually not much to it. Yet, as everywhere in China where people go, the lake side had been designated a tourist area, and some restaurants and jetties had been constructed. A row of motorboats could be rented at exorbitant prices, for a five minute tour on the lake, a tour of nothing. And sure enough, somebody turned up with entry tickets. 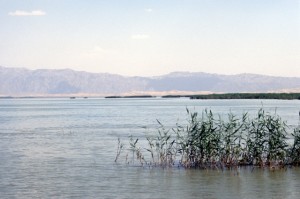 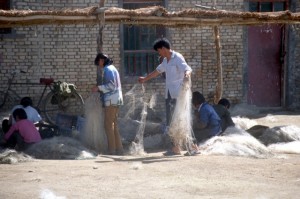 fishing nets on the lake shore

Korla is a new town, at least the part we saw. It is dominated by the Chinese petroleum industry, which has made the town their centre for operations in the Taklamakan Desert. Consequently, where in other towns the collection of cars one sees on the street is a mixed bag of older and newer, locally made vehicles, in Korla every third car is a Toyota Landcruiser. The oil industry is rich, and can afford to import.

As we were keen to arrive in Kuqa, our next stop, before Friday market day, we did not linger around in Korla, and took the Kuqa bus the next morning. The receptionist in our hotel had checked with the bus station, and the next luxury coach – everything is relative – would leave at ten. When we arrived at the bus station, a save 45 minutes before departure, one of the staff behind the ticket sales counter actually got from behind the counter, a highly unusual service in China, to show us to the bus. A bit disappointing, the bus turned out to be small, and already fully packed with the usual, people, bags, carton boxes and the like. No luxury coach, this time. We put our luggage on the roof, and found ourselves, with some difficulty, two cramped seats, braising for a slow and rough ride again. However, as we were not to leave for another 20 minutes, I got out again for a last opportunity to stretch the legs. The bus was parked outside the bus station proper, so I walked inside the station compound, just to see a whole range of large, luxury coaches. And sure enough there was a bus scheduled to leave for Kuqa, at ten! Still almost empty, though, and no wonder, if the bus station staff is directing all potential customers to their family business outside, instead of to the official buses  When I got back to our small bus, it was just about to leave, and the driver was clearly annoyed that he had to wait for me. He got even more annoyed when we demanded, and got, our money back, disembarked, and got our luggage off the roof again. Our trip to Kuqa, in the luxury coach, must have been many times more comfortable than in the alternative, with space to spare. The driver actually dropped us in front of the town hotel, in Kuqa, some eight hours later. This being China, he briefly tried to charge us for our luggage, but when we just laughed at him and told him that that had never happened to us before, he laughed back, gave us a pad on the shoulder and left. It was worth trying, I suppose. Slightly disheartening was the fact that four policemen, who had boarded the bus just minutes before we got off, were hanging out of the window participating in the discussion, entirely on the side of the bus driver. The message is that if you ever have an argument with a Chinese in China, don’t count on the police.