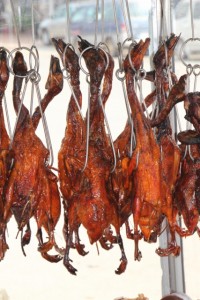 A dusty town without real historical interest, but with Cambodia’s only winery and only Bamboo Train!

Why would anybody come to Battambang, a pretty long and boring 8 hour bus drive from Phnom Penh? There must be a reason, because the town is full of hotels, the 2-3 star variety frequented by downgraded business travelers as well as upgraded backpackers affording themselves a night of relative luxury. The town, the only one I know that numbers streets in halves (indeed, street 1, street 1.5, street 2, street 2.5 etc.), is pretty run-down, dusty, without really interesting places, or it must be the small snack stall along the river front, which sells all sorts of fried snakes, roasted crickets, scorpions, frogs – you name something unappetising and they have it. 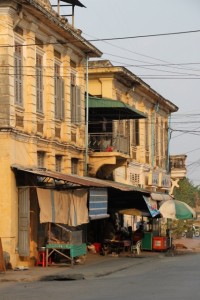 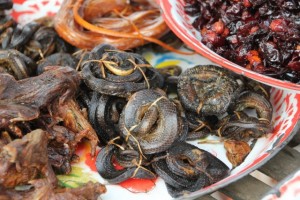 Outside town there are a few temples (a.o. Wat Banan, reminiscent of Wat Phu in Southern Laos), and there is the only vineyard in Cambodia – imagine! Thanks to the climate, they have no less than three harvests a year, but it hasn’t helped improve the quality from this rather poor red, or rose. For as long as it lasts, there are also the Bamboo Trains, lightweight bamboo platforms attached to two axles  with four wheels, and propelled by a 6 HP engine, a flywheel and a rubber belt, the simplest of mechanics. They travel up and down a 12 km track, for no other reason than providing an exhilarating experience. To overcome the obvious limitation of a single track, the convention is that if two trains meet, the one with the lightest freight is quickly disassembled and taken off the rails, to allow the heavier one to proceed. However, there are plans to upgrade the railway, and start a real train service again, which would be the death of the Bamboo Train. 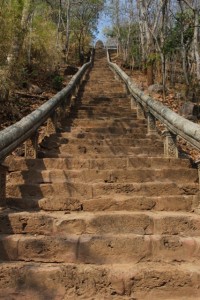 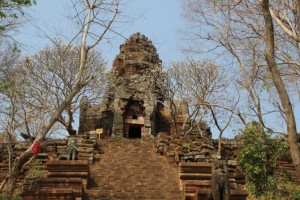 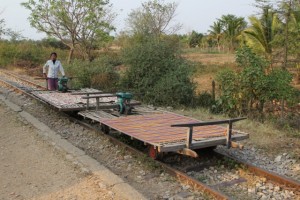 Two bamboo trains at the end of the Battambang Railway

The real reason to come to Battambang is to take the ferry to Seam Reap (the town close to Angkor Wat). Of course one can fly to Seam Reap, but there is no better way than travelling by ferry, even though it takes anything between 7 and 10 hours, slow boat past numerous floating villages and through the Prek Toal nature reserve.