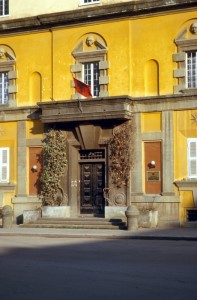 In the mid-1990’s the Albanian capital was a pleasant, rather quiet town, with a somewhat provincial atmosphere, except that small-time business was booming uncontrollably. Parks and pavements were crowded with the ubiquitous bar-bufets and the euphemistically called general stores.

With the sudden opening-up of Albania lots of foreign business people flocked to the country to try to get their hands on real or imagined opportunities. The infrastructure for such invasion was long non-existent, with the only half-decent hotel being the Hotel Tirana, in the city centre, soon to be followed by the Rogner Hotel, of Austrian origin. Stories aplenty of visitors with confirmed bookings who had to share rooms with one or more total strangers, simply because there was not enough accommodation.

The centre of town is Skanderbeg Square, with its museums and theatre, and the main boulevard leading south from here, lined with fairly attractive turn-of-the-century  government buildings. And with the Enver Hoxha Mausoleum, an Albanian modern architectural monster in the shape of a pyramid that was, at the time, mostly used by children to slide down its sides – the Hoxha paraphernalia had been removed by then. 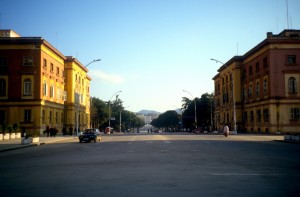 Avenue of the Martyrs, the main boulevard in Tirana 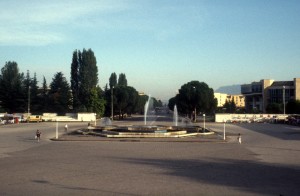 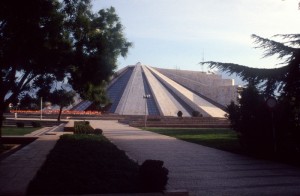 In the mid 1990s there were still relatively few cars in the country, and people were not used to them; like so many other Mediterranean people, towards the end of the afternoon or early evening the Albanian likes to walk up and down the main avenues, to see and to be seen. This habit frequently clashed, often literally, with those who had managed to obtain a car – an almost brand-new Mercedes, the car of choice, which went for around US$ 3000-5000 on the car market of nearby Durres -, and who needed not only to show off their car, but also their driving skills, copied from Western television series like Starsky and Hutch. 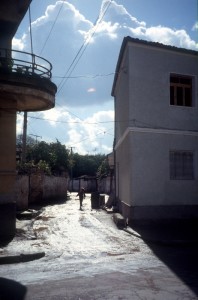 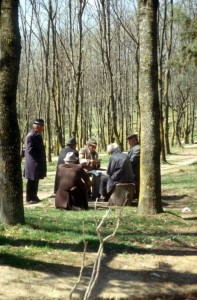 Along the same boulevards and avenues is that other key characteristic of Albania, the general store, often no more than a wooden container where the shop keeper sells anything he or she managed to get hold of, mostly food stuff. You could get quite a lot in Tirana, in those days, but it wasn’t always clear where. One day one of the shops would have new stock, another day somewhere else other stuff appeared, but there was no regularity in supplies. And after a while we all had the strong feeling that quite a lot of the merchandise had ‘fallen of a truck’, or even likelier, had been smuggled from Italy on the fast speed boats that trafficked people into Europe (another Albanian issue I’ll get back to later). One shop sold smoked salmon, and we encouraged our network to go and buy it, so that the shop keeper would replenish his stock – until we came to the bottom of that same stock and noticed fire damage at the edges of the remaining packets of salmon: this was not normal merchandise, but a load he had managed to get for very little money, because it had been rejected after a store fire somewhere else. Yet, with time on your hands, and the necessary patience, life was not bad at all, in those days, and all sorts of Italian delicacies would be available for those who persevere. 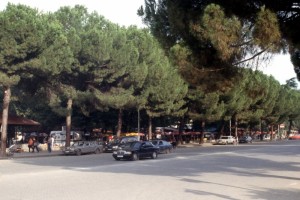 quintessential Tirana: bar-bufets along the pavement, and Mercedeses on the road

The second Albanian key-characteristic was the bar-bufet, which also had been erected along the pavements, or better, in every possible park. These vary from portacabin-like sheds to fancy-looking structures with dark glass windows and formica tables and chairs. What they have in common is that they all serve drinks and coffee, but that their coffee machine in usually out of order, and their drinks warm – because they have no fridge, a broken fridge or no electricity. Needless to say that there is very little planning involved, everybody can just erect whatever structure they want anywhere as long as they have the title to the land, or in the case of a Tirana pavement, as long as they pay the right person the right ‘fee’ – current rate was around US$ 3000 at the time, which was small enough to ensure that all pavements and all public parks were covered with bar-bufets. The business model was somewhat unclear. Although Albanians like terraces, it is an important part of their culture, they haven’t got a lot of money to spare; and even more problematic, because there are so many of these bar-bufets, the clientele is almost exclusively made up of cousins, nephews and uncles of the owner, and you cannot possibly charge your own family!

The concept of successful small business had not yet penetrated Albania fully. But the consequences of unbridled growth were visible all around Tirana. 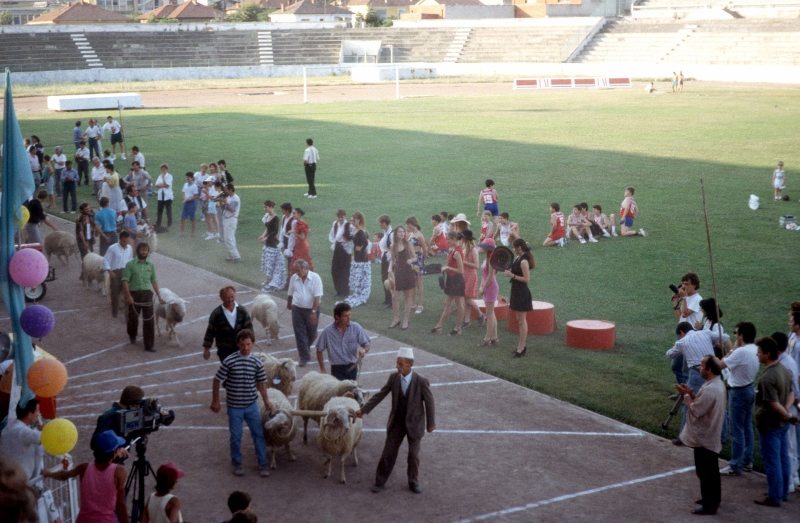 sheep constest in the Tirana stadium