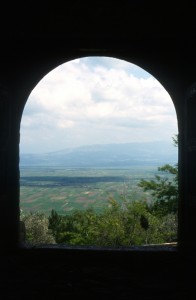 view from the bell tower of the Ardenice Monastery

About half an hour outside Fier, Albania’s oil capital, is Ardenice, an Orthodox monastery that in the first year of our stay in Albania served as a hotel. A beautiful place, and comfortable hotel, for as long as it lasted: at one point the building was returned to the church, as it should be.

The monastery is located on a hill, overlooking the coastal plains – and, with binoculars, the Patos-Marinza oil field. Much of the building is 18th Century, but apparently some parts of the church date back to the beginning of the 13th Century. From its hotel days I remember that it could get very cold, up here. In the absence of any heating, rooms were equipped with sheepskin duvets, of which several on top of each other did the trick in winter. Its passable restaurant introduced me to the national cognac, called Skanderbeg, which was a rather sweet, caramelised affair – just in case you didn’t have enough sheepskins. 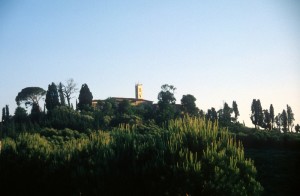 the Ardenice Monastery, on the hill 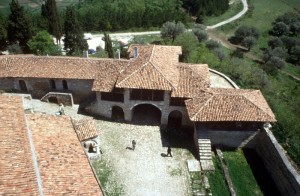 view of the courtyard, from the bell tower 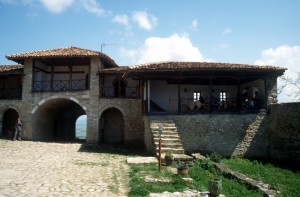 the monastery’s entrance gate, from inside 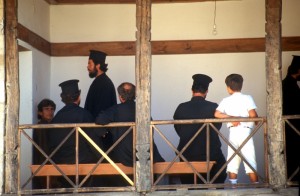 even in its hotel days, the monks were never far away