the trip to Tropoja 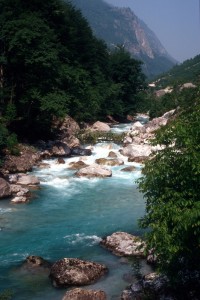 the Valbona river, in the Tropoja region

One of the most beautiful areas of Albania is Tropoja, in the north-east of the country along the borders of Montenegro and Kosovo. However, at the time this was also the wildest area of the country, with bandits and blood feud, an area where you want to be accompanied by a local.

What happened was that I told a colleague of mine, who was from the area, that we were planning to visit Tropoja next weekend, at which he looked at me in horror, and then explained that he could not possibly come with me, that weekend. When I said that, relax, I had been travelling the world before, and this could not possibly be that different, he explained that “I didn’t understand”, begged me to postpone my trip, and insisted that he would have to accompany me. So we postponed the trip, to three weeks later: never ignore the advice of the locals.

The issue, I learned later, was that if I would be with my colleague, a local, I would automatically become part of his clan. If anything would happen to me, orchestrated by another clan, for instance, his clan would have to take revenge, which made it a lot less likely that anything would happen to me, not worth it. But if I would be on my own, well, then it is a free for all, really, and it is just a matter of which clan has discovered this hapless tourist first, and claim the right to rob him of everything he carries with him. Hmmm. 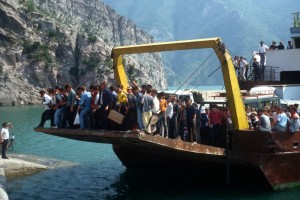 arrival of the ferry

So three weeks later we took off, first to a place called Koman, from where a ferry crosses one of the many artificial lakes in the Drin River, to Baram Curri. The north of Albania generated vast amounts of hydropower, in those days, from no less than seven hydro-electric dams, more than Tirana could possibly consume – yet, Tirana had lost of power cuts, because the problem was in the distribution. To get to the ferry was already an experience. The bulk of the space on the boat is taken up by lorries, some 15-20 of them, which had to wait at the foot of the mountain until the ferry had arrived and was offloaded. A narrow and winding road leads up the mountain, and through a narrow and winding tunnel, to a loading platform just behind the dam. After some arguing, we, in our private car, were allowed to go up to the platform before the ferry had actually docked, so we could witness the arrival of the ferry. You have never seen anything like this. First, just before arrival, all the rubbish, tins, plastic, chicken bones, paper waste etc., is thrown overboard, in the lake. In the meantime, hundreds of people scramble to the big loading door, and even before the ferry has landed, people are jumping out, screaming to the many minibus-drivers for directions and prices. In a matter of minutes, it was all over, and the minibuses were on their way, down the tunnel. Then the offloading of the trucks began, all of them in a hurry and trying to get out first, to be the first to descent the mountain. Complete chaos. The loading was slightly more organised, the trucks appearing one by one, but they still had to negotiate the flocks of sheep that had already found their place on the boat. 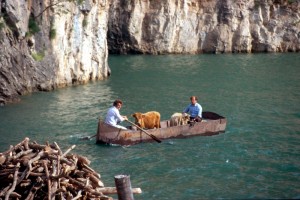 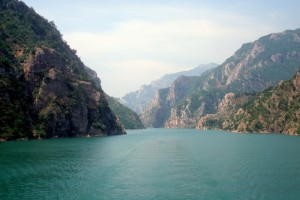 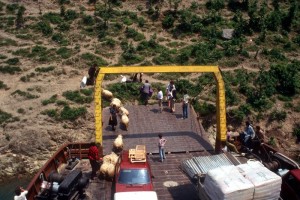 The ferry ride itself was magnificent, a three hour trip in between steep mountain walls, across a deep turquoise lake. Somewhere halfway, the ferry suddenly slowed down, and steered towards the lakeshore, without any proper landing point apparent. Sure enough, this is where the sheep had to get off! The landing door came down, one sheep was pulled off the boat, and indeed, all the other followed. 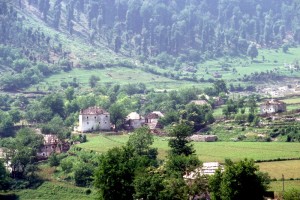 impressive houses in the Valbona valley

Tropoja didn’t disappoint. We based ourselves in Baram Curri, and explored the region, often with some of the members of my colleague’s extended family. Beautiful scenery, snow-capped mountains, even in June (!), extensive forests on the slopes, and idyllic rivers wriggling their way down. However, these forested slopes were quickly disappearing; everywhere were traces of illegal logging activities, entire slopes had already been cut down, first the easier parts near the roads, but the higher parts will no doubt have gone, too, by now. Seemingly uncontrolled. And so easy to stop, because of the limited access to this area. If you would want to. 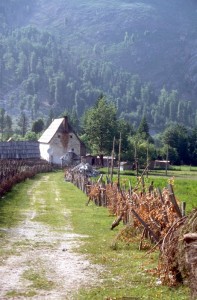 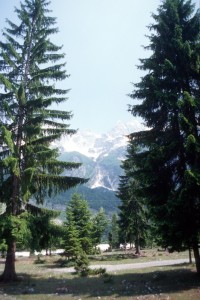 the picnic site; we were not the first ones… the lam is ready

Highlight of the trip was a barbecue organised along the Valbona River, perhaps the pretties of river valleys in Tropoja. Some fifteen men, uncles and cousins,  – only men – busied themselves drinking lots of beer and roasting a full lam, whilst two nieces had been mobilised to serve the food, salads that had been prepared in advance. Obviously, they had done this before, and men and nieces were running a smooth operation.

That they had done this before, and others too – this was a popular place with the local people – was also clear from the rubbish that had been left. Empty bottles, tins, nothing gets cleaned up. We were obviously considered lunatics when we started to put at least our own rubbish in a plastic bag. And we were, because back in Baram Curri, there was no place to leave the bag, either. 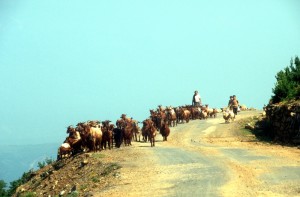 goats on the road

I wonder how Tropoja looks now, 20 years later. Or the whole of Albania, for that matter. Living and travelling will have become a lot easier, no doubt. But some of the charms of this country, then pretty wild, will have been lost. And how much of the short-terminist, self-destructing attitude then pervasive in Albanian society, has survived? How much of authentic Albania has survived?

2 Responses to the trip to Tropoja