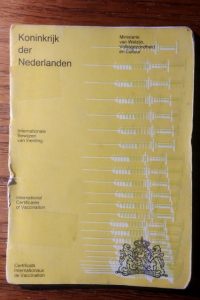 We have made an appointment at the Travel Clinic, to get up to date on health issues in West Africa. We know about compulsory Yellow Fever vaccinations, we already needed to proof this for our visas, but how about malaria and other tropical diseases? Not to mention Ebola, a potentially deadly virus endemic to West Africa, and competing with kidnapping as the main risk during our trip. And monkeypox, another one originating from the same place? 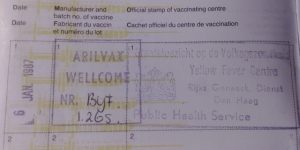 and evidence from my first yellow fever vaccination, from 1987!!

Two charming young ladies check if we have all the relevant vaccinations – we do, just one needs to be updated. ‘Relevant’ is Yellow Fever, Rabies, Hepatitis A & B, DTP, you name it and it is relevant. Well, not exactly, in fact, we even have a few vaccinations, still valid, that we do NOT need for West Africa. Malaria is indeed a problem, and the option to just bring some medicine to use if we get it, is clearly not an option anymore, or at least not in West Africa. We are offered the choice between daily pills and weekly ones, all with a different range of side effects; we choose the daily ones, which we have had before. They didn’t bother us then, shouldn’t bother us now. Well, except that they cost us an arm and a leg. Oh, and insect repellent, and mosquito nets, but we have all that. 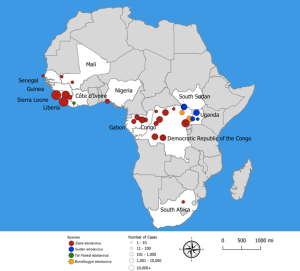 ebola occurences in the past 50 years, or so

Ebola? There is really no information on this in the Travel Clinic, it is so rare that travellers aren’t usually exposed to it. Does that reassure me? A bit, I suppose: if these people – professionals – aren’t worried, why should I? I do look up some internet sources, and find that it is thought to come from infected animals, probably fruit bats, who spread the virus through their excrement, which chimpanzees, gorillas and antelopes and the like, who, slaughtered and eaten, then infect humans. The Ebola Viral Disease (EVD), as it is officially called, was first identified in what is now the DR of Congo, near the Ebola River. With disastrous results, because its contagious nature was woefully underestimated at the time, nurses still using a perhaps five syringes on 300-600 patients a day. Other areas where it occurred were South Sudan, and indeed West Africa. By the time Ebola arrived in Cote d’ Ivoire, in 1994, it was well understood that protective equipment and disposable needles were key in containing the outbreak. Most occurrence in the 21st Century is still in DR of Congo, the last major outbreak in West Africa dating from 2014-2015, spreading in Liberia, Sierra Leone and Guinea. Transmission was then mostly between close relatives of the virus victims, through direct contact with the victim’s body during mourning and burial ceremonies, and controlling the epidemic hinged on achieving behavioural changes in the affected villages, ultimately a successful approach. Let’s hope that people still remember. And let’s avoid chimps and other bush meat, especially if it is raw. 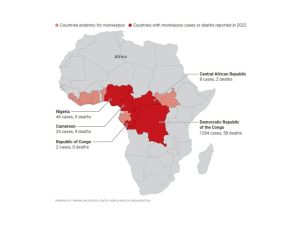 the countries where monkey pox is endemic, and in red the casualties from 2022.

Monkeypox? Same story really. It was first identified in 1958 in macaques, a monkey type which gave it its name, although in the meantime it has been generally accepted that especially rodents are virus carriers. The first documented human case was, like Ebola, also in DR of Congo, in 1970. It has since occurred in quite a few other African countries, many of which we are going to. It is spread through eating contaminated meat, and subsequently through close contact between people. The good news is that transmission is often limited, resulting in mostly isolated, individual cases – and unlike Ebola, where fatality rates are around 50%, fewer people actually die from Monkeypox (typically 3-6% of the infected; and none of those affected by recent outbreaks that spread to Europe and the US died). So, don’t eat rats, and don’t come too close to people.

All in all, the health risks seem manageable, then. That leaves kidnapping, but there is little you can take against that.