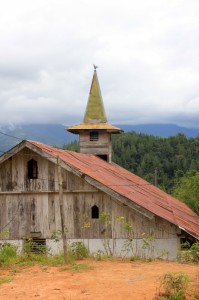 The Mamasa Valley combines scenery and authentic traditional architecture with a genuinely friendly and hospitable people, which more than makes up for the lack of facilities

The Mamasa Valley is often compared with Tana Toraja, one of the prime tourist attractions on Sulawesi, with its spectacular, tall traditional houses and an elaborate custom of ceremonies. And there are obvious similarities, both are rather inaccessible, mountainous areas with scattered villages that are characterized by traditional houses with saddle-shaped, overhanging roofs, and decorated with buffalo horns and ochre and brown painted wooden panels. 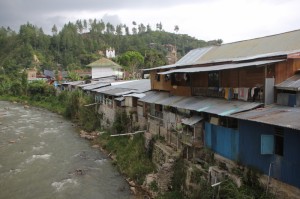 houses along the Sungai Mamasa – the Mamasa river

But where Tana Toraja has a well-developed tourist industry, with a transport and hotel infrastructure, a multitude of guides, and the associated indifference of most people, Mamasa hardly sees any tourists. Inside the local tourist office large notice boards proudly announce that in 2010 and 2011, each year some 150 Europeans, 20 Asians and 5 Americans have been visiting, in addition to around 500 Indonesians. Statistics for 2012 hadn’t been compiled yet (in November 2013), but are unlikely to differ much from earlier years. 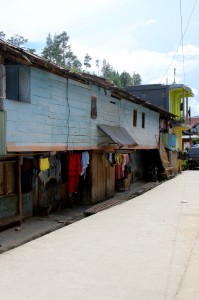 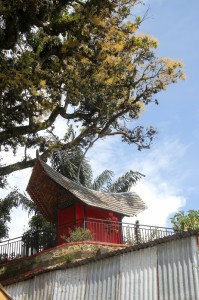 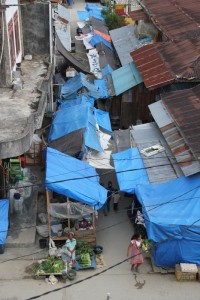 Mamasa market from above 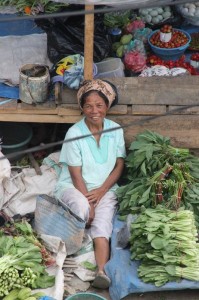 Mamasa’s lesser popularity is no doubt partly due to the fact that Mamasans seem to organize less ceremonies, and less ostentatious ones. The traditional houses look older, and perhaps less well maintained, and there are fewer of them. Also, its access road, from Polewali, which is in rather poor condition. Officially, this is the only road, although we did manage to find an alternative (see The Jeep), albeit not necessarily faster, better or more comfortable. The other problem is that accommodation in Mamasa is rather basic, too: a bit chicken-and-egg, really, few tourists means little investment in hotels, which means fewer tourists. But all this also ensures that the feeling one has walking the various tracks in the Mamasa Valley is one of authenticity, much more so than in Tana Toraja. One is welcomed everywhere by genuinely friendly people, with unconditional hospitality. 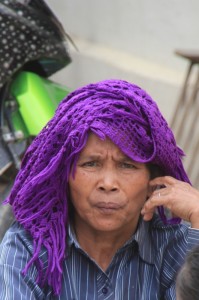 We spent three days in Mamasa, much too short a period to do justice to the area. Mamasa town, the focus of activity, has a rather small centre, with a market and a monument. Several churches dot the town, proof of a strong Christian establishment here.

But the thing to do in the Mamasa Valley, is to walk. There are not many roads, but numerous trails and tracks lead to villages, which are often situated on hill tops, a defense equally effective against enemies and flooding. The surroundings are spectacularly beautiful, with rice paddies in every valley floor, however tiny, and patches of forests in between, so walking is well worth the effort; even though away from the hill tops the area does get flooded, occasionally, and trails can get slippery. 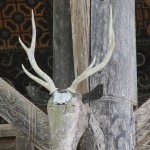 decorated front pole of a house in Taupe 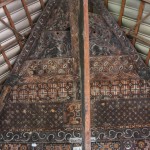 old, painted panels at the front of a house in Loko

One relatively easy day-walk from Mamasa town leads up to Taupe village, and then via Ne’ke to Loko, up in the mountains north-west of town. From Loko, with plenty old houses and a fabulous view over the neighbouring valley, another path leads back via Ponde Longi and Buntu Buda to Mamasa. Click on the picture or the link to see more photos of the specific village. 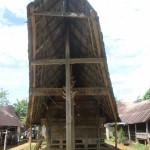 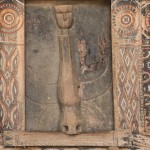 carved door of one of the houses in Tondok Bakaru

Another half-day takes you upstream along the north bank of the Sungai Mamasa in northeastern direction to Tuson, and further to Tondok Bakaru, and then on to Kole and the abandoned Mamasa Cottages hotel, where a bridge connects with the road back to Mamasa.

With a little more time, and effort, there are several other villages to explore south of Mamasa. No doubt all set in equally attractive countryside, and populated with equally hospitable people.