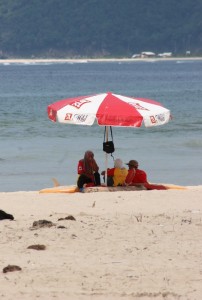 There is not much to do in Banda Aceh, apart from hitting a few golf balls on a curtailed driving range and walking fully dressed along the beach

The town of Banda Aceh is pretty quiet, there is not a whole lot to do. It may be the capital of the province of Aceh, and it may be the heart of the tsunami rehabilitation activities of the international aid community, but it remains a small town, with rather limited facilities.

I have mentioned the shopping, and the restaurants. Excellent sea food, in restaurants and from the market, huge king prawns, several different varieties of fresh tuna, you name it, they have it here. Less than five minutes from our house is a range of food stalls selling sates, gado gado (vegetables) and sticky rice, and I cannot think of a better take-away than this.

But there is little else in terms of entertainment, obviously: a devout Islamic society doesn’t sport cinemas, bars, nightclubs, and that is fair enough. Having said this, the Acehnese authorities are flexible enough to allow the concealed selling of alcohol in supermarkets, as well as the serving of alcohol in certain restaurants frequented by the foreigners. Whether this was tolerated thanks to the broad understanding of other culture’s needs, or out of gratitude towards the foreigners that came to Aceh to assist in the rehabilitation, or perhaps because the authorities had been paid off by the shop and restaurant owners, who knows. Fact is that, as long as parties were held inside the houses populated by the foreign aid agencies, and didn’t end up as complete drunken orgies extending to the gardens and swimming pools, they were also tolerated by the authorities, without the need for any pay off. (Sadly, not all foreign experts had the decency to stick to these rules, but that is another story.) Sharia law in Aceh was one thing, but foreigners were excepted, a sensibly-enough unwritten common understanding, which made life for the expat community quite bearable, indeed. By the way, something that did not necessarily counted for especially my female non-Acenese, Indonesian staff, many of whom were regularly harassed by the Sharia police for not covering their heads, even if they were Christians. Room for sports was also fairly limited. There were a few tennis courts, but they were often being used early morning and late afternoon – no flood lights -, and at other times is was simply too hot to play. The golf course, built years ago by the cement factory situated just to the south of Banda Aceh for their foreign employees, has not survived the tsunami – the nine holes have been washed away, and only a very short driving range remains! The army has its own new driving range – aptly called The White Elephant -, where one can hit a bucket with 50 balls for 10 US$ cents, but after a while, a short while in fact, this is also not very satisfying anymore. 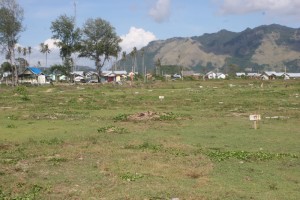 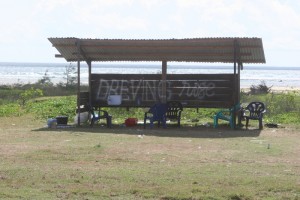 not sure whether the spelling mistakes are intentional; there is some protection from the sun

There is a beach out of town, fabulous strip of yellow sand bordering the turquoise Pacific Ocean. But to actually use it as we would, back home, in bathing suit jumping in the water, and then flat out drying ourselves on the beach, perhaps with a book or a magazine, or a cold beer from the beach bar or a cool box, no, that is not done in Aceh, doesn’t really fit in the Islamic culture. And even the few who decide not to respect the local culture, soon start to feel increasingly uncomfortable under the stares of the Acehnese, not only because they have never seen so much uncovered flesh, but more so because they are completely at a loss why one would, voluntarily, burn one’s skin, and if one side has been burnt, also voluntarily, turn around for the other. And they have a point if you put it that way, no? 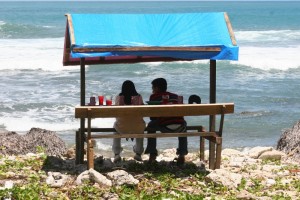 another expression of beach fun, this is where you go with your girl friend 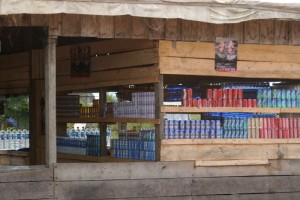 although not the most inviting, there is a beach club, too, even with (alcohol-free) beer for sale

For swimming one is therefore confined to private pools, for instance at some of the guest houses. Or to the pool of the only three-star hotel in town, the newly constructed Swiss Belair, which has, however, introduced separate swimming hours for men and for women. With the result that during the women’s hour, the lobby is packed with man staring outside, at the pool. Also not the most inviting option, for women at least. 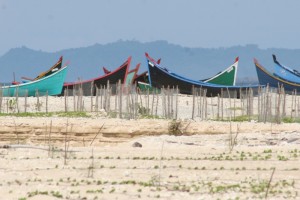 fishing boats on the beach 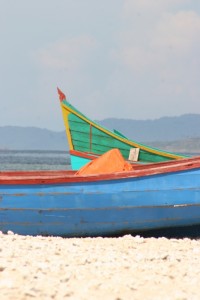 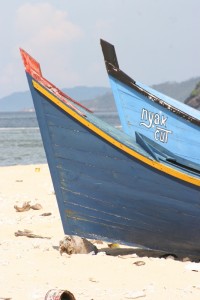 and even more, same reason

So most of our physical activity comes from walking, either in the mountains a little further outside town, or in the fields and past the rice paddies behind our house. And having a dog means that we do this at least three or four times a day. Obviously, the neighbourhood thinks we are completely nuts, walking a dog, on the leash. They have dogs, too, but these are outside dogs who will have to fend for themselves, and largely need to feed themselves, too. Yet, at one stage somebody had hidden two very young puppies just off the side of the road, and probably because I decided to take the two home, hid two more the next day. So now we are stuck with four pups, all four far too early weaned from their mother, totally dependent on us, and the protection from our dog, who has declared himself solidary with the pup rescue project. They are really ugly, and totally destructive, but good fun. We have embarked on a reintegration program – reintegration into the domain of street dogs, that is, after all that is where they came from – and we try to link them up with existing packs, but so far with mixed success. The neighbourhood stills thinks we are completely nuts, walking a dog, and now with four pubs trailing every time we go out. 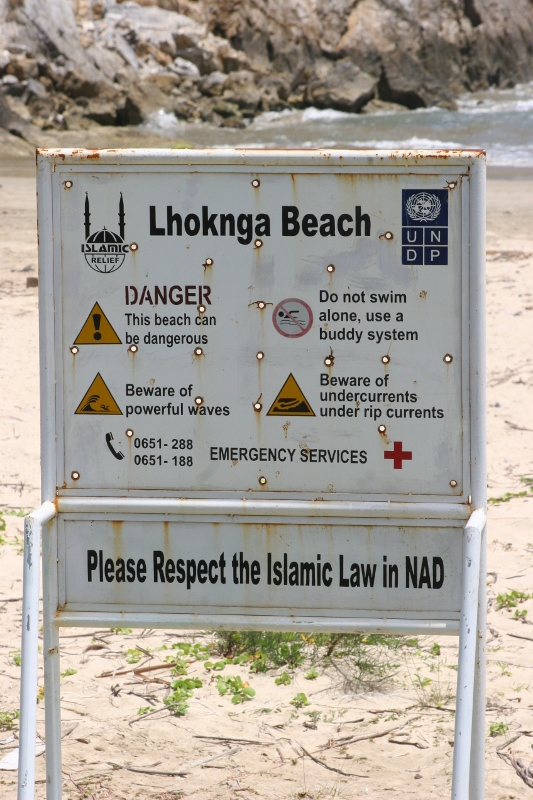 this sums up the Acehnese beach potential; note that the text is in English only, not in Bahasa Indonesia: meant for expat consumption