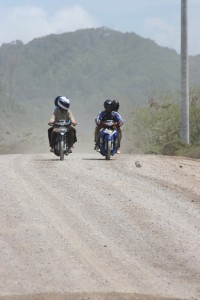 motorbikes on the coastal road

What a tsunami looks like, after almost two years

One of the easiest, yet most impressive, trips one can make from Banda Aceh, is to drive out of town in southern direction, along the coastal road to Meulaboh. There is no need to go all the way to Meulaboh, and in any case that would have taken well over 8 hours in the days we lived here, no, just half-an-hour is sufficient. This was the road that was completely wiped out by the tsunami, and the main reason why it took the best of two weeks to assess the damage and estimate total number of casualties. Nobody could reach the worst affected areas.

You can see the road on the satelite images, one from before and one from after the tsunami. By now, things have improved somewhat, of course, but there is still not much. The initial stretch of road passes several TLCs, temporary living quarters that consist of long barracks with individual rooms, often housing a family per room. Beyond the TLCs, the road follows the coast line, past pristine sandy beaches, the occasional palm trees, and so once in a while a number of colourful fishing boats, either moored offshore or pulled up onto the beach. 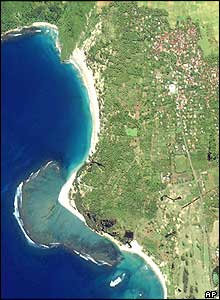 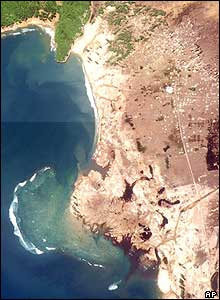 The only other feature in the landscape are the foundations. Nothing else, only the foundations of the houses that had been here before Boxing Day 2004, are left. In fact, there is not a single building in sight anymore, except for the TLCs. Everything, everything has been wiped out, washed away, literally razed to the ground. And if you then look a little further land inwards, you note the hills, in fact steep, almost vertical mountain sides that rise out of the coastal strip, some 100 to 500 m away from the coast. With a little imagination, you can also see what happened here, when the tsunami stuck. People running away from the water, but with no place to go; they were certainly not getting up those vertical mountain walls, impossible. They had no place to go. They all died. All of them. 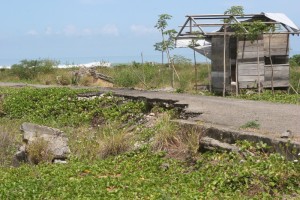 most of the road washed away 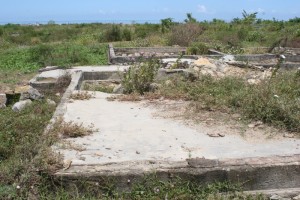 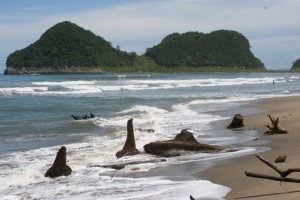 the beach, and the stumps of palm trees 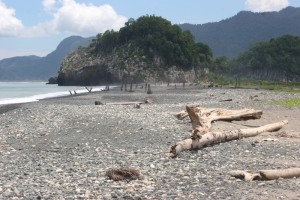 more beach, and note the steep mountains in the back

Everywhere in Aceh, and especially in Banda Aceh, there are visual reminders of the tsunami, almost two years afterwards. But there is no other place where one is confronted so directly with the absolute hopelessness of the victims, than on that coastal road to Meulaboh. And there is no need to go all the way… 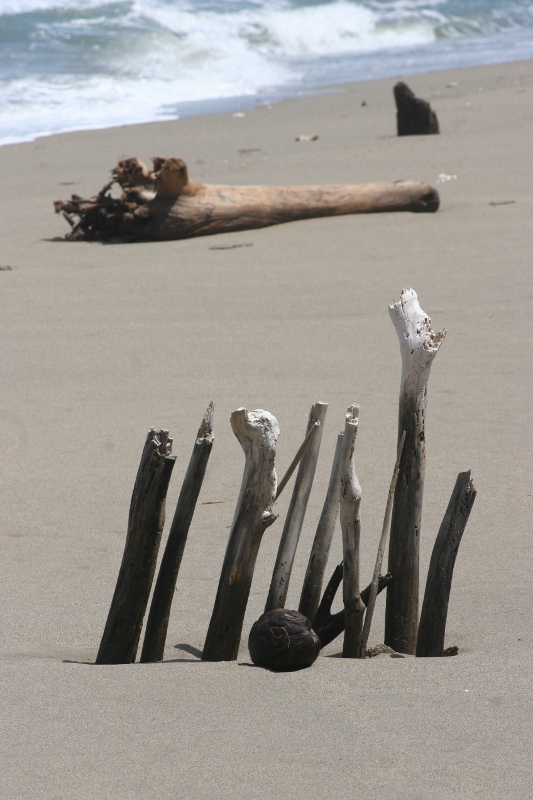