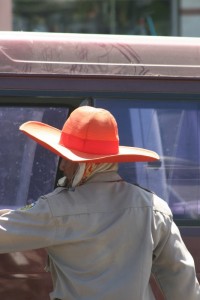 parking warden in the centre of Banda Aceh

A bit of a day-to-day description of Banda Aceh, and its dominant business in the time I was there

Traffic is dominated by motorbikes, even more so than in India. It seems that children grow up on the bikes, as 2 year olds they ride with their parents, it is indeed not unusual to see four people, daddy, mummy and two children, on a bike – without sidecar, just a two wheeler -, and by the time the kids are 8-9 years old they ride by themselves. The concept of minimum age is unknown, even if the law specifies such age, people are unaware of it. Then there are the becaks, motorbike with sidecar, the sidecar being an extra wheel with either a wooden plank, no more, or a proper seat installed, operating as taxis. Both bikes and becaks are the most heavily protected participants in traffic, not by helmets – although some do wear those, varying from plastic caps with a chin strap, usually hanging loose, to the most frightening black helmets covering the entire head and neck, with black reflecting plastic visor; especially women riders, having their heavy helmets on top of their head scarves, are a sight. No, they are protected by the two guiding traffic rules in Indonesia, rule 1 being that if a car hits a motorbike, the car is guilty, and rule 2 that if a motorbike hits a car, the car is also guilty. That, even with these rules, bike drivers could potentially be killed in the process, does not seem to be of concern to bikers, and they behave truly suicidal, oblivious of any other road users. For the rest traffic is in fact very relaxed, Banda Aceh is small enough not to have too much of traffic jams. Cars are a strange mixture of old vehicles somehow still moving, modern Toyota station wagons representing the newly acquired wealth of Acehnese business men, and the SUVs and four-wheel drives of aid agencies. outside the covered bazar 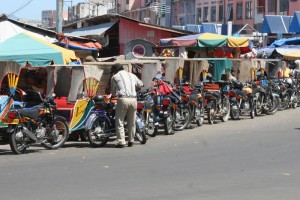 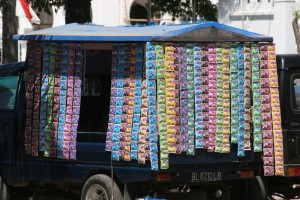 The dominant business, at least the visible business, is indeed the post-tsunami aid, every conceivable agency or NGO is here, and every one of them wants their logo displayed as prominently as possible. There is something like 5 billion US$ already committed to tsunami rehabilitation, with another 3 or 4 billion pledged, and nobody has ever seen so much money in their entire lives, here. Many agencies are blamed for being slow in spending, and for delivering poor quality. As for being slow, this is probably a function of not having the experience, eg almost everybody is building houses, yet most NGOs have never done this before, and certainly not on the scale that is required, and of massive opportunism – a euphemism for fraud – amongst the potential beneficiaries of those houses, village leaders taking money from people to get on a list who have never even lived anywhere close to the coast, let alone been affected by the tsunami, other people trying to get more than one house by getting themselves on more than one list, etc. In an Indonesian context, nobody thinks this is a bad thing, and if a village elder gets two houses, there will be no one in the village complaining, because they are all being paid off one way or another. But foreign agencies obviously do have a problem with this practice, if and when they need to report to donors. There is, in any event, enormous uncertainty about exactly how many houses need to be build; the official estimate of 130,000 seems very ambitious, given that so many people, entire families, died, and official criteria specify that you can only receive a house if you had one before the tsunami, you own land to build it on, and you have no other house elsewhere. 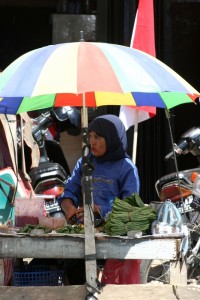 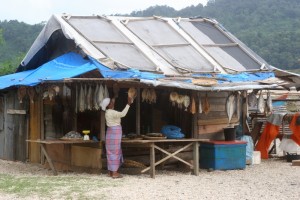 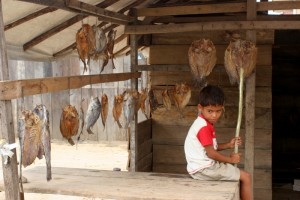 although not everybody is actively selling… and fair enough! 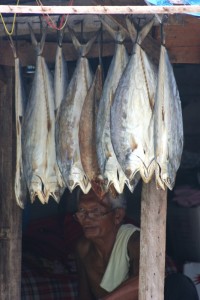 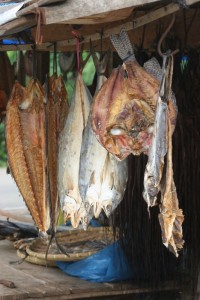 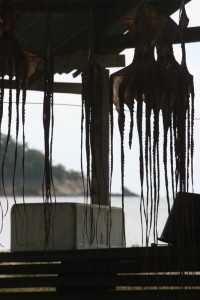 but inkfish is the most picturesque 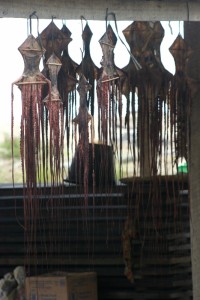 and there is no shortage of it

My own organisation still has funding to build close to 1000 houses, but we cannot find genuine beneficiaries anymore, yet in many villages people have been waiting for their house for up to a year, following promises from NGOs that have not yet been fulfilled. Many agencies went out to ‘claim’ whole areas, and signed up with tsunami victims, real or imagined, to build houses, last year, without yet having broken ground in construction. However, in some villages where, according to pre-tsunami Google Earth images, there were just 15-20 houses, now there are close to 100. There is no real oversight, poor coordination, even though there is a relatively capable Indonesian agency called the Bureau for Reconstruksi and Rehabilitasi which is trying hard; I think this whole exercise is just too complex to be managed properly – and with too many conflicting priorities, like pressure to ensure integrity, a time consuming process, against pressure to make progress quickly, and pressure to spend money. As for the poor quality, which has been measured out in the international press recently, most of the work is in fact quite OK, it is just a minority of houses that are substandard, mostly because of poor supervision, and building contractors taking short cuts – where in the world do building contractors not try to take short cuts? It is easy to find fault in such a massive operation, but as far as I am concerned, a lot has been achieved here already, given the enormous destruction of almost two years ago, the low level of existing capacity, not in the least because of a long simmering independence conflict in Aceh, and the fact that much of that capacity, including government departments, was also wiped out during the tsunami.