01. back to the Caucasus 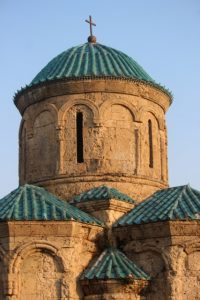 both in Georgia and Armenia, churches will be part of the program

Our return to Georgia, and continuation into Armenia, comes much later than initially envisaged. And things have changed!

When we left Georgia, last Autumn 2019, only halfway our planned Caucasus trip because of responsibilities back home – admittedly a rare occasion, responsibilities -, we had expected to return within a year, to complete the second part of this journey. Only to be caught up by the Covid 19 epidemic, which brought traveling to a halt for a while.

In the meantime we are three years further. No problem, no? Just pick up where you left it, and continue the original itinerary? Hmmm. Except that in those intermediate three years Nagorno Karabakh, officially Azerbajian territory, with a majority Armenian population, and since 1994 held by Armenia, recently passed from Armenian control back to Azerbaijan again after a short, but bloody war in 2020. And any opportunity to visit, certainly from the Armenia side, has now evaporated. I don’t think it’s a great miss, but it would have been nice to say that we had been there.

Oh, and that excursion to Abkhazia, one of the original drivers for our Caucasus visit? The break-away republic with its Soviet era beach holiday infrastructure, whose independence is acknowledged by Russia, and by nobody else, used to be easily accessible from Georgia – which of course didn’t admit that it was another country. Yet, under current circumstances, tension ever increasing between the West and Russia over Ukraine, it may actually not be a good idea to visit Russian-controlled Abkhazia. I don’t know, maybe it is no problem at all, but I rather don’t test the waters there, at this moment in time. A slightly greater miss, I think, but anyhow.

The good news? We have more time for the rest of Georgia, and for what is left of Armenia. So we have adjusted the itinerary somewhat, even included a stop at the Black Sea coast, and intend to take our time. Well, sort of, because there is actually still quite a lot of ground to cover. And once again, there isn’t a lot of time, just over four weeks only, because once again, those responsibilities back home. We must be doing something wrong!

By the way, don’t forget to check up on the history of this fascinating region, I bet you forgot most of it again!