31. looking back at Armenia 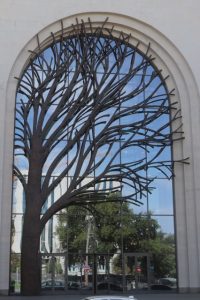 an artwork, a metal tree, in front of a mirror in Yerevan

What have we learned from our two-and-a-half weeks in Armenia?

Two-and-a-half-weeks in the middle of the summer isn’t enough to proclaim a definitive verdict about Armenia, of course not. Nevertheless, we do have some observations to share. And the most curious one is the mentality of Armenians, as opposed to neighbouring Georgians. Where in Georgia we never had to worry about the honesty of the people, in Armenia we immediately ran into trouble with overcharging taxi drivers. We had to count the change we received from the fuel station attendant every time; too often, we didn’t get enough money back.  We found that we had to check the restaurant bill every time – not easy, given the impossible script in Armenia! -, and too often there was more on the bill than we had consumed, immediately apologised away, of course, but it happened too frequently to be an accident. The pharmacist, who scans the barcode of the box of antibiotics, then takes one strip of pills out to hand to me, and keeps the box, with the second strip, behind. And is then surprised that I want the rest of the box, too. 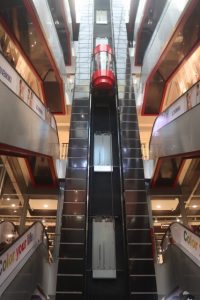 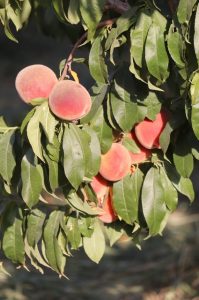 plenty of fresh fruit during our visiting season 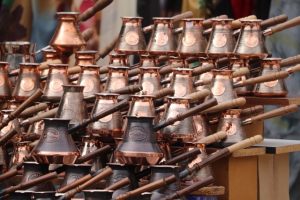 copperware in the Vernisage market in yerevan

There is also no concept of a client-oriented service industry. On our first day already, the hotel has given our room to somebody else, and doesn’t think anything of it. The car rental company cannot deliver the booked car in time, and simply tells me so, at nine o’clock the night before, without offering a solution. On two occasions the hotel or guesthouse we stay tells us last minute, although we have agreed to have dinner there, that – unfortunately – they cannot provide this, better find another place to eat. No attempt to assist, and most of the time no apology. It is our problem, not theirs. This, together with the cheating, puts us off Armenians, a bit. 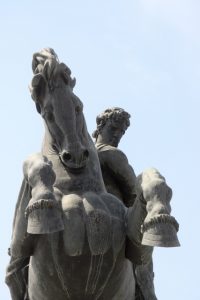 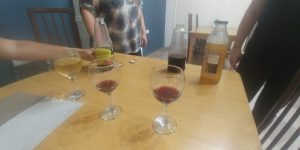 informal tasting of home-grown wines in a restaurant in the outskirts of Yerevan – note the bottles!

Of course, we meet wonderful people, too. Our guide to Ughtasar, the group of friends near Lake Sevan, the hotel staff in Goris (who have specially prepared a farewell gift for us!), the restaurant owner in the outskirts of Yerevan, and lots of others. But with so many negative experiences in such a short time, it doesn’t feel good. 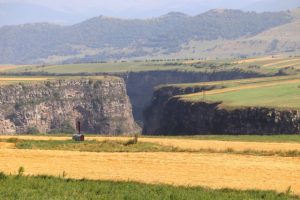 some of the landscape is dissected by steep gorges 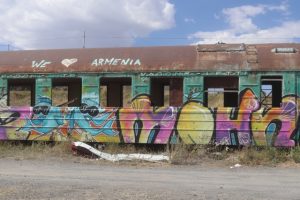 train carriage at the shore of Lake Sevan 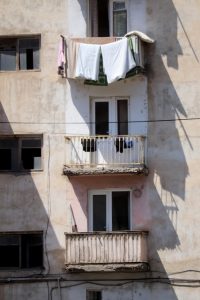 The country itself has a lot to offer, lots of tourist sights – although the selection is heavily skewed towards churches and monasteries. Of which quite a few are, in fact, fabulous, either because of their setting, or their construction and decorations, and no church is the same. Then there are the petroglyphs, the caves, the derelict Soviet factories and the palatis; modern Yerevan, with its abundant art expressions, its sculptures; its impressive genocide memorial. The countryside was a tat monotonous, also because in August everything is yellow, burnt. With temperatures in the high 30s, every day, you cannot expect anything else, but most likely in spring time it will be more attractive. In places where deep gorges cut into the landscape, the Debed Gorge or around Goris, the landscape is immediately much more spectacular. So are the many outcrops of basalt ‘organ pipes’. 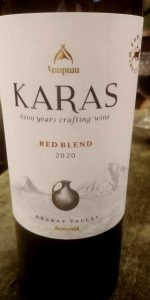 one of the more palatable wines in Armenia

Some of the local wine is quite nice, the food is generally good. Traveling with a rented car is a piece of cake, as long as you have a GPS to overcome the written language barrier  – nevertheless, here, too, like in Georgia, drivers have maniacal tendencies, they have this urge to overtake for the sake of overtaking; they do not necessarily drive much faster than you, afterwards. And they overtake whenever they think it is opportune, which is not necessarily my, or indeed many of the oncoming traffic’s, view. But as in Georgia, everybody expects lunatic drivers, and is prepared, although the road accident fatality rates here, with well over 17 per 100,000, are significantly higher than Western Europe, where it hovers between 2.5 and 5. 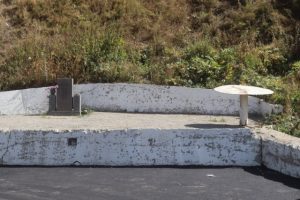 a bench and table for friends to gather to mourn their companion, deceased in a road accident

Do we regret coming to Armenia? No, but perhaps we should have selected a different season, not the height of summer. Will we come back? Nah, probably not, we have seen what there is to see, as far as the main sites go. And there are other places more attractive, I think.

Having ‘done’ the South Caucasus in two tranches (look here for the earlier travelogue), we may have to come to the conclusion that, funny enough, from the three countries we have now visited, Azerbaijan was probably the nicest. Perhaps unexpectedly, given the amount of focus tourist promotion sites normally give to Georgia and Armenia, but we have always been put off somewhat by too many tourists, and too much related infrastructure. You know, I’d go back to Baku in Azerbaijan anytime! 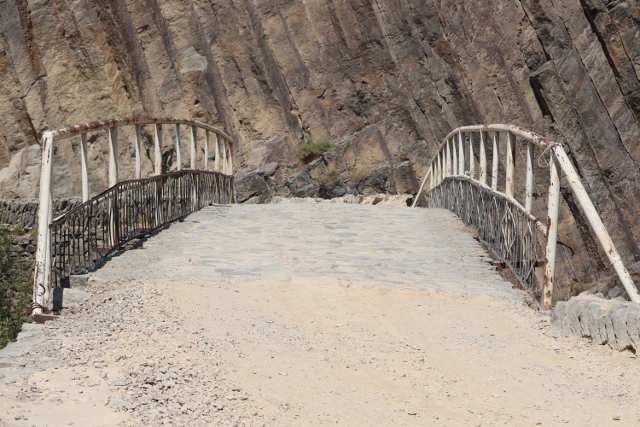 the bridge across the Vorotan River in South Armenia, in front of local basalt outcrop 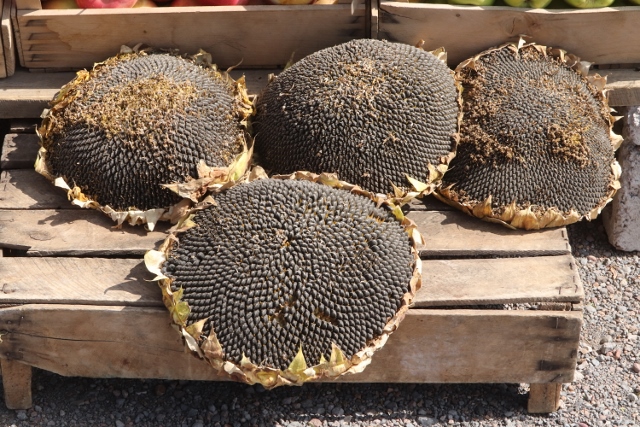 sun flower seeds are a delicacy in the entire Middle East