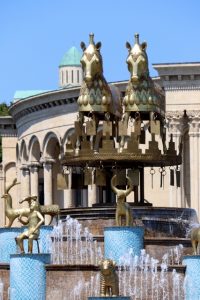 the Colchis fountain, in the centre of Kutaisi

We left five weeks ago, and I am afraid this is only the first travel entry to this blog. We have been just too busy traveling, writing, organising, no time left to sort out the photos and take time to post. Anyhow, apologies, from now on – we have arrived home again – the experiences will appear regularly, on this site. Keep checking!

Georgia’s second, or third, largest town is a relaxed affair, without any major sights, but lots of reference to Colchis, supposed to be Georgia’s origin.

A splendid new modern airport terminal building greets the visitor to what used to be Georgia’s second city. Used to be, because it has been overtaken by Batumi. Yet, however modern, even this airport needs staff to operate, and like so many other airports these days, personnel shortages are evident: whilst we are wizzed through passport control in no time, it takes almost an hour for the luggage to appear, piece by piece with large intervals in between. We are the only arriving flight, in that time. But once outside, we manage to avoid the army of sleazy taxi drivers and get onto one of the frequent mini-buses, directly to the centre of town.

That centre is the impossible to pronounce, let alone remember, Davit Agmashenebelis Square. This is the David better known to us as David the Builder, widely regarded the most successful king in the Georgian Bagrationi dynasty. He ruled from 1089 to his death in 1125, in the process liberating Georgia from Seljuk occupation and expanding the kingdom significantly beyond its current borders. Yet, the name the Builder does not refer to his creation of a Greater Georgia, but to the many construction projects – monasteries, cathedrals, universities – he initiated. The square used to contain a statue of David, but this has since been replaced by the Colchis Fountain, a tasteful structure adorned with images based on gold jewellery found at the archaeological site of the same name. 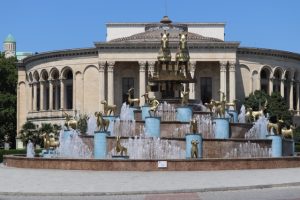 the Colchis fountain in front of the theatre 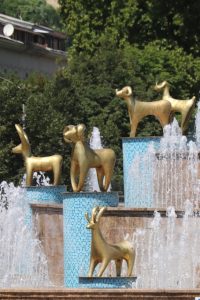 some of the details of the fountain, based on jewelry found in Colchis

Colchis, also called Kolkheta, dates back to the 17th C BC. Located on the Black Sea and the destination for the Argonauts – those of Jason, searching for the Golden Fleece (check your Greek mythology) -, Colchis is widely seen as the earliest settlement of the Georgian nation. A second reference to the place consists of a huge panel, on the outside of Green Market, also near the centre. This – very Soviet-like – panel was made by a local artist, Bernard Nebieridze, during the early 1980s, but only installed in 1995. It is full of symbolism, lots of it lost on me, but it has some nice elements.

the Kolkheta panel, in front of Green Market 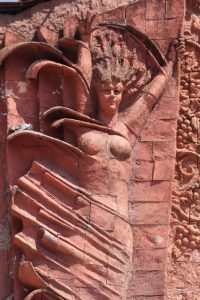 full of symbolism mostly lost on me 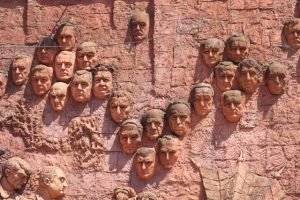 with images also based on Colchis, and Georgian history 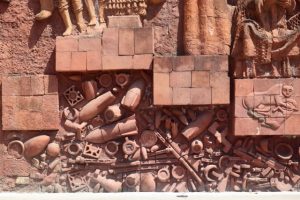 although part of it is quite clear to understand

The square – and the fountain – is really the heart of Kutaisi, traffic circling around. But there is never a lot of traffic, it is not really busy. Second or third largest city, Kutaisi is really a small provincial town, and it breathes that atmosphere, relaxed, unhurried. Very pleasant, really. Next to the square is the leafy City Gardens, there is a State Theatre, an Opera Building, and that eternal favourite of ours, the market. A large covered market, this time, but with the character of an open one, abundant fruit and vegetable stalls. Sellers that want you to try their ware, insist on you tasting their spices, their fruit, their walnuts – there are walnuts galore in Georgia!. We end up purchasing some strong smelling herbs and some fruit, and carrying off lots more fruit as a present. 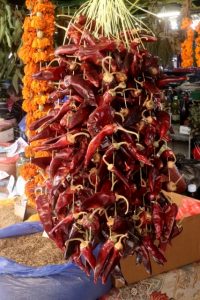 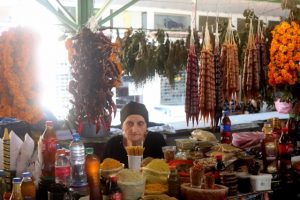 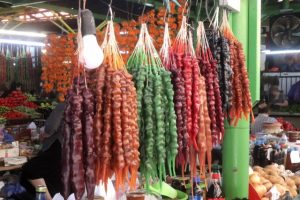 and these are churchkhela, a traditional Georgian sweet of nuts on a string, in condensed grape or fruit juice 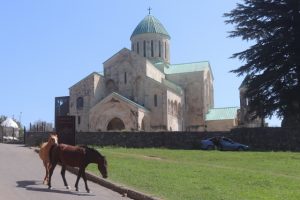 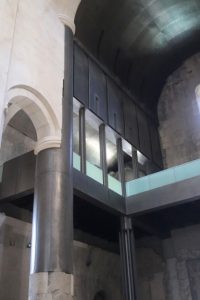 the inside restored with modern techniques, compromising the accepted wisdom of using original materials 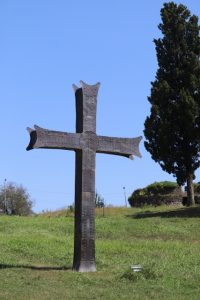 outside the cathedral, a large metal cross

Kutaisi’s main attraction is its Bagrat Cathedral, a short stroll up the hill to the north of town. There are ruins on the site going back to the 4th Century, but the current cathedral was started in 1003. In 1692 the Turks destroyed the building, leaving it roofless and ruined, yet, it was impressive enough to make it to UNESCO’s World Heritage list in 1994. Only to be removed again in 2015, after brutal restoration including a new tower and a new, horribly green roof. The modern addition indeed dissonate, compromising the whole cathedral experience. 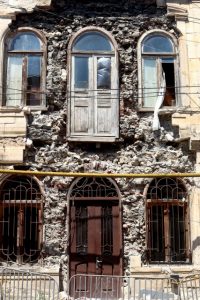 not every building has been restored, yet 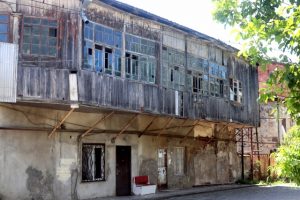 one of my favourite houses in Kutaisi, note the red bench in front! 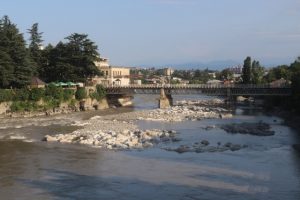 the bridge across the Rioni River, with ample terraces along the banks 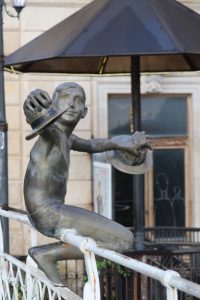 sculpture on the bridge

Having wandered around a bit more in town, seeing a modern art gallery and the historical museum – with a fabulous range of 10-11th C gold and silver icons -, one is left with the Rioni river that flows through Kutaisi, and provides ample room for a few terraces along its banks. Here we reconnect with Georgian wine and food. Could be a worse start of the trip, no? 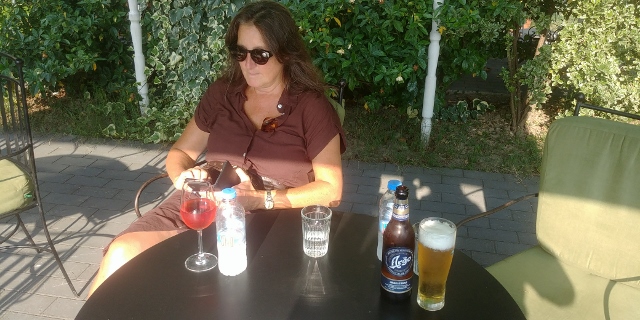 end of the day, reconnecting with Georgian food and drink

One Response to 03. Kutaisi