15. another look back on Georgia 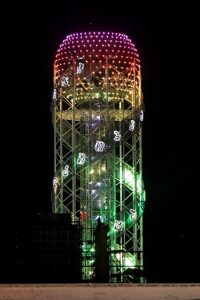 the Alphabetic Tower in Batumi, at night

Our second visit to Georgia largely confirms the conclusions we drew earlier, of it being, in fact, quite a normal country, with predictable responses in the most touristic areas.

On our last day in Georgia we drive from Gori to Tbilisi. On the way, we decide to see two more churches. The first one, Samtavisi, we find easily, and turns out to be a nice structure, quite big, and extensively decorated on the outside. An ongoing funeral prevents us from going inside. The second church, in the village of Ertatsminda, is more difficult to find, we get lost several times in narrow, unsurfaced roads. And when we finally find the church, it is almost a carbon copy from the first one, striking in similarity. Here we do get inside, but the few remaining frescos haven’t been preserved very well. 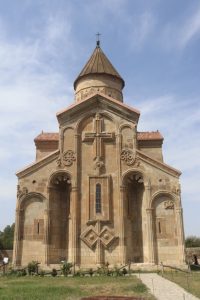 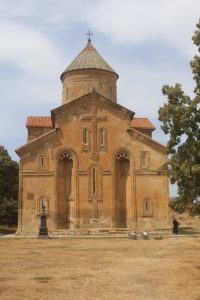 and the very similar one, in Ertatsminda 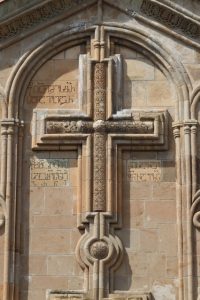 church with a cross (Samtavisi) 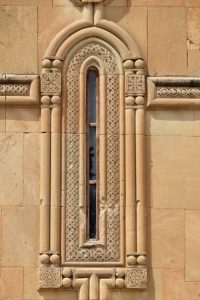 or a decorated window (Ertatsminda) some frescoes remain in the church of Ertatsminda 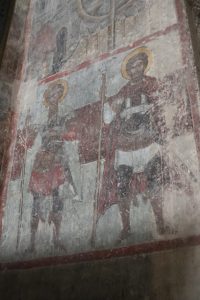 although they are not that bright, in a dark church

On the way back we have plenty time to reflect on Georgia. See if we have to adjust our earlier assessment that Georgians, on the whole, are perhaps not the friendliest of people. Like our first journey here, we found people in the more remote, rural areas nice enough – our first days in Kutaisi were wonderful, our last evening in Gori, too. But in between, passing through the more touristic areas, the Svaneti region and the Black Sea, Batumi, most were indifferent, business-like but not especially sympathetic.

What else can I say? They drive like lunatics, many of them. They are honest, we never had the idea that we were being ripped off, whether in cafes or restaurants, or by the occasional taxi driver we used. Some of the people in uniform – the guard at the museum who refuses to let us in at 1 minute to ten, because the museum opens at ten, the police man in the Tbilisi railway station who decides that we cannot put our bags on the floor – have the typical attitude of people in uniform, but that is no longer a Soviet-remnant, I think, it happens in many more countries. The arrogance with which we are refused entrance to a restaurant because it is full: it happens in other touristic areas, too. In fact, Georgia is quite a normal country, like so many others. 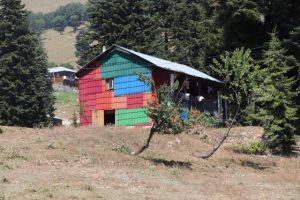 to be fair, some of the corrugated iron is colourful

It does have its unique selling points. The high Caucasus mountains are spectacular, and the added attraction of Medieval villages with stone towers, in Svaneti, makes it special. The caves in Vardzia, the last remaining old houses in Batumi, the only one Stalin Museum in the world. But much of the country side is just nice, but not spectacular; not very picturesque, either, the hills are scattered with pretty ugly houses and with corrugated iron. And many of the churches outside the main towns are closed, and nobody has any intention to open them for you if you come along. Sometimes it was quite clear that the caretaker lived next door, and it must have been equally clear to the caretaker that we were there, but that didn’t change the status of the church from closed to open. They couldn’t care less – which is quite different from our experiences in, say, Slovakia or Hungary, not so long ago. Hmmm. 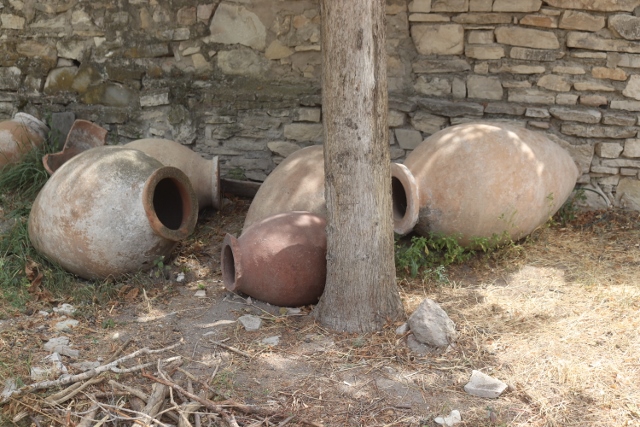 the train to Yerevan 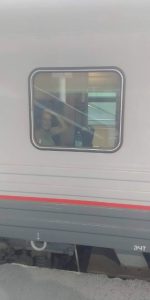 including a haphazard tourist on her way

We ended our trip in one of the sulphur bath houses in Tbilisi, one of the things we hadn’t managed last time in town. The thing to do here is to rent a private room, in our case a room for two, and enjoy the hot water, accompanied by a cold beer. Without a booking this turned out to be a challenge, with most of the bath houses we tried: no, impossible. Luckily, the woman running the Gulo Thermal Spa was very helpful, and extremely friendly, and made sure we did have a fabulous time on our last afternoon in Georgia. But then, she turned out to be from Azerbaijan, not Georgian.

Refreshed, we got to the railway station, well in time for the train to Yerevan, in Armenia. Or check out some additional history notes on Armenia. 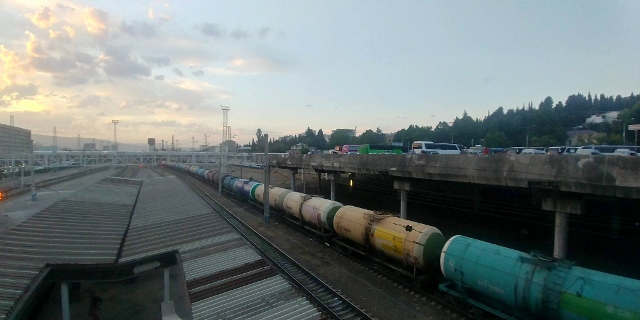