15. another look back on Georgia 17. Yerevan 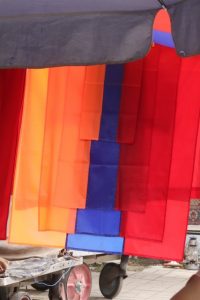 Part Two of a very brief history of the South Caucasus.

Three years ago I wrote an early entry to this blog, about the history of the South Caucasus. I mentioned Nagorno Karabakh as a predominantly Armenian-populated area, which, although technically – internationally recognised borders and the lot – belonging to Azerbaijan, it was under de-facto control of Armenia. I also mentioned the Armenian Genocide, without going into much detail then.

Nagorno Karabakh first: In the early 1920s, before the formation of the Soviet Union, Bolshevist forces were gaining control in the politics of then still independent Armenia and Azerbaijan. All of those, including the Revolutionary Committee in Azerbaijan, agreed that Nagorno Karabakh should be part of Armenia. Enter young Stalin, then Commissioner of Nationalities in Moscow, who, in order to please the Turks, assigned Nagorno Karabakh to Azerbaijan. The second objective was less outspoken at the time, but Stalin also reasoned that by creating ethnic tension between population groups, these groups would at least not unite against the Motherland.

Even before the Soviet Union disintegrated, massive demonstrations in 1988, in Nagorno Karabakh, and also in Yerevan, in Armenia, demanded the secession of Nagorno Karabakh from Azerbaijan, to be united with Armenia. This led to ethnic tension – so well envisaged by young Stalin – and killings on both sides, but when the Soviet Union finally collapsed in 1991, Nagorno Karabakh had been assigned to Azerbaijani control. Promptly, Nagorno Karabakh  declared independence, Azerbaijan decided to block the territory – which it entirely surrounded – and Armenia got involved to help their ethnic brethren, with Russian support, leading to a war which only ended in 1994. With the de-facto control of Armenia over Nagorno Karabakh, plus a substantial buffer zone in between the exclave and Armenia proper. From which the Azeri population was ‘encouraged to leave’. And it took until last year, 2021, for the Azeris to reignite the war, and with Turkish support handsomely defeat the Armenians and take back control. And, I suppose, ‘encourage the original Armenian population to leave’. And that is where we are now. 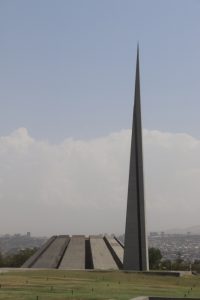 the Genocide memorial in Yerevan 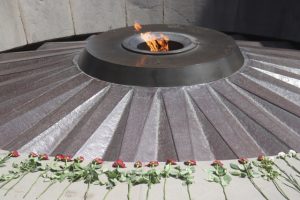 including the eternal flame, and flowers left by people

A second issue forever associated with Armenia finds its origin even earlier, at the end of the 19th Century. With the Ottoman Empire in decline, after losing a war against Russia, the Muslim Turks saw the Christian Armenians that lived with in Turkey as supporters of Christian Russians, the enemy. This led to the first pogroms, in which perhaps 300,000 Armenians were slaughtered by Turks and Kurds between 1894-1896. With the arrival of the Young Turks, replacing the political power of the sultan, things got worse, and there is significant evidence that what culminated in the Armenian Genocide, was carefully planned years in advance. Armenian soldiers in the Turkish army were routed, and killed, then the Armenian intellectuals in Istanbul and other cities were arrested, and killed. And then all remaining Armenians were driven out of their villages, mostly in Eastern Turkey, and out of the country, on forced marches eastwards, some to the Armenian homeland and most into the Syrian desert. Whatever these people had with them, was stolen at gunpoint. Women were taken away, for obvious reasons. Children were tortured – I have no idea why you would do something like that. Some 1.5 million Armenians died, from hunger and exhaustion, and from direct killing by Turks and Kurds.

And although grudgingly, several mostly Western countries have recognised the episode as a genocide, the Turkish government continues to deny that there was ever an issue at all. And that is where we are, with this one.