30. the road back to Yerevan 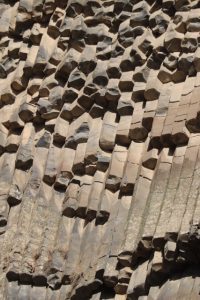 basalt ‘organ pipes’ outcropping close to the Geghard Monastery and the Garni temple, SE of Yerevan

Wrapping up, on the way back, we visit the last – but not the least – monasteries, and a temple that somehow doesn’t fit here.

We are on our way back to Yerevan, to catch a flight home. Along the road, we are wrapping up the last few sights, the ones that have eluded us so far. We have done pretty well, I think, criss-crossing the country in the last two-and-a-half weeks. Seeing almost all the important monasteries. Except two. 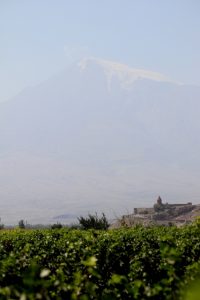 the Khor Virap monastery, with Mount Ararat in the back

Khor Virap is perhaps historically the most significant monastery in the country. It was here that, according to legend, King Trdat III, who ruled Armenia at the beginning of the 4th Century, threw Gregory the Illuminator, a convinced Christian, in the dungeons – a snake-infested pit, no less – for 13 years. Not smart, of course, because all kinds of disasters than fell upon his kingdom, and upon himself, in the form of terrible illness. It needed a vision from Trdat’s sister, seeing that Gregory was the only one who could save the king, which led to the release of Gregory, who then healed the king, and in the process converted him to Christianity. Officially, all this happened in 301 AD, making Armenian the first country to adopt Christianity as a state religion – although quite a few scholars think it more likely that this happened a little later, perhaps 314, after the Roman Emperor at the time had turned Christian himself. After all, Trdat was ruling with the consent of Rome, at the time, and going against the dominant Roman believes would have been suicide. 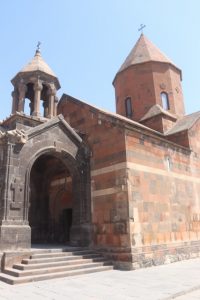 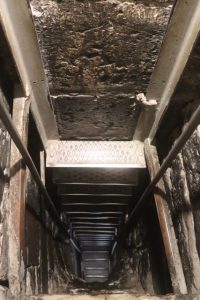 the stairs to the dungeon of Saint Gregory the Illuminator 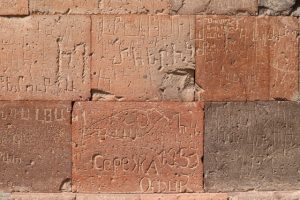 graffiti at the monastery, shockingly as recent as 1971!

The monastery itself is not particularly interesting, the present building, from 1669, is also comparatively new in Armenian architectural history, and decorations are limited. Most noticeable is that the walls are scratched with 20th C graffiti. True to form, inside one of the two churches one can descend, via proper metal stairs these days, into the Gregory’s dungeon. Or so they say. Thankfully, the have removed the snakes. However, the setting of the monastery, with Mount Ararat in the back, is quite nice, and, of course, Ararat being Armenia’s holy mountain, adds to the significance of Khor Virap. 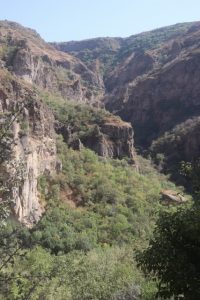 the gorge of the Azat River, beyond the monastery one of the entrances to the manastery 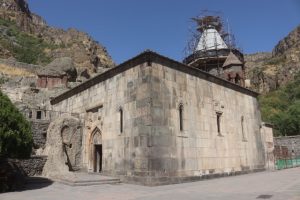 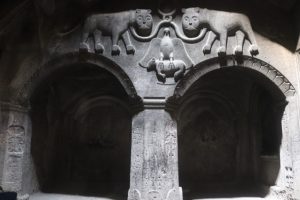 a dug out chapel, with elaborate bas-reliefs 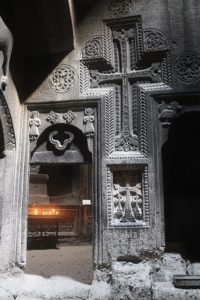 including crosses, and lots of images 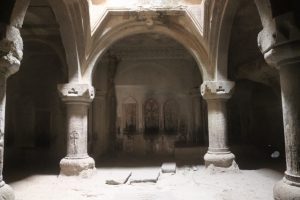 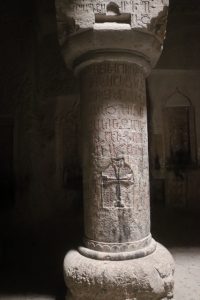 Well, one more monastery, and then we are done. Not far from Yerevan is the Geghard Monastery, the last one on the list. All the same anyhow, no? 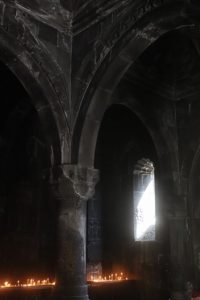 inside the gavit, columns and candles

But we were quite unprepared! The outside of the Geghard Monastery is being repaired, one wall and the dome are covered in scaffolding. But in Geghard you don’t come to see the building, a relatively small church. This monastery is quite different from any of the monasteries we have visited so far, as most of the complex is actually hewn out of the rocks. So from the church several rooms lead off, one to a water spring – where lots of people try to fill plastic bottles with this holy water -, the other into a series of rooms and chapels, constructed by removing rock, rather than stacking lego blocks. Very much like Lalibela, in Ethiopia; every detail inside is a in fact left-over of rock, including every column, every niche and every carving, every delicate decoration. Outside the main church, steps lead up, to a second rock-hewn church, less elaborately decorated, but equally impressive, with half-columns left in the rock walls. This is fabulous! And for good reasons, on UNESCO’s World Heritage list.

Fittingly, the first monastery on this site was established in the 4th C, by Gregory the Illuminator. However, it was sacked and destroyed by the Arabs in 923, before being rebuilt again starting at the end of the 12th C. Many of the caves date from the 13th C – there are some 20 in total, many more than we saw. And like so many other monasteries, the setting is once again great, halfway up the gorge of the Azat River. Towering mountain walls all around us. 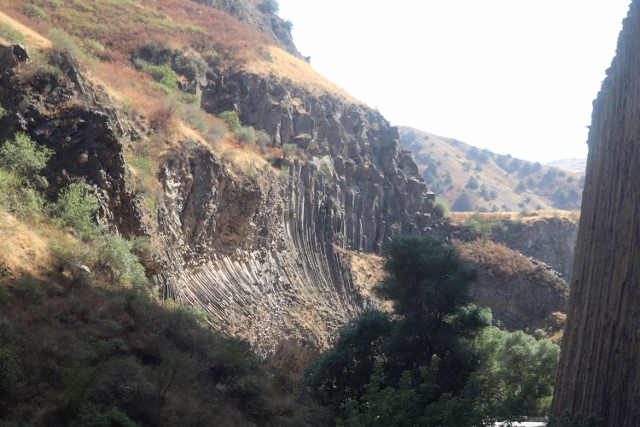 the Symphony of Stone, basalt outcrop in a tributary of the Azat River 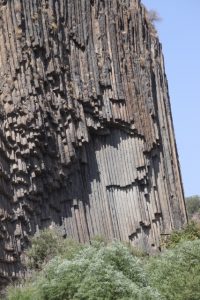 seldom is nature so organised 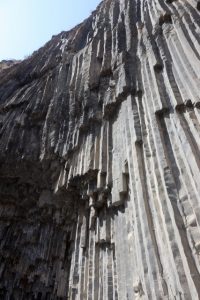 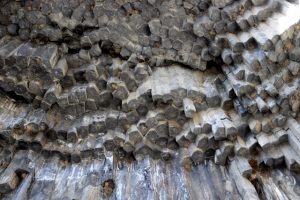 and their hexagonal shapes visible from below 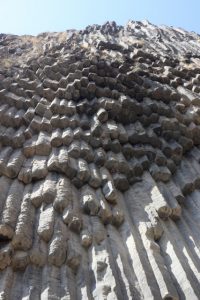 A little further up the gorge, still of the Azat River, is another outcrop of basalt columns, once again called Symphony of Stone. This one we cannot miss, as it is being exploited as a tourist site – including entry ticket and the lot. But it is worth the effort, and the ticket: all along a road down a side valley, the characteristic ‘organ pipes’ rise to the sky, sometimes in long columns, straight up, and in other places strangely folded, sometimes broken up. Doing everything they can, it seems, to display their beautiful hexagonal shapes. Much better than the one we missed in Sisian, no doubt! 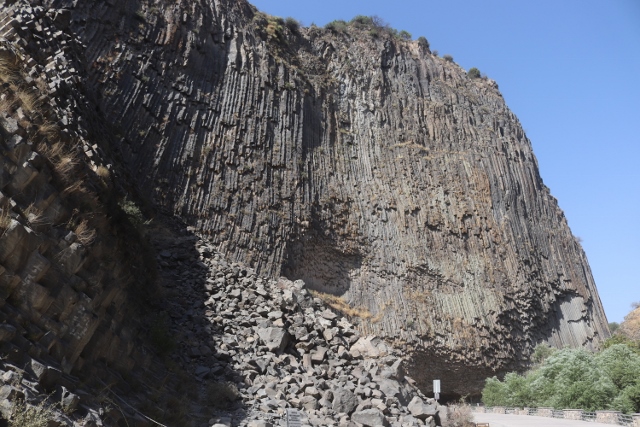 and this is just part of the outcrop 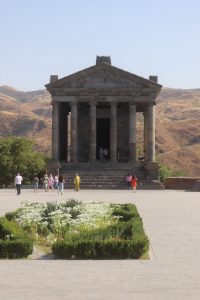 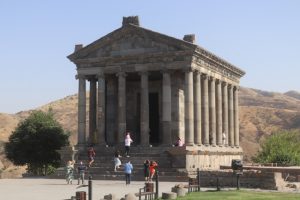 another view of this Graeco-Roman structure, unique in Armenia 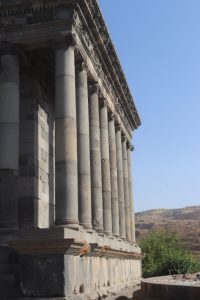 looks a bit like the basalt pipes, no?, but then round 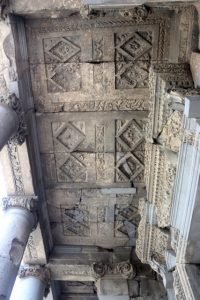 the ceiling of the portal of the temple

Because it is so close, we also drive down to what is called the Garni temple. This is the only Graeco-Roman style building in Armenia, adorned with columns on all side, a little Parthenon, really. And it doesn’t fit here, or that is our first impression. It has nothing to do with Armenia. It may have been a 1st C pagan temple, or a tomb for a ruler, who was heavily influenced by Rome. As so many other Armenian buildings, it was heavily earthquake-damaged, and restored during the 1970s. But it still doesn’t belong here.

Next: wrapping up with a look-back on Armenia. 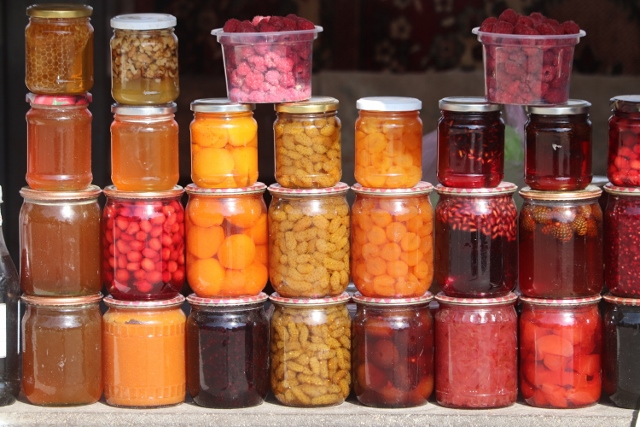 and as usual, a bit of colour to complete the rather grey and dull photo series of this entry