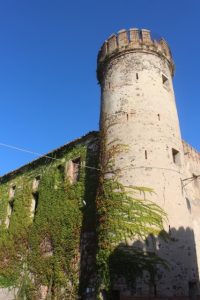 Not all our plans always work out perfectly well.

It is one of those days. We have planned to take the train, for a 16 minute ride, to Vicenza. We arrive at the station at 9.38, without ticket, and we clearly won’t make the 9.40 train. So let’s take the next train. But this leaves in a little over one-and-a-half hours, at 20 Euros a ticket, or in two hours, for a more normally priced ticket – I check the train times later again, and indeed, between 9.40 and 11.16 there are no trains to Vicenza; the rest of the day there is a train every few minutes, worst case after half an hour.

So we fall back on Plan B. We get to the car, for a drive in the countryside around Padua, visiting a few historic buildings, and perhaps take a walk in the hills. Somewhat later we arrive at the 15th C Praglia Abbey. Unfortunately, the guided tour has just left, 10 minutes earlier, and the next one is a four in the afternoon. No, we cannot visit the abbey without guided tour. And we are not going to wait another five hours. 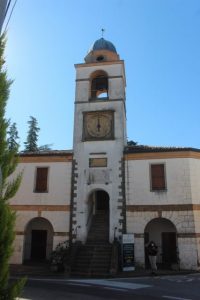 the small church at Teola, which was closed 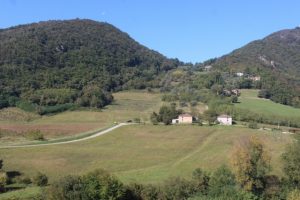 the landscape is quite nice, and at least it is open

We continue to Teola, a little village with a small church and a contemporary art museum. Which turns out to be open only at the weekends. It is Thursday today. Charming village Cinta Euganeo, another 10 kilometers further, is in fact not very attractive at all, so we decide to head for a restaurant near Torreglia, recommended in my guidebook – which has by now a track record of recommending good restaurants, this particular one also for the excellent views from the terrace.

The most direct route is closed off, for maintenance works, but we can go around. An extra 15-20 minutes on narrow, winding country roads, never mind. When we get to the restaurant, it is closed, only opens again on Friday (never mind that the website had claimed it to be open). Had I said already that it is Thursday, today?

Nearby is another monastery complex, high on the hill, and we decide to have a look there, so we can enjoy the view initially denied from the closed restaurant. We park the car on the way, and walk up, a pretty steep path. Halfway the road seems to be closed, but some forestry workers point at a track, which we can follow, further up the hill. When we finally reach the complex, it is closed for lunch, between 11.30 and 14.45. We ring the bell, but to no avail, these monks are not going to be disturbed. And we are not going to wait another 1.5 hours here, in between steep stone walls that obscure that spectacular view. And why didn’t these forestry workers tell us the place was closed, anyhow? At least we got our walk…. 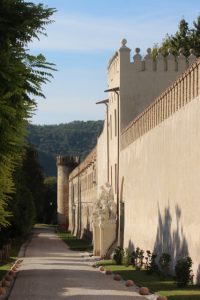 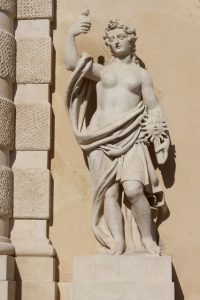 with decorations on the outside wall 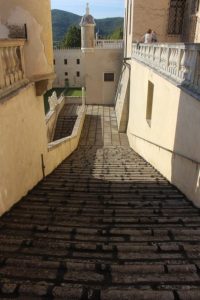 the stairs on the inside 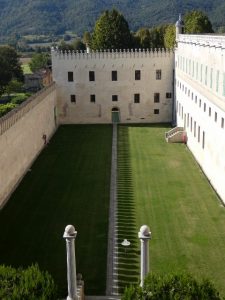 looking down in what is called the Courtyard of the Giants 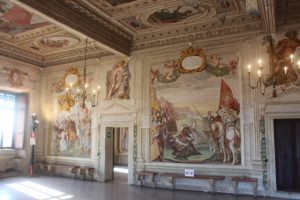 one of the frescoed rooms inside 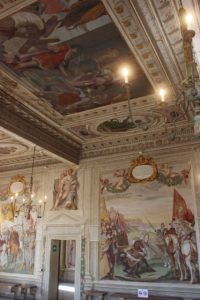 which continues on the ceiling 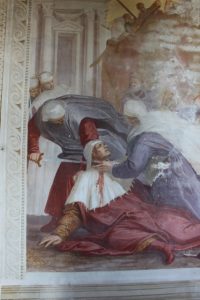 question is, who would want this sort of subject matter on the walls of the living room? 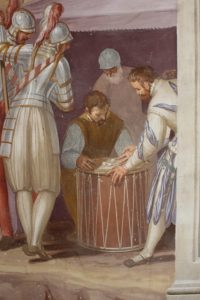 other details are funnier, like soldiers gambling in a corner

The idea to buy a picknick comes too late, supermarkets and other shops have closed for siesta – this is rural Italy. So we have lunch on a terrace in the sun in nondescript Torreglia, standard menu, nothing special, but by now anything will do.

The one activity that did work out according to plan was the visit to the castle Castello del Catajo, a castle that is really more a palace, with no less than 350 rooms – of which four are open to the public. Nevertheless, it is an imposing building, and the few rooms that are accessible show impressive frescoes on the walls – and hide the decay that appears to be in progress at the rest of the castle.

The idea of late afternoon in a spa is appealing, but when we have finally found the ideal place, only the pool is open, all other amenities – jacuzzi, sauna – are closed because of Corona. Which makes a spa a whole lot less attractive, suddenly, not in the least because within an hour the sun will be gone, and the outside pool too cold.

We head back to our hotel – something we would have done much earlier if we would have had a nice place, with garden and other comforts, but right now in Padua, we are stuck in some godforsaken B&B with no charm whatsoever. Anyhow, some you win, some you lose. Today was not our day.

Except that we found a great little pizza place, and a bottle of Amarone. 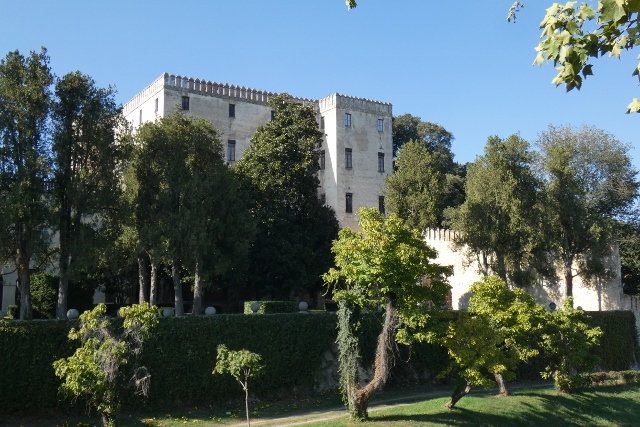 it is quite a remarkable castle, afterall

One Response to 06. outside Padua