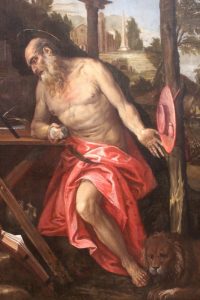 one of my favourites in the Galleria dell’Academia, ‘Saint Jerome’, painted by Paolo Veronese at around 1575 – note the dog in the right hand bottom corner!

The most important museum in Venice is, no doubt, the Galleria dell’Accademia, a monumental museum with an incredibly rich collection of Italian Renaissance paintings, starting in the 14th Century.

As I mentioned earlier, being predominantly interested in 19th and 20th Century modern art, I didn’t expect to be impressed much with Italian Renaissance art, but I was wrong. Where I had anticipated to be confronted with religious images in dark shades, I in fact greatly enjoyed the lively, colourful paintings – indeed mostly depicting religious scenes, of which no doubt lots of the symbolism has evaded me, but showing enough variation and technical ability to also entertain a layman like me. 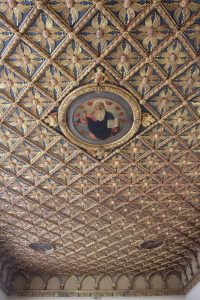 the 15th C ceiling of the first room of the museum, a former monastery

Some of the paintings are huge, filling an entire wall. Gentile Bellini’s painting Procession in the Piazza San Marco is almost 4 x 7.5 meters.  What is nice, of course, is that being in Venice, one immediately recognises the Basilica of San Marco, and the square in front of it, it hasn’t changed much since (perhaps a few more terraces, these days). But was strikes me most with this work, and many others, is the amount of detail present. I am the first to admit that such an enormous painting baffles me at first sight, but take your time, look close up, and you start discovering all kinds of fine details, paintings within the painting, so to speak. I have tried to illustrate that with some of the photos in this entry, a small selection of the almost 400 works that are, apparently, exhibited here – I didn’t count them. Of course, in such a rich collection there is much more to admire, too, like portraits that seem timeless – just look at Antonello da Messina’s blue Madonna in the ‘Annunciata’, or the bright, slightly naive ‘Madonna col Bambino’ byan unknown painter from the Venetian-Byzantine school. 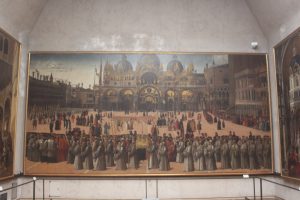 ‘Processione in Piazza San Marco’, a monumental painting by Gentile Bellini from 1496, and very recognisable for every visitor to Venice today 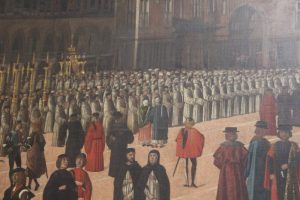 it is so huge, you don’t notice the details at first – until you focus and zoom in, like here, for the actual procession 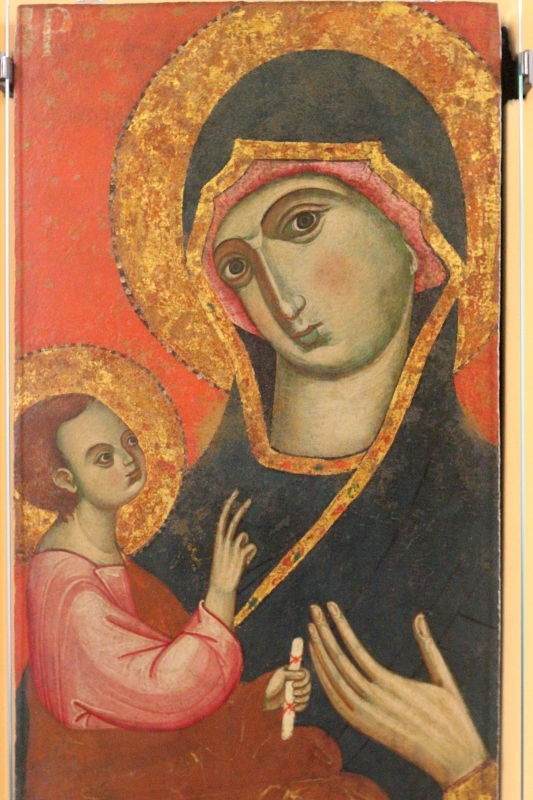 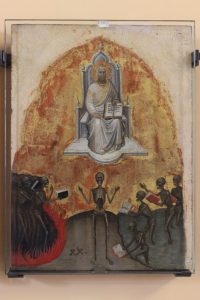 one of the five paintings that make up the ‘Polittico dell’Apocalisse’, painted by Jacobello Alberegno at the end of the 14th C and a detail – the lower half – of the same painting 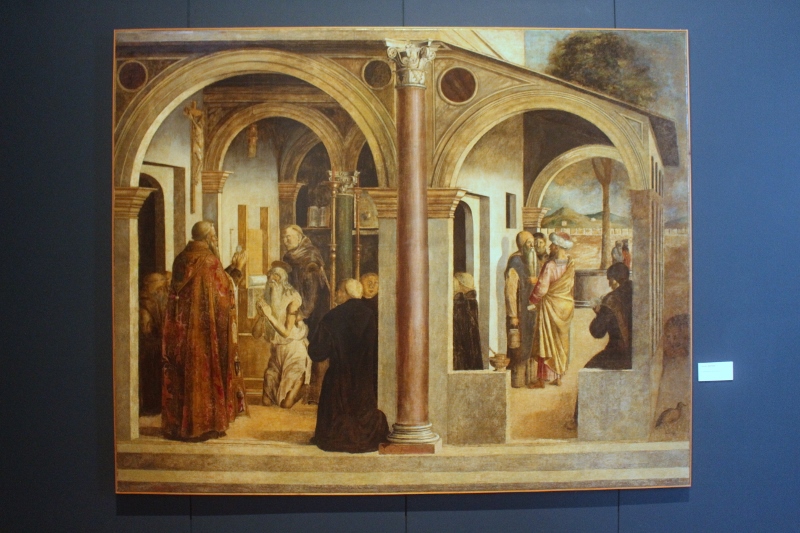 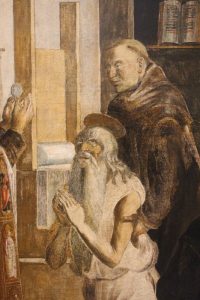 this is one of the details 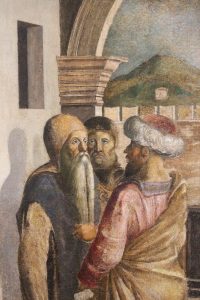 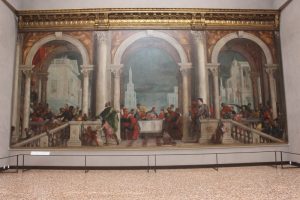 another Paolo Veronese, the huge, wall-filling ‘The Feast in the House of Levi’ (who later became the apostle Matthew); this painting was criticized for the many inppropriate characters – dwarf with parrot, drinking soldiers, see the details below -, which Veronese defended by pointing out that they were there for compositional purposes only, perhaps the first painter to claim artistic liberty. 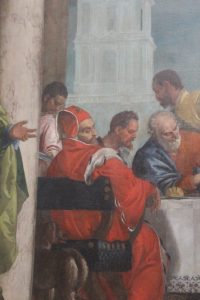 a detail, this one a fully acceptable notable participating in the dinner 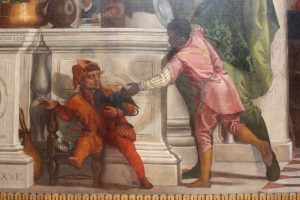 the dwarf with green parrot, one of the ‘inappropriate’ details 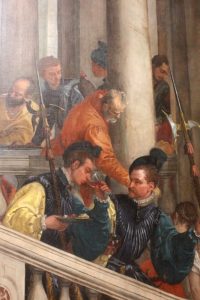 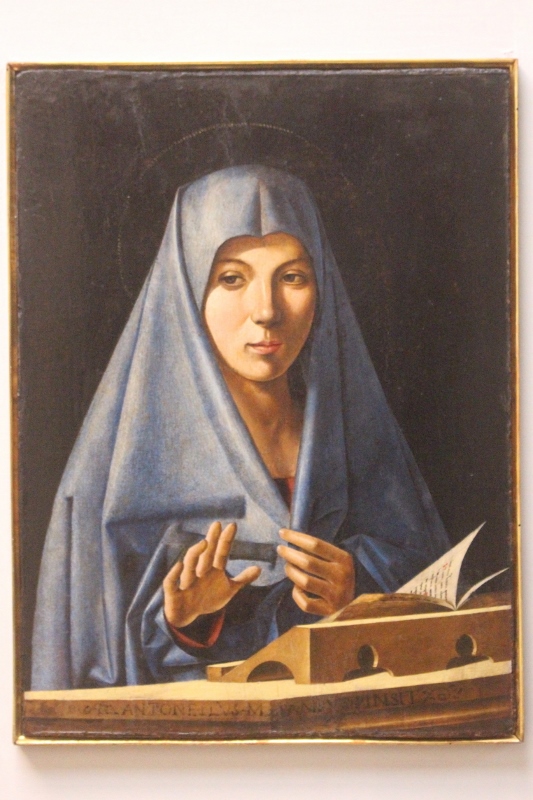 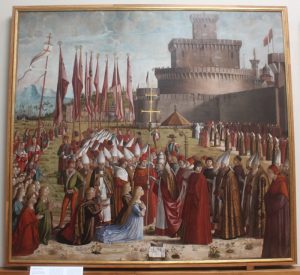 not a particularly nice painting, ‘Meeting of the Pilgrims Outside the Walls of Rome’ by Vittore Carpaccio, ca 1490, but I include it for the funny hats all pointing in one direction, see detail 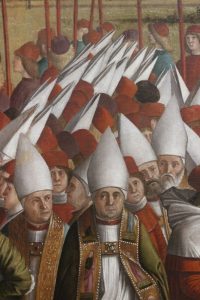 the funny hats, detail in the Carpaccio painting 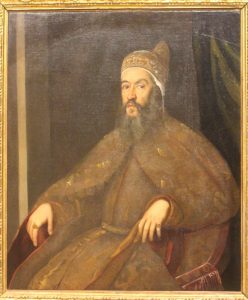 later in time came the individual portraits, like ‘Ritratto del Doge Alvise Mocenigo’, by Tintoretto, around 1575 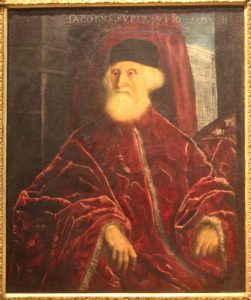 and this somewhat earlier one, ‘Ritratto del Procuratore Jacopo Soranzo’, also Tintoretto, from around 1550 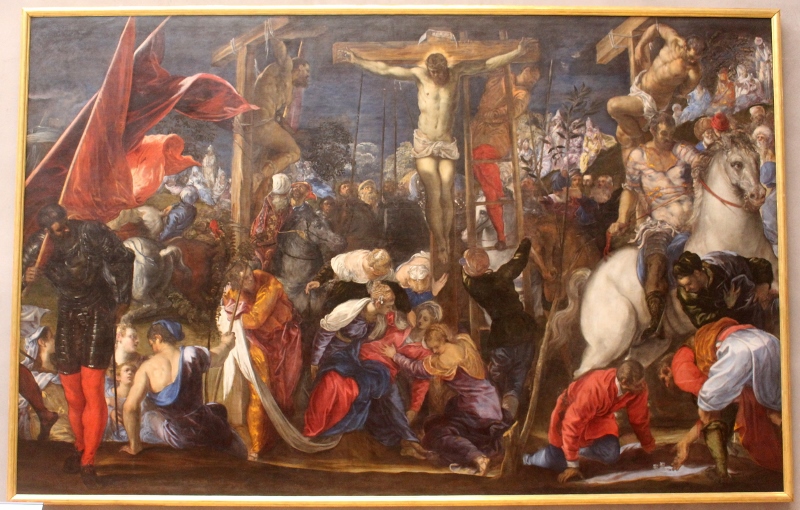 one of the many ‘Crucifixion’ paintings, this one a jolly affair by Tintoretto, ca 1555 – note the gambling soldiers in the right hand bottom corner 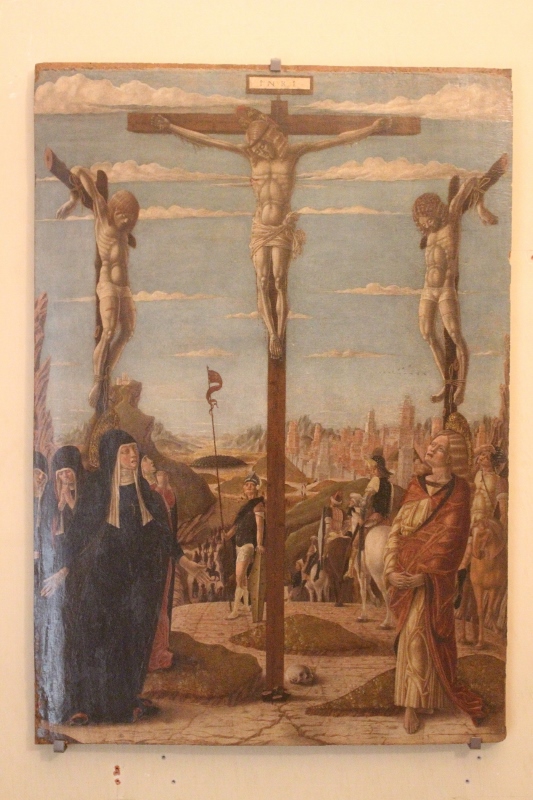 and another Crucifixion, this one almost 100 years older (ca 1460), and showing a far more sterile scene, painted by an unknown painter from the Paduan school