08. another day outside Padua 10. San Marino 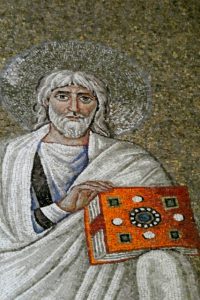 It was raining in Ravenna, but that didn’t affect the main attractions in town, an incredible collection of UNESCO World Heritage protected mosaics in several chapels and churches.

I wonder why it is that almost everywhere in Northern Italy they have churches and museums with medieval paintings, except in Ravenna? And why is it that in Ravenna, unlike everywhere else in Italy, they have mosaics? Perhaps this is because Ravenna is steeped in Roman and Byzantine history of the 5th to 8th century, older than most other Northern Italian cities. The time that mosaics were the decorative artform of churches, preceding the frescoes of Medieval times. We thought to take it easy, and take two full days for Ravenna. Which was perhaps too much, especially because it has been raining both of those days, and then Ravenna is not particularly pretty. On the other hand, it was weekend, and weekends are, despite the absence of foreign tourists, still pretty busy in Italy, with lots of locals flooding to the sites. Which becomes an issue because of the limitation to visitor numbers in the many places that support the mosaics, so we had to book for almost each and every place. 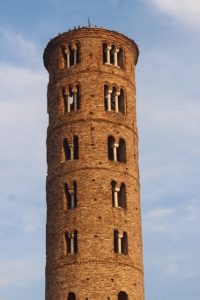 the clock tower of the Basilica di Sant’Apollinare Nuevo 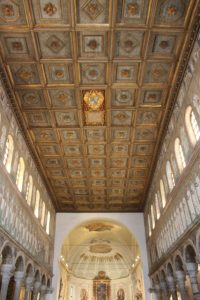 inside the Basilica di Sant’Apollinare Nuevo 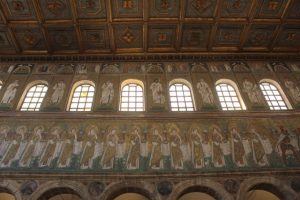 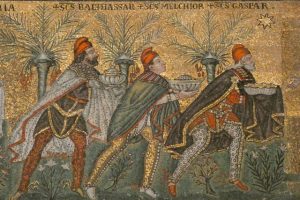 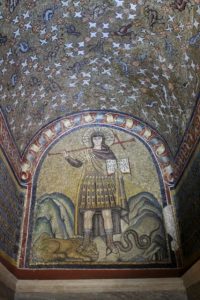 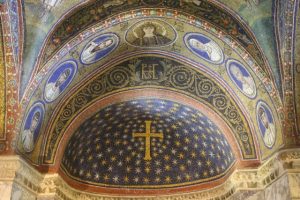 and the ceiling inside the Capella di San Andrea

There are five tourist sites on a combination ticket, which we divided over the two days. And yes, they are spectacular, not for nothing all UNESCO World Heritage Sites. Almost opposite our hotel is the Basilica de Sant’Apollinare Nuevo, with its characteristic round tower. Inside, the large nave is flanked on both sides by pillars, above which an array of virgins on one side and of martyrs on the other, all done with painstakingly small mosaic stones. Even some of the window decoration is done in mosaics. The next two sites we visit are the Capella di Sant’Andrea, which is inside the Archbishop’s museum, and the Battistero – the Baptistry – Neoniano, another tiny chapel. Both of them decorated all over with fabulous mosaics.

The Basilica di San Vitale and the nearby Mausoleum of Galla Placidia we kept for the next day. Even without the mosaics the Basilica is already pretty spectacular, with its marble on the sides and its intricate floor patterns. But the choir area, very high and decorated with, once more, great, and brightly coloured, mosaics, adds the icing on the cake. The Mausoleum, built for the half-sister of Roman Emperor Honorius around 425 AD, contains the oldest mosaics in Ravenna, much quieter because of its predominantly dark-blue colour, sublimely lit with the light that comes through alabaster windows. 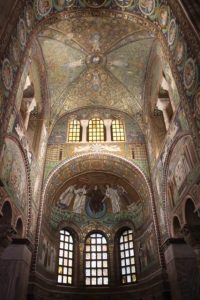 the high, decorated choir in the Basilica di San Vitale 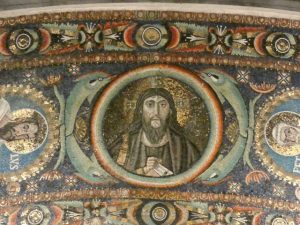 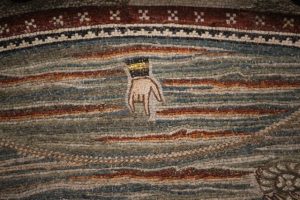 and the hand of God, Basilica di San Vitale 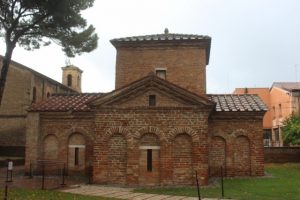 the outside of the Mausoleo di Galla Placidia 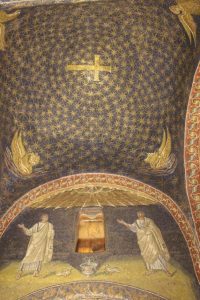 and inside, the ceiling of the Mausoleo di Galla Placidia 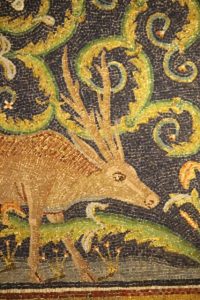 here the only place where not every mosaic has a religious meaning, Mausoleo di Galla Placidia

A sixth site, Battistero degli Ariani, also Unesco-recognised, is free, but not part of the ticket. So there is nobody when we get there, after having negotiated our way through the sodding rain. Have we booked? No we haven’t, but the chapel is entirely empty. Ah, no, but we have to book, otherwise we are not allowed in. Can we then book, here and now? Ah, no, this needs to be done via Internet. But there is nobody inside! It takes five minutes arguing before, finally, the supervisor sees the light, and lets us in. And in another five minutes, of course, we have seen the mosaics; it is, after all, a very small chapel. 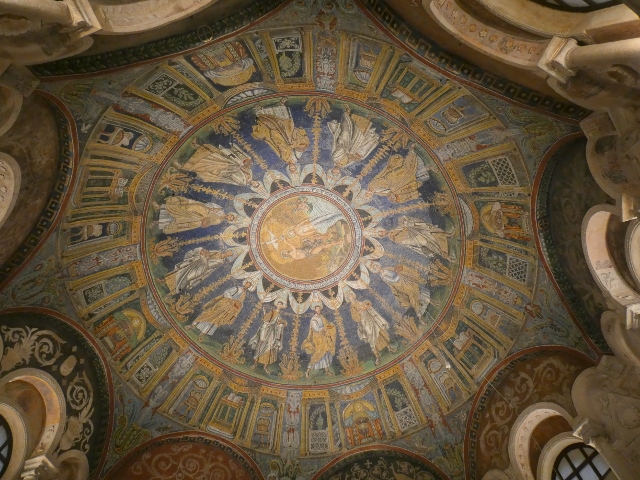 the ceiling of the Battistero Neoniano 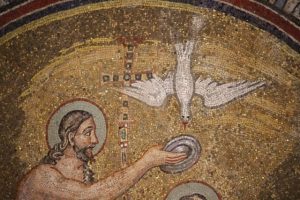 and a detail from the same ceiling, Battistero Neoniano 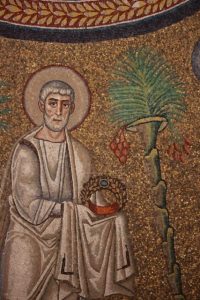 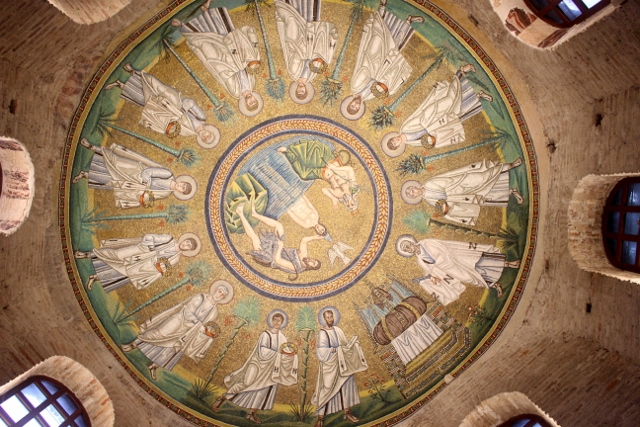 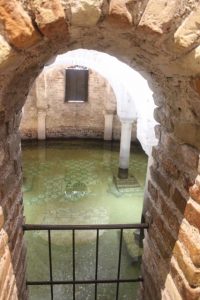 inside San Francesco, the mosaic under water 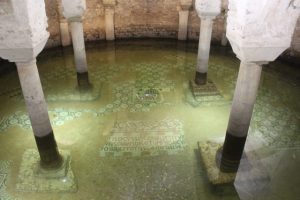 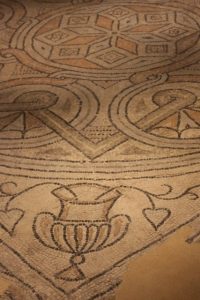 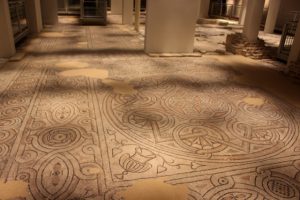 the carpet-like mosaics of the Domus dei Tappeti di Pietra 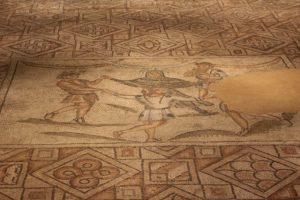 and another detail, dancing people

A few more mosaics are distributed across other sites, one popular one are the mosaics in San Francesco church, which are underwater, for no apparent reason. And another one, also less popular, is showing the floor mosaics of an old Roman villa, which looks very much like a carpet – and is thus called Domus dei Tappeti di Pietra. 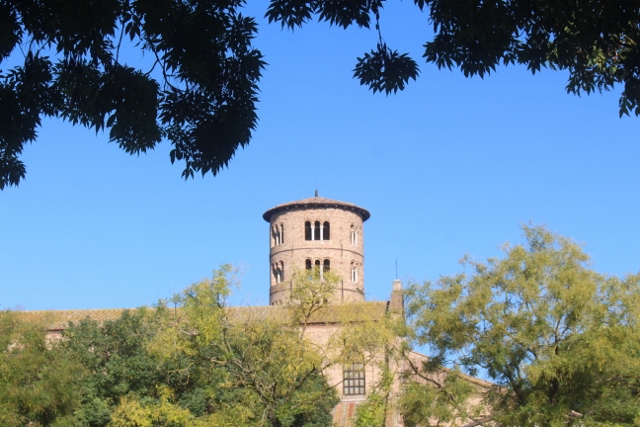 the Basilica di Sant’Apollinare in Classe outside Ravenna 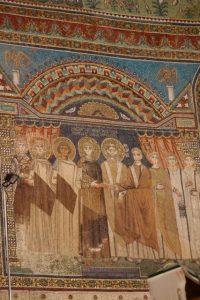 colourful mosaic, inside the Basilica di Sant’Apollinare in Classe 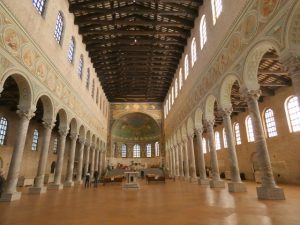 the spacious nave of the Basilica di Sant’Apollinare in Classe 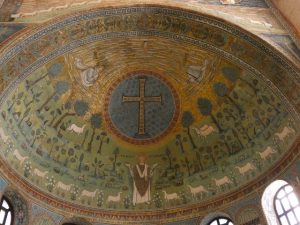 Oh, and outside town is another basilica, more mosaics, the Basilica di Sant’Apollonia in Classe – Classe being the now completely silted-up port of Ravenna. Big building once again, but here the mosaics are mostly limited to the dome above the choir, set against a mainly green background. Like almost all of the mosaics, these, too, are depicting religious scenes – some sheep depicting the apostles, others depicting believers listening to the preaching of Saint Apollonius.

And that it is. Nothing else in Ravenna that we found interesting enough to spend much time on. No culinary highlights either, or it must be the Chinese restaurant we found – finally one evening no pasta, pizza or pomodori. Luckily, we had booked ourselves a comfortable hotel, this time, where it was good staying whilst it rained outside. And the opportunity to update this blog.

Next: an excursion to San Marino.