Karel Appel Exhibition in The Hague 02. Mandi and Manali 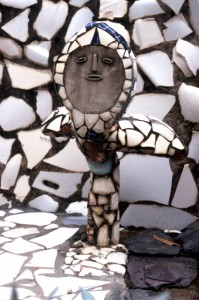 The relatively modern, planned city of Chandagarh is actually a bit boring, a bit sterile for an Indian town; but, it has the Rock Garden!

From Delhi to Chandigarh is not the most exciting terrain in India, certainly not compared to what we expect to see further north. We took a train; the early morning Shatabi Express, India’s luxury train service, brought us to Chandigarh. This relatively modern town was only created in the 1950s, after Partition – the post-colonial split between India and Pakistan – had put Lahore just across the border in Pakistan. Chandigarh was to serve as capital of two states at once, Haryana and Punjab, and the versatile artist/architect Le Corbusier was asked to design the new city. Compared to many other Indian towns, Chandigarh is well-planned, indeed. The town has a very peaceful aura, with quiet sectors – blocks of some 800-1200 meters separated by the main roads – well maintained wide avenues and round-abouts, very organised, but somewhat sterile.

Funnily, the highlight of Chandigarh is actually a distinctly unorganised place, the Rock Garden, initiated by a town engineer who collected the town’s rubbish, and recycled this into a contemporary art park. There are walls of broken sockets, a separation of pots and pot shards, and everywhere broken crockery and bathroom tiles; even whole urinoirs have been used in the decoration. And literally thousands of figurines are lining the paths, in all forms, animals like dogs, monkeys and camels, but mostly humans, made from broken tiles, crockery, bangles, with carved faces, or concrete: a fabulous variation of expressions. Going around takes at least an hour, and more if you want to get a good look at the different types of figurines. And all the time it is one-way, no shortcuts, no backtracking. In that, it is well organised Chandigarh, after all! 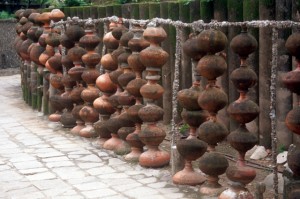 a wall of pots, Rock Garden 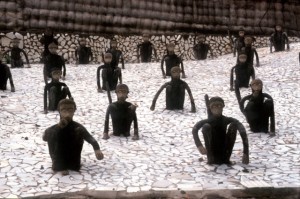 group of monkeys in stone 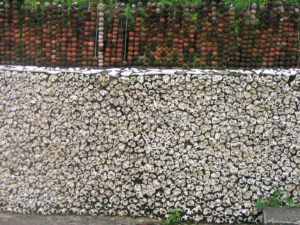 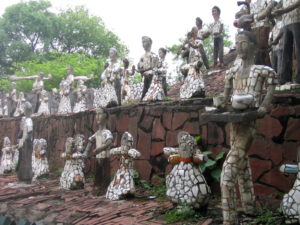 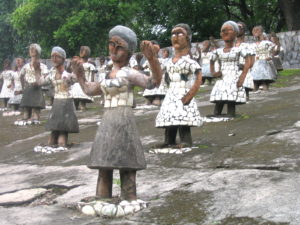 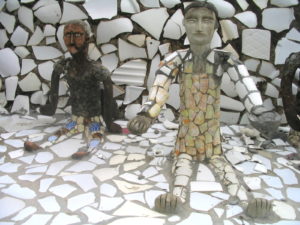 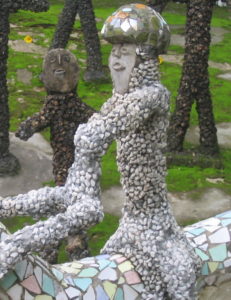 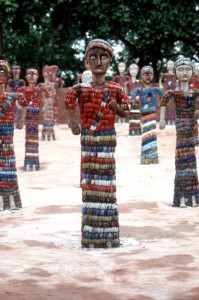 crockery sculpture in the Rock Garden

We managed to distract the State tourist board official despite being busy reading his newspaper, but the chap proved to be very helpful. He explained to us that the tourist bus tour that we wanted to take, is very nice indeed, a very good idea to do this, and he described all the interesting things that the bus tour has on its program, only to continue that unfortunately the bus had just broken down, and will need some 10-15 days for repair, perfectly well knowing that no tourist in his right mind could possibly spend so much time in Chandigarh. The bus probably broke down quite some time ago, and is unlikely to be repaired soon. 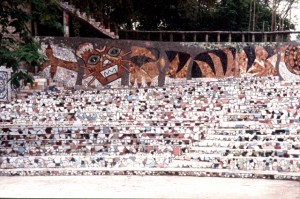 the amphitheater in the Rock Garden 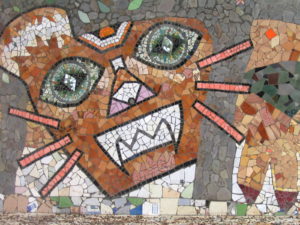 In another travel agency we enquired about renting a car to go to Sirhand, a place I had read about, but when the guy asked us why on earth we would want to go to Sirhand, as he was not aware of anything remotely interesting there, we abandoned the idea. Instead, we decided to leave for Mandi in Himachal Pradesh the next morning.

next: Mandi and Manali 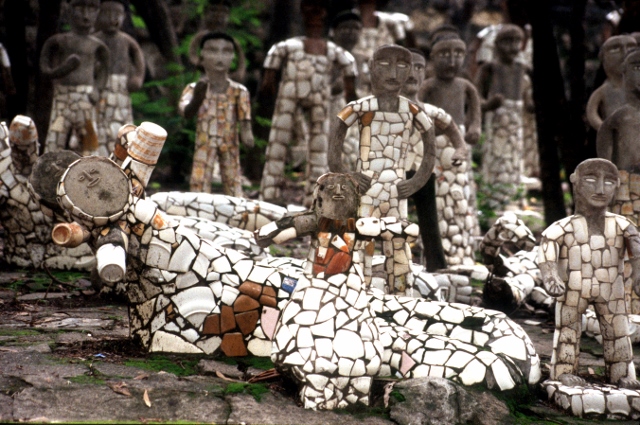 another sculpture from broken dishes