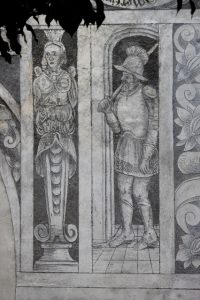 sgraffito on the facade of one of the Slavonice houses

Moving into Moravia, Czech Republic’s eastern region, we enjoy the medieval square and palace of Telc and sgraffitoed Slavonice, as well as the mostly ruined Landstejn castle. The weather doesn’t help, today.

It is time to move further east, towards Moravia, that other half of the Czech Republic. Unfortunately, it is not a good day for pictures, it is largely overcast and occasional rain. 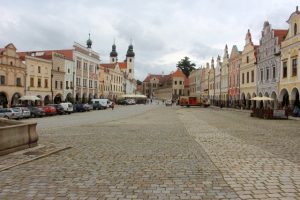 the square in Telc, with at the far end the palace 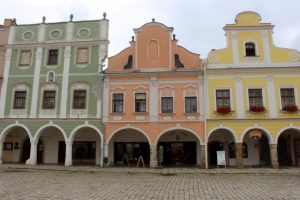 three of the pastel-coloured houses 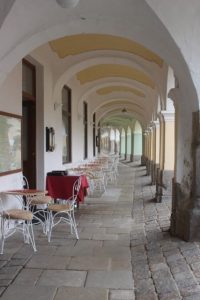 almost the entire square has an arcade around it

Telc is perhaps one of the most authentic medieval towns in the country. 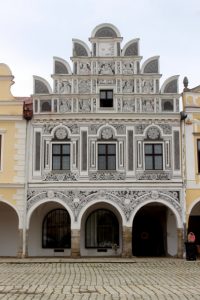 the house of the former mayor 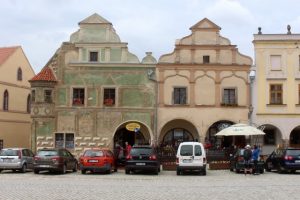 the house on number 15, to the left 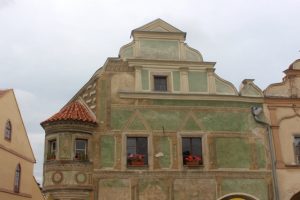 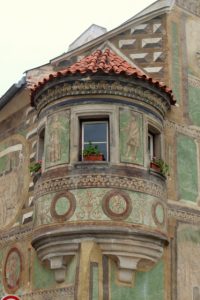 and a fabulous round room in the corner

Our first stop is Telc, another wonderful medieval settlement. The town was lucky enough to have been stuck by fire in 1530, which burnt down all the town’s wooden houses. Since nothing else ever happened to the town, the subsequent rebuilt has resulted in the perfect 16th Century open air museum, sporting a fabulous large square with – indeed – the usual pastel-coloured houses with a variety of facades, gables and colours, and a covered arcade all around. There are probably some 70-80 houses around the square, each no doubt with their own unique history; the town’s tourist brochure highlights several, amongst them the remarkable house nr 15, decorated with striking green sgraffito, and house nr 61, the house of the former mayor (in 1532!), with an unusual gable and white-grey sgraffito of Old Testament scenes.

and a whole lot of other houses 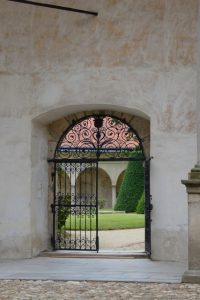 gate to one of the palace courtyards 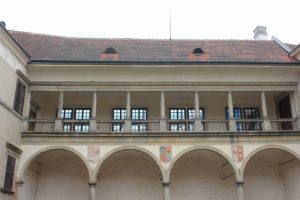 gallery around the palace entrance 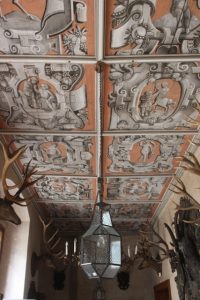 ceiling in one of the palace corridors 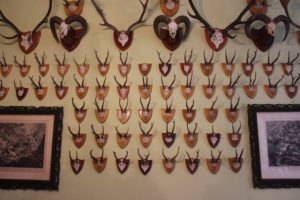 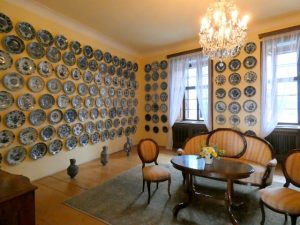 Because of the miserable weather, this is the day to visit the inside of a palace, of which Telc has one, too – of course, every medieval town has one. We succumb to a Czech language guide tour, for which we get a English hand-out to read when the guide is talking. We are being taken through the private quarters of the old nobility, who had an obsession with hunting, it seems, and with collecting Delft Blue plates. The more interesting parts of the castle, including the banqueting halls with, apparently, exquisite wooden ceilings, were closed because of renovation. 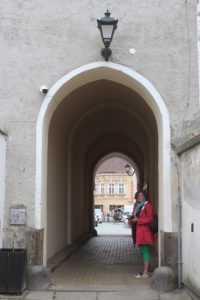 the entrance to the square of Slavonice, full of tourists again 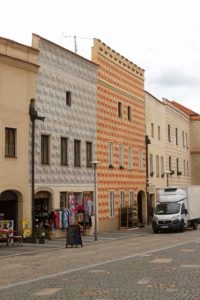 many of the houses in Slavonice have been painted with blocks 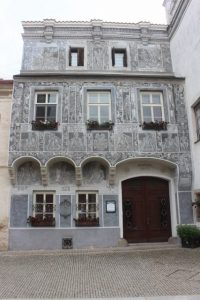 yet, quite a few still retain the sgraffito 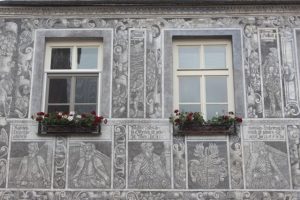 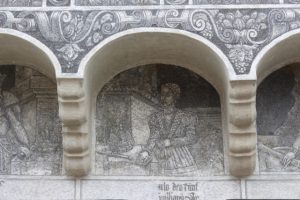 of a range of subject matter 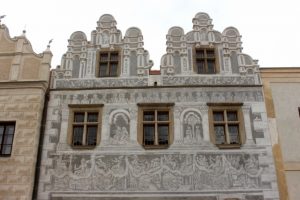 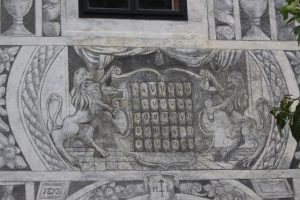 and a family weapon

Slavonice may not be what it used to be, but still shows lots of sgraffito.

Slavonice, which was billed as a continuous story in sgrafitto, was in a bit of a disappointment. Perhaps my guide book of 15 years is too old, but the images were only present at some of the houses around the square, or rather, the two squares. Lots of houses seem to have been redone with painting of building blocks on the façade, something we have seen before, but not something to justify a detour. Perhaps I am too negative: there were quite a few sgraffitoed house, too, and many of the images were strikingly detailed, it just didn’t meet the sky-high expectation. Or maybe it was the weather, which was still dismal.

there is a whole story, here 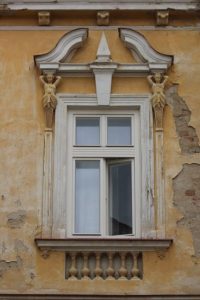 not all is sgraffito in Slavonice 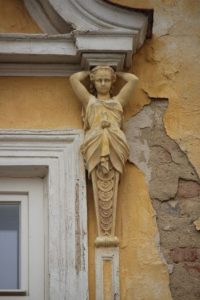 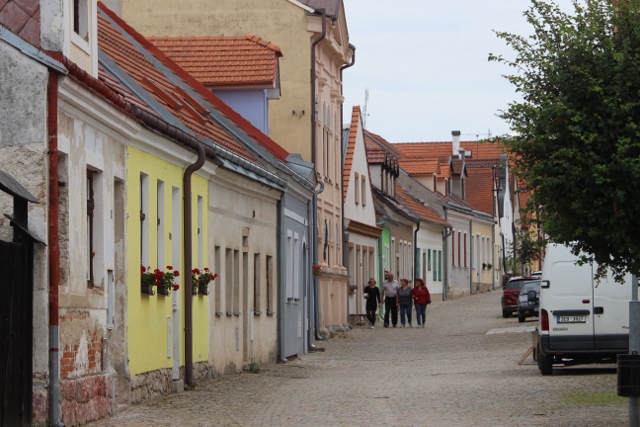 and a back street, simpler houses but equally pastel-coloured 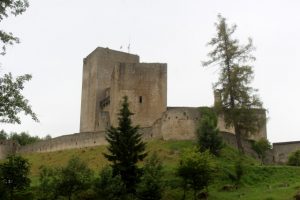 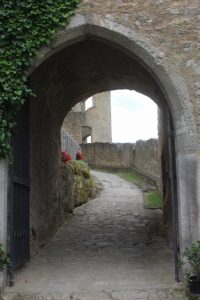 with a true castle entrance 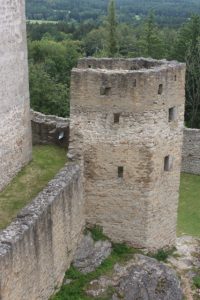 and thick walls, and towers

The impressive Landstejn Castle, and the more recent military bunkers, illustrate that for hundreds of years defence was the thing, so close to the border with Austria and Germany.

Half an hour outside Slavonice is the Landstejn Castle. There is no lack of castles in the Czech Republic, but this one is unique because it originates from the 14th century, but has NOT been rebuilt in baroque or Renaissance style to suit the tastes of the landlords of the time. So it is largely a ruin, although the elements of a real castle, like thick walls and a high, dominating tower, are still present, and are only now being restored, somewhat. No need for a guided tour, you can just wander around by yourself. Which is, of course, what many of the local tourists did, too: this concept of a tourist-free Czech Republic because of Corona is not working everywhere.

What the guidebooks didn’t mention, where the several 20th Century military bunkers that are visible in this area. Nothing like Albania, but still, a feature reminding you that this was, not so long ago – and it is easy to forget, so traveling through a free and rather prosperous country -, the impenetrable border between the East Block and NATO. Alas, the bunkers have been painted a bit to make them look less threatening.

next: the wine area around Valtice 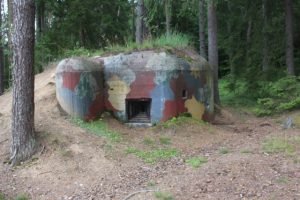 this could still be camouflage 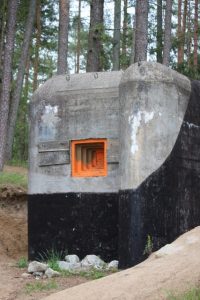 but this bunker has been clearly jolly-fied 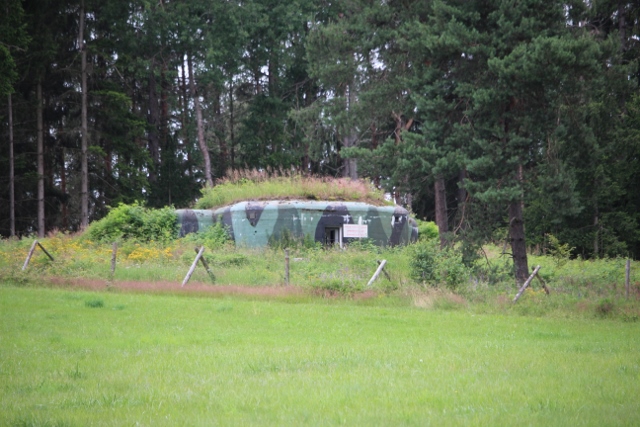 another bunker, this one out of bounds for the tourists