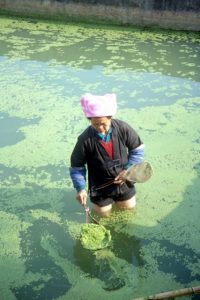 a village woman harvesting weed from a pond in Jipin, near Longsheng

A rather Spartan hotel, wooden minority villages and spectacular rice terraces in the area around Longsheng.

After our last comfortable night in Guilin, and a decent meal in the local top restaurant, we were ready for the rest of our trip, no doubt a lot rougher, through the remote territory to Guiyang. Next day we left early, by bus to Longsheng. As the only available bus was a sleeper bus, we were transported horizontally for four hours, not at all uncomfortable apart from the collective smell of feet from all other passengers, who had taken off their shoes. It was either this, or the icy early morning wind through the open window: we opted for the latter. 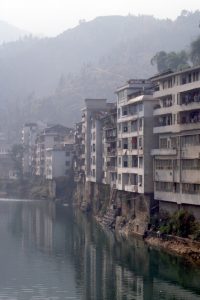 apartment buildings along the river in Longsheng

Around lunchtime we unfolded ourselves again, in the small town of Longsheng, and booked ourselves in the ‘English Spoken’ Riverside Hotel. A pretty basic outfit, but with very friendly, and indeed English speaking, staff, all related to the owner, who also happened to be the town’s English teacher. Our room, with a view over the river, was rather Spartan, with three hard wooden beds, a bulb at the ceiling, and nothing else. Outside, on the balcony, was the bathroom. The washing basin was a plastic bucket, and for the rest there was a shower and a hole in the ground. The name of the hotel, Riverside, leaves no doubt about the direction of the sewerage. 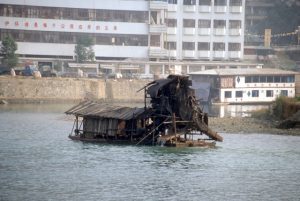 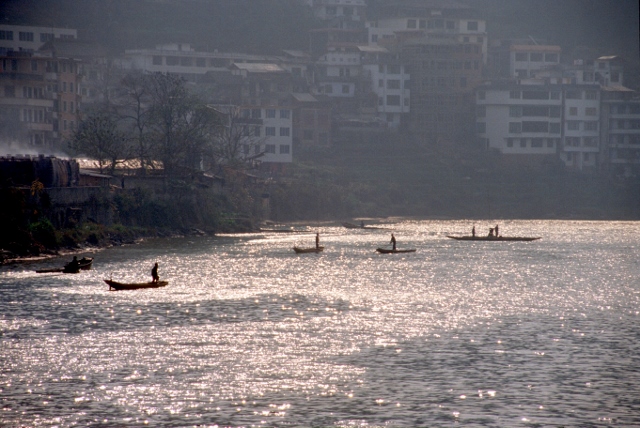 fishing canoes in the evening light 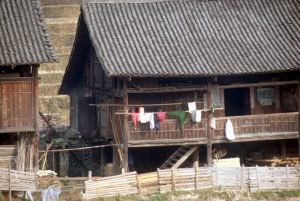 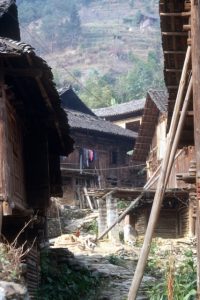 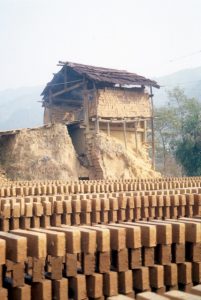 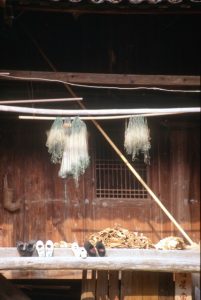 nets drying on the veranda 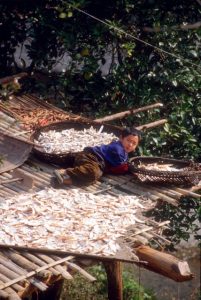 roots drying in the sun, guarded by the family’s youngest

A two hour walk along the river brought us to some typical, wooden villages of Dong minority origin, which turned out to be very nice indeed. Beautifully constructed, dark wooden houses, some with a stone base. Colourful laundry was drying in the sun, together with peppers, roots, root chippings and some form of large cabbage or lettuce. However, progress is also on its way, and wood is quickly being replaced by bricks. Canoes on the river are digging for mud – some more entrepreneurial characters have even constructed real dredging machines, rusty, but busily sucking affairs– and the banks near the town are full of brick ovens. The end result was particularly conspicuous in one nearby village.

We also encountered our first Dong bridge, a large wooden structure on concrete or rock pillars, with a pointed roof. This one was specifically built for tourists, with nothing else in the neighbourhood than a distant waterfall, with little water. As always, tourist spots command entry fees, and a sign clearly pointed out either 40 Yuan, or 10 Yuan, the rest of the text was in Chinese. So we were asked 20 each, another mystery. 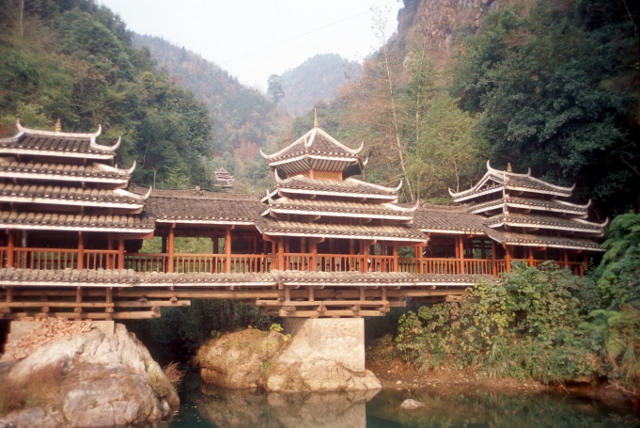 The hotel occupancy was very disappointing, in that there were no less than 13 foreigners. And we thought we were off the beaten track! What was worse, 7 out of 13 were Dutch – it was indeed an incredibly cheap hotel. One pays per bed, not per room, the total of 20 Yuan, not yet US$ 3, including a copious dinner, beer and coffee. And our spacious room could easily have slept three people for the night! Well, sleep was another matter, actually, as our hotel accomodated quite a lot of Chinese, too, who, as always, will keep on talking in very loud voice, preferably with all the doors open, until late at night. Our plan, to take revenge early morning, as we had to leave before 8, failed: they were up by six, and we knew it right away. 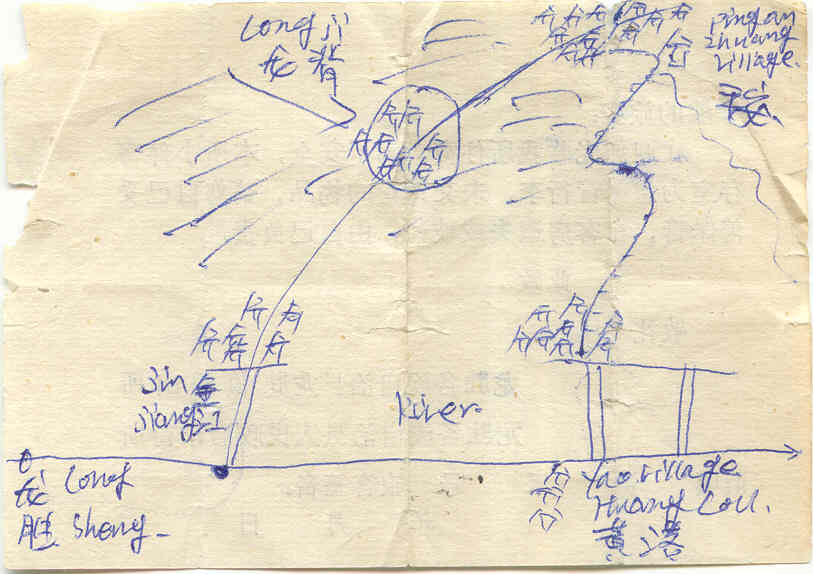 the map of the Long Ji area, drawn by the friendly hotel owner; you cannot miss it, really, piece of cake! 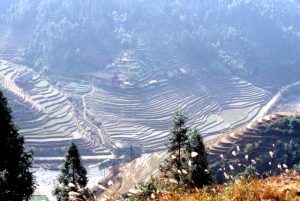 the rice paddy scene near Jongji

The reason to come to Longsheng is a visit to the rice terraces, a truly incredible sight around the village of Longji, about an hour by bus from Longsheng. Armed with a detailed hand-drawn map from our friendly hotel family, we got out at one village; after having bought a ticket (remember, anything touristic in China?), and after haggling with half of the village women, who all wanted to show us the way, for a price, we just started walking up the hill. No need for a guide, the path cum stairs was well maintained, and pretty obvious. The only signs of others having preceded us on the track was the rubbish, on either side, but even this was, for Chinese standards, not too bad. But a climb it was, although well worth every step. Each time we reached higher the view became even more spectacular, terraces as far as the eye could see. Near the top we reached a small, simple Dong bridge, before entering the village of Zhuang. And this was a whole new experience again, the village almost entirely made up of wooden houses, fairly densely packed together, with narrow, but well maintained paths in between. Every turning of a corner was another delight, either being confronted with bright yellow corn cobs drying in the sun, or with a group of traditionally dressed women carrying their buckets. Definitively authentic. We spent far too much time in the village, and we still had a good two hour walk back to the road. In the end we had to hurry along the path, though the village of Longji, another gem, and down the hill, sometimes right through the rice paddies, to the village of Jin, where we just managed to stop the last bus back to Longsheng. 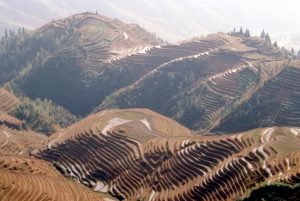 terraced paddies as far as one can see 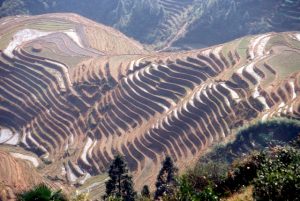 filled with water, ahead of the growing season 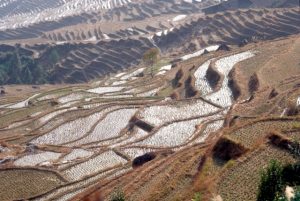 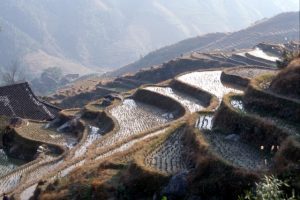 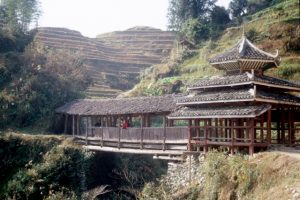 Dong bridge just before the village of Jipin 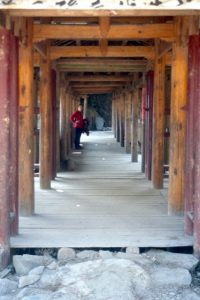 inside the bridge, including the usual haphazerd tourist 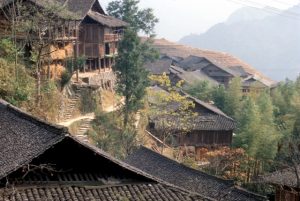 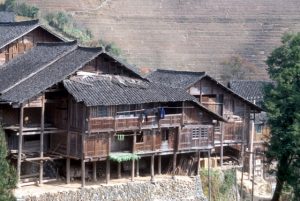 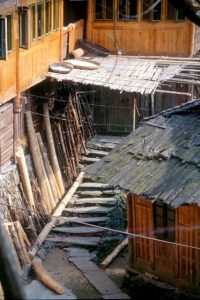 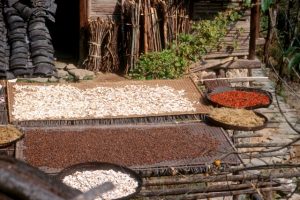 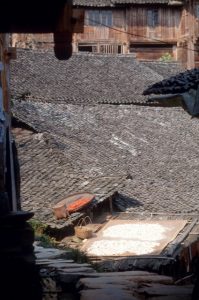 chillies and roots drying on a roof 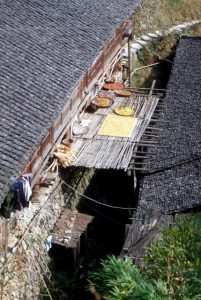 platform specially constructed across the alley, for drying products 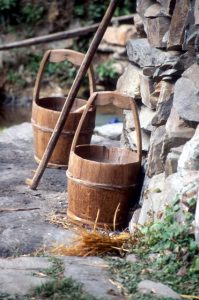 milk baskets along the path 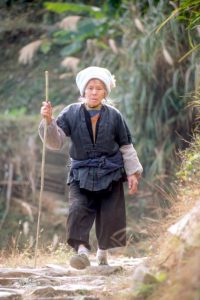 one of the village women 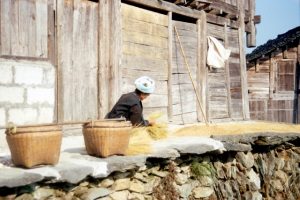 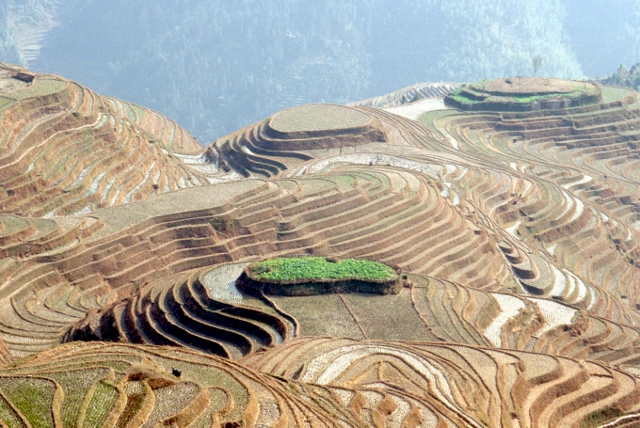 some of the terraces are being used for other crops