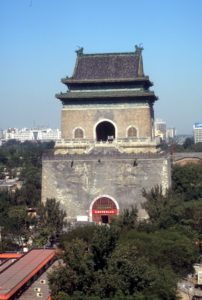 Our first visit to Beijing was in January 1995, on our honeymoon! It was freezing cold. Two years later, we moved to Beijing for work, and spent three years in this most exciting city. I have noted down some memories of that time, and I have collected a couple of photographs from the main sites, also late 1990’s. I imagine things have changed quite a lot, since then; I saw that to descent the Chinese Wall at Mutianyu a toboggan has been installed, to name just one.

Do note that the photos are scanned slides, and that some of them were scanned after some discolouration had occurred. 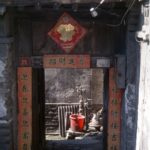 We lived a good three years in Beijing, from early 1997 to early 2000, and good years they were. From our comfortable apartment, just inside the Third Ringroad, it was walking distance to my office, and to the nearby restaurants and supermarkets, and a short taxi ride anywhere into town. The first time we went into town, we actually walked: our city map showed that it was only a few blocks to Tiananmen Square. Right! Blocks are huge, in Beijing, and in the end it took us close to an hour to get there. The first indication that everything in China is just an order of magnitude bigger…. 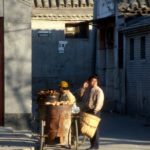 Beijing is one of those places with four distinct seasons. My favourite would be spring time, the nicest period in town, closely followed by autumn: pleasant temperatures, blue skies – or what get closest to blue, in one of the most polluted cities of the world. Summer could get very hot. Opposite our apartment would be one of those neon light boards recording the current temperature, which regularly hit the 39.9 oC. Never more, because at 40 the government was, apparently, obliged to close offices and factories and send all workers home. 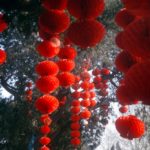 China does not celebrate many Public Holidays, but the country, and Beijing, closes down for the Spring Festival, the Chinese New Year. This is the time for new cloths, and for family visits, no matter where they have to travel to. Quite a challenge for the local transport systems, especially airlines and trains. The railways announced that on one day alone, the Monday after the holiday, they transported 4.28 million people, and I believe them. (Have I commented earlier on the fact that everything in China happens an order of magnitude different from what we are used to?) The other Spring Festival element is eating and drinking, either at home with the family, or in one of the many parks that have been decorated for the occasion, with red lampions, and fitted out with numerous stalls selling dumplings. 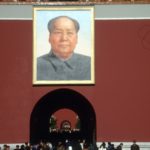 Beijing: Forbidden City: Long considered the centre of the universe, Beijing’s Forbidden City is one of the great monuments of dynastic China.

What is popularly known as the Forbidden City is, in reality, the Imperial Palace, the residence for 25 generations of Ming and Qing emperors. Created at the beginning of the 15th Century, the present palace has been very well restored. In spite of its particularly un-Communistic credentials, pragmatism towards the spoils of the many tourists trumps the ideological purity. 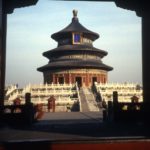 The Temple of Heaven is not just a temple, it is perhaps the largest community centre in China. Best time to visit, early morning, is also the time that the grounds of the temple complex are filled with Chinese exercising their daily Tai Chi. Inside the complex, many of the local people are sitting in the corridors leading to the several buildings, talking, drinking tea, showing off their birds in little cages, or just reading the paper. 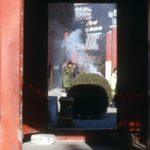 Beijing: Buddhist Temples: Some of my favourite temples in Beijing were the Lama Temple and the Five Pagoda Temple, great retreats from the always-busy city.

At the end of the 1990s there were lots of active Buddhist temples in Beijing, somehow the Communist Party never managed to stamp out religion entirely. Lots of Chinese people would visit a temple, big or small, and pray, lit a candle – well, incense sticks, really – or just sit and appreciate the peaceful atmosphere. 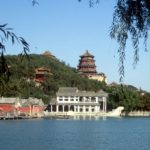 Beijing: Summer Palace: The Summer Palace outside Beijing is not just a building, but a great park and lake complex ideal for an afternoon, or a whole day, out.

Just outside Beijing is what is known as the Summer Palace – Yiheyuan, in Chinese -, in fact a large complex of park and lake, with on one side of the lake the imperial retreat, a collection of wooden buildings built at the end of the 19th Century. Although the location has seen earlier palaces, the current building is mostly the initiative of the Empress Dowager Cixi, who brought the empire to the brink of collapse. 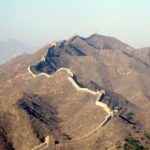 No travel website that mentions China can get away without mentioning the Great Wall. I have been in quite a few cities that claim to have the second longest wall in the world, but there is never a doubt which one is the longest, some 6000 km along China’s north.