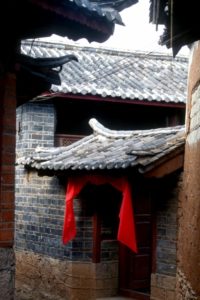 a house in Lijang

Lijang, too, is entirely focused on tourists, and so are many of the surrounding villages, where Chinese minorities form the majority.

The road to Lijiang, some 130 km north of Dali, shows a quickly changing landscape, from the fertile agricultural plains around the lake to the grassy, yellow hills with not much more than low scrub as vegetation. Here no people live, on the contrary, the dead are buried here, evidenced by graves on all sides of the road. However, further on life, and colour, returned again, with terraced fields flanking river valleys, sturdy villages build against the lower ranges of the mountain slopes and the occasional herd of goats, flanked by a cow or two, crossing the road. 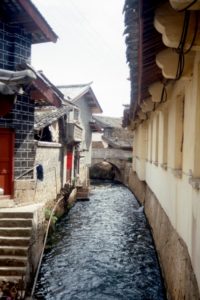 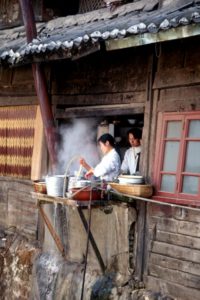 a restaurant’s kitchen along the canal 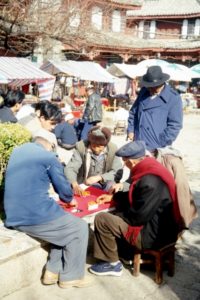 Siping Square, the centre of Lijang 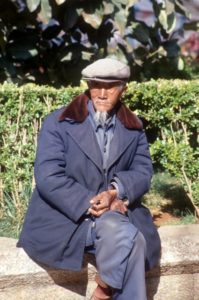 one of the inhabitants 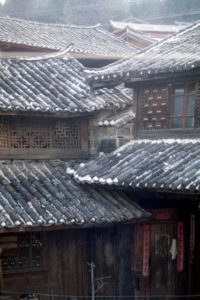 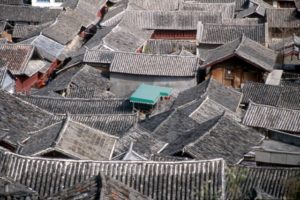 Lijang roofs from above

Lijiang turned out to be even more touristic than Dali. Hailed as the Venice of the Orient – as so many other places in China, by the way -, it really is not more than a couple of streets with one or two streams running through it. The streams are mainly crossed by planks, and only occasionally there is a small arched bridge built over it. The main town centre is heavily restored, and nicely decorated with hundreds of flower pots, yet there is little authenticity left here. Shops sell touristic souvenirs, and the Siping square in the centre of town has a market with antiques only, Chinese antiques that is, but without the usual clementines, apples, and other fruit and vegetables that any self-respecting Chinese market puts on display. It is only outside the central part of town that one finds the real village atmosphere back, cobbled streets, corner shops and genuine courtyards. Tourism also brings modernity, and today only the middle aged and elderly sport the traditional Naxi dress, the young are too cool for this. 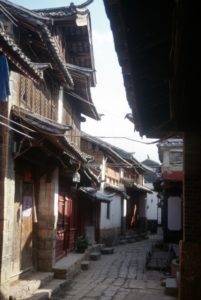 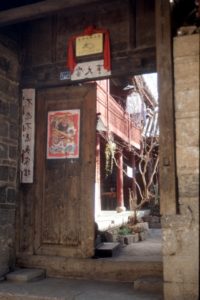 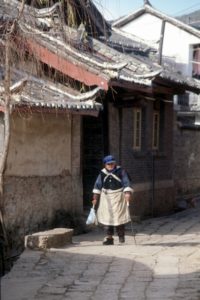 woman coming home in the suburbs 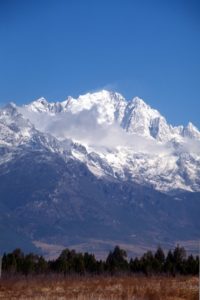 To get away from it all, we decided to visit Baisha, according to our three year old guide book a small, unspoiled village north of Lijiang, reachable by dirt track only. No way! Tarmac now leads all the way to the village, where one is greeted by a hefty parking fee for our taxi, and a tourist circuit lined with the usual souvenir stalls leading to the main attraction, the museum. But yet again, away from the centre life takes its normal form again, and strolling through the village outskirts, complete with its rural entourage of pigs, chicken and cows, was really nice. Things got even better in Yulong, the next village north of Baisha, and in Yuhe, which was not yet spoilt by tourism, and which took us considerably more time to find. No tarmac here, at least. 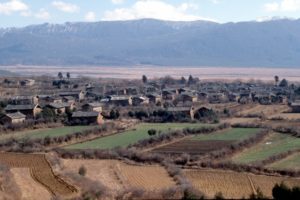 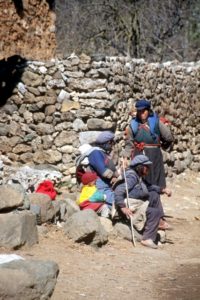 the women of Yulong

The afternoon we spent in the local park in Lijiang, very Chinese again, with a pond and arched wooden bridges, temple-like buildings and its main attraction, a performance by the Naxi orchestra. This was a group of mainly old men and young girls playing the traditional music, definitely on period instruments. Quite nice, although somewhat repetitive after a while. Before returning to Kunming by plane, we did manage to find the real market in town, with its usual cacophony of colours. Especially the green-white baskets, typical for this area and used to carry whatever you can think of on your back, were prominently on display. a man in the pavilion 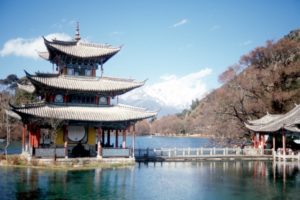 Deyue pavilion, in the park in Lijang 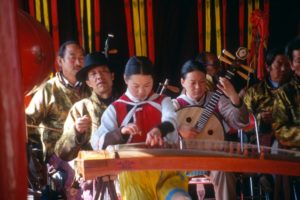 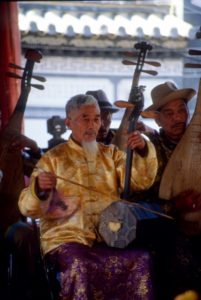 and a Naxi soloist