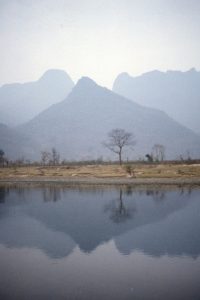 karst mountains near Guilin, mirroring in the Li River

One of China’s premier tourist spots, on account of the beautiful karst landscape along the Li River.

It is a good three hours flight from Beijing to the Chinese tourist Mecca of Guilin. Yet, strangely enough, Guilin does not have this air of a modern Chinese town that so often accompanies the development related to tourist wealth. On the contrary, it has, at least for the time being, this feel of 60’s-70’s communism; relatively low, square buildings, non-committal, the architects were definitely not inspired by the river and karst landscape that makes Guilin so famous. However, as everywhere else, development is around the corner. The entire road network in town, every street and junction, was broken up at the same time, for a new sewerage system or whatever, resulting in a complete chaos. The centre of town was one big hole. Walking on the uneven sandy stretches was difficult, but this did not stop any of the vendors from getting on with their business, and in the middle of the chaos you could still find plenty of people selling shish kebab, saté, shoes and children’s toys. 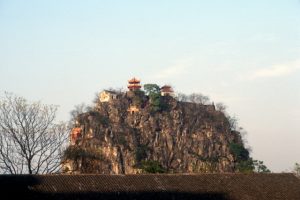 some of the karst mountains host Buddhist temples, like this famous Elephant Trunk Hill 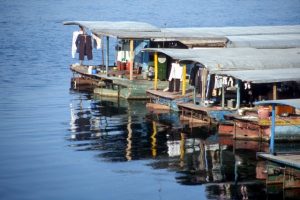 plenty of boats available on the Li River 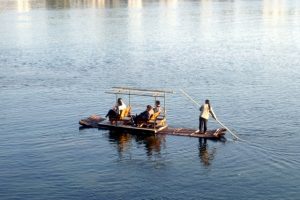 A trip on the Li River, in between the irregularly shaped hills of China’s premier karst landscape, has inspired many a Chinese poet and painter, but this was presumably before the boatloads of tourists, Chinese and foreign alike, discovered this same stretch of water. Tours were leaving some 30 kms downstream from Guilin, due to the low water level. The wharf from where the boats depart is something special in itself, hundreds of tourists are pushed through hundreds of souvenir stalls, whose sellers have, presumably, only an hour per day, between 9-10, to press their business upon the innocent passers-by. Our boat left at 9.30, and served tea and lunch before arriving at Yanshao at around two in the afternoon. Having done the trip before, we were actually less than impressed, which was no doubt at least partly influenced by the poor weather. 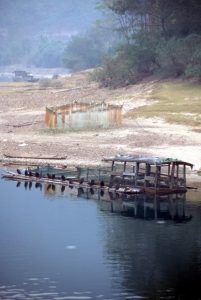 cormorants are being used for fishing, as are the nets 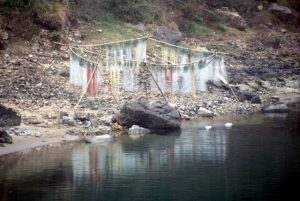 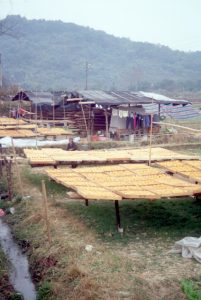 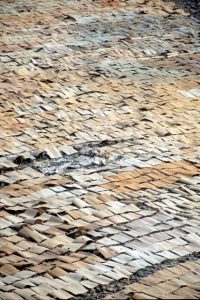 Yanshao is described in the guidebooks as a peaceful, quiet village that has escaped the curse of tourism that has so obviously affected the rest of the area. Right! Guidebook is outdated, Yanshao is actually the second big souvenir market, street after street – which you have to walk through on your way to the bus, back to Guilin.

The road back featured just one highlight: pomelo season. Everywhere mountains of huge, yellow pomelos were stacked, along the roads, in market stalls, in garages, wherever one looks. And occasionally these were replaced by trays of drying quinces, a very colourful sight which would have been even more spectacular had the sun shone.

Next: to Longsheng and the rice terraces