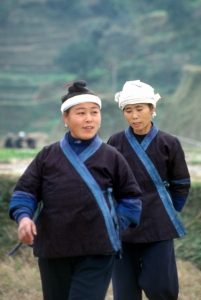 two women in a village outside Tongle

A journey full of problems, and full of spectacular views, to the surprisingly unhelpful village of Tongle.

We were supposed to meet Mr. Li, the director of the local travel agency, at six pm, but he was not in his office, so we left again, telling his secretary that we would be in the hotel. Typical, yet another one of those Chinese who felt so powerful as director, that he could ignore appointments. That, however, proved to be wrong. Mr. Li turned up half an hour later in our hotel, stumbling into our room, obviously drunk, and all apologetic, because he had been drinking with friends, you see, and that was why he was late. We could smell that, too. We were so taken by his honesty, that we arranged our tour for the next morning with him, anyhow.

Mistake again. Next day Mr. Li turned up half an hour late again, albeit sober this time. The car was a small minivan with dark, but really dark, windows, difficult to enjoy any view unless you were prepared to freeze to death next to the open window. Seats were really uncomfortable for tall westerners like us, with our knees folded against the dashboard in the front, and our heads were firmly squeezed against the ceiling in the back. Within 500 m Mr. Li started to pick up other passengers, as if this would improve our comfort, and he was really offended when we explained to him that we had rented his car for our exclusive use, this day. At the next stop, the service station where the driver intended to fuel up, but obviously only after his lengthy chat with his buddy, no doubt about these silly tourists who did not let him pick up passengers, we decided that this was not going to work, and we cancelled our tour. Mistake again, as it turned out. 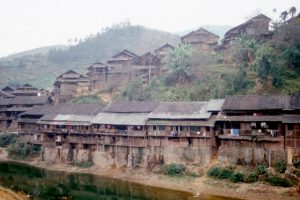 We now had to change the plan, and make our own way to the remote villages further west. After all, we had traveled before, we knew the business. We took the local bus to Tongle, in the next valley, only to find out that this side of Sanjiang didn’t have any tarmac. (It was not before another few days that we would return to this more comfortable road surface again.) But the way to Tongle was beautiful, especially once we turned off the ‘main’ road into the Meng Valley, full of small wooden villages high up in the mountains, and in the valley itself. Tongle turned out to be a slightly bigger village, but only just. However, where we had in the past few days experienced the warmth and the friendliness of the local people, here the people were the opposite. In the village square we got off the bus, with all our luggage on our back, and the bus driver pointed up the hill, in answer to our enquiry to where the hotel was. So we walked up the hill, only to be overtaken by the same bus, just minutes later. Thanks! Still no sign of hotel, but when we asked around, two people pointed helpfully in two different directions. Right! There were two hotels! The one closest, indeed up the hill, claimed he was full, never mind the scores of empty rooms. So we headed to the other hotel, which turned out to be back at the village square, right opposite where the bus driver had dropped us off in the first place. 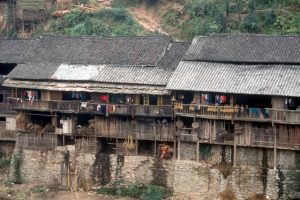 some of the Tongle houses, and balconies 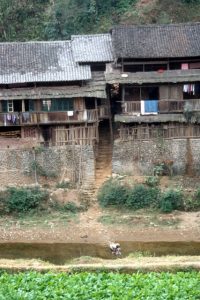 Well, hotel is maybe too optimistic a description. I thought we had slept on hard beds before, but nothing compared to the Spartan condition we encountered here. But what can one expect, for just one dollar a night, which is probably twice the real price, anyhow, because foreigners still get charged double in many places. Yet, they did their best to make us feel in a real Chinese hotel, complete with hot, well, warm water, some tea leaves, and candles for the night. Night comes early, here, essentially when it gets dark and the village shuts down. Long nights are generally alright, but on a plank it is a different matter, not the most comfortable one. 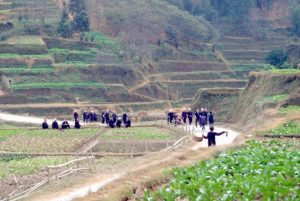 women’s power, a procession of women on their way to the village 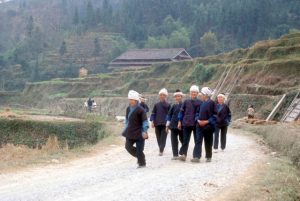 all in good spirits, but I don’t know what was the occasion 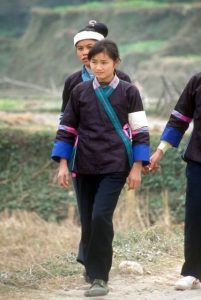 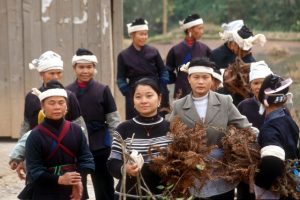 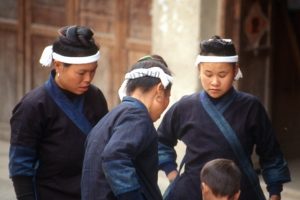 three of the women of the group

The afternoon in the village had been a mixed success. We first tried to get further up the valley, with one of the converted tractors that serve as Dong taxis. Problem was that nobody wanted to tell us what in direction we had to go, and when we finally found out, none of the taxis were prepared to take us. Still beats me why not! So, frustrated, we decided to further explore Tongle, which turned out to be not too bad after all. We stumbled upon a procession of traditionally dressed women and girls, accompanied by music, who came back from whatever it was they had done in the fields; we were invited in one of the large wooden homes, where we spotted this old wooden pram for which we only didn’t make a bid on the spot because there was actually a baby inside; and we were fed local peanuts. Not much more to ask for!