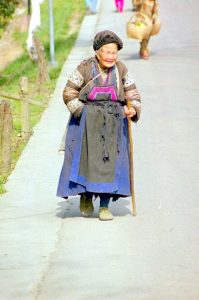 an old woman in Anshun, on the way to Guiyang

The last stretch, to Guiyang, goes past Anshun and its tourist attractions, and once more many different minority people.

Guiyang could be reached by train, so we treasured the change, initially. But the line was single track, and we were confronted with long waits at stations, for trains from the opposite direction. It was now snowing, which did not help the train traffic, nor the temperature development in the unheated carriage. So for the next leg, to Anshun, our last target, we changed back to bus again.

Anshun is famous for its Huangguoshu waterfalls, and for the Longgong caves, all within easy reach of the town. At both the waterfall and the caves, most of the space is actually taken up by the souvenir stalls. At the caves it was not too bad, as we were early, and the only tourists. And once we passed the stalls, drifting to the tackily illuminated caves was actually quite pleasant, despite the lights and the disturbing signs indicating the names of various rock formations, like ‘beautiful waterfall’, ‘group of monkeys’, ‘adoring the moon’, or ‘three-headed dragon in the bathtub’. At the falls, the merchants were worse, more persistent. The path down actually leads right through two stores, one cannot avoid these. Quite a few of the stalls were closed, so imaging the situation in high season! The falls themselves were impressive, although there was clearly not much water, this time around. At various spots, also very Chinese-like, one can have one’s photo taken with the falls in the back, either together with a dressed-up Miao girl, or oneself dressed as a Miao, complete with woven basket and plastic flowers! 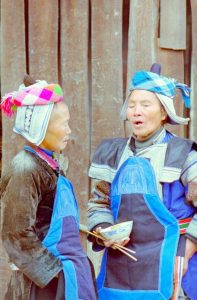 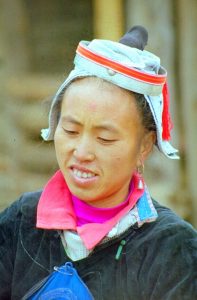 a minority woman in close-up 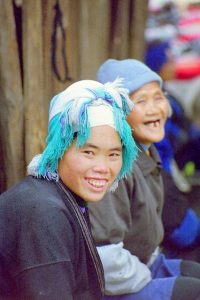 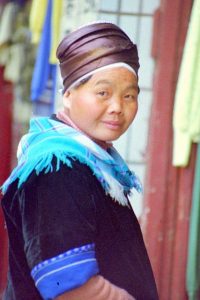 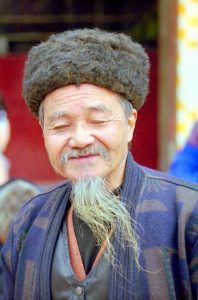 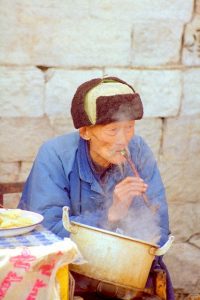 In Anshun itself we found an unexpected gem in the form of the Wen Miao, a 600 years old Confucian academy cum temple, a beautiful little building, although seriously in decline. And that whilst nearby a new, horrible temple had been built, with outrageous Buddha sculptures, brightly painted decorations and colourful pillars, completely out of tune. This is probably the clearest example of Chinese having different values and tastes, as any Westerner would have restored the old temple, instead. The area around the two temples is full of narrow streets, old wooden houses, nicely worked windows and balconies, but generally dilapidated, falling apart. A filthy little stream winds through the neighbourhood, and there is rubbish everywhere. Eating stalls prominently display roasted dogs, with their tails upright, and the market is everywhere. A chaos, but so Chinese, so characteristic, and so good humoured, with such a friendly atmosphere. And everybody is curious about those foreigners, you couldn’t buy anything without attracting a large crowd around you and the little stall you are buying from. 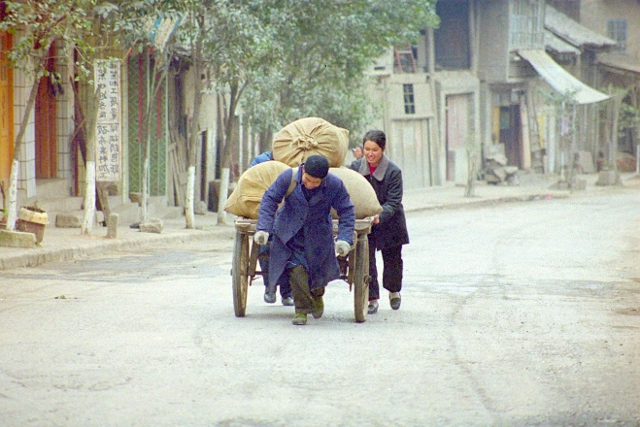 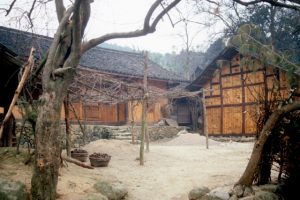 wooden houses in a village on the way

Driving back to Guiyang, the end point of our trip, we appreciated the country side much more than earlier in the snow, as now the sun was back. Limestone hills as far as one could see, with green rice terraces in between, and white-gray stone villages. Interestingly, against almost each hill a cemetery was built in the lower ranges, with all graves facing the same direction, generally south and west. 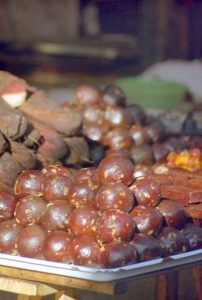 sweets in the market Guiyang is a fairly large town, for some reason with a worse traffic chaos than in any other Chinese town I have visited. Perhaps the many car collisions have something to do with it, or the undisciplined driving style. The highlight of the town is the flower and pet market, with bowls and basins full of goldfish, and any other sort of coloured fish you can imagine, with cages full of colourful songbirds, and with baskets full of fluffy and cuddly puppies, ready to grow up into the typically ugly village dogs they have around here. The flower market refers both to real plants, and the plastic version, complete with decorative stones, pots, wood sculptures and ‘true’ fossils, like the imprint of a mother and baby salamander that one finds all over China. The presence of a little Buddhist temple, tucked away behind the market street, was only evident from the incense stalls that suddenly started to appear. Close to the market, at the other side of the river, is the Tailu complex, an old Guiyang institution that houses, amongst others, a shop with a wonderful collection of embroidered minority cloths, but at prices that makes even the most fancy Beijing antique shop pale in comparison.

In contrast to the countryside so close by, Guiyang does have a modern appearance, with department stores, fly-overs, even a small airport, from where we flew back, via Shanghai, to Beijing. Here plenty of Coke available, plenty of modern cloths as opposed to the coulorful minority dresses we saw everywhere else. However, behind the facade the old wooden houses still exist, and the relativity of progress is demonstrated by the presence of horse-drawn carts on the airport express way. 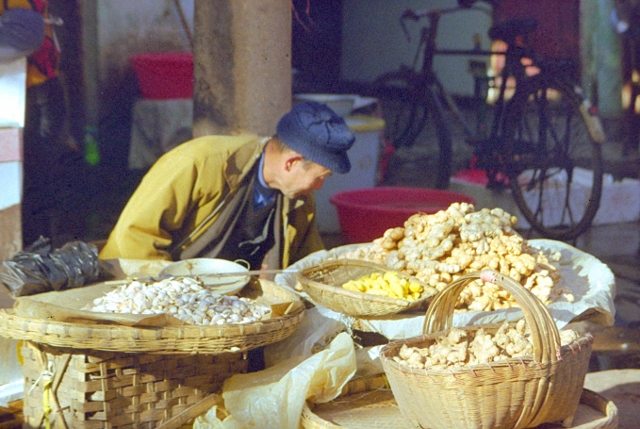