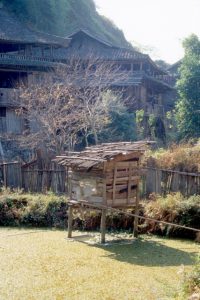 the outhouse over the pond, in Changyang near the town of Sanjiang

The pleasant market town of Sanjiang contrasts somewhat with the model Dong-village of Chengyang and its bridges.

The following day we took the bus to Sanjiang, our next target. Although the bus left at 8 in the morning, it took another 20 minutes of driving around to fill up with sufficient passengers to make the trip worthwhile for the driver. At one point some 10 passengers got off again, leaving all their belongings on the bus. Two minutes later the bus stopped at what looked like a checkpoint, where passenger lists were reviewed and checked against people on board, all duly found in order. And the bus drove on, only to stop another 200 m further, where the 10 who left earlier got back on board. Make of this whatever you like.

In the winter the mist in between the mountains doesn’t clear until 10 in the morning, so the first two hours of our trip were freezing cold. Windows in Chinese busses do not necessarily close. Beautiful landscape, though, and again plenty of wooden villages and bridges dotted around.

The Sanjiang Government Guesthouse was clearly a level up from the day before. As foreigners, we were proudly given a room in the new wing, unfortunately next to the noisy road. But what a bathroom! Perhaps not the finishing of a Hilton or Sheraton, and the toilet was still a hole in the ground, but the plumbing was superb, the best shower I ever had in China. Truly HPHT. 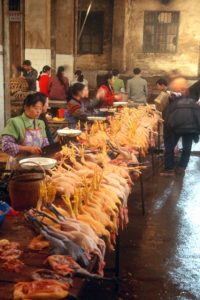 hundreds of chicken, feet up 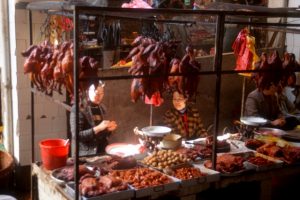 roasted duck and other meat delicacies 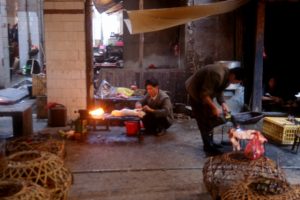 We spent an hour or so in town, nothing special, no specific sights, but it was just the atmosphere which makes this yet another Chinese experience. A bustling, friendly chaos, it felt great to walk around without any purpose. The local market, and especially the duck section, was a delight. At one end of the hall one finds baskets full of live ducks, halfway the hall there are large tables with literally hundreds of skinned ducks, feet in the air, and at the far end you can buy your roasted duck. And in the meantime there are countless other attractions, unbelievable mushrooms, both in size and form, carrots the size of an underarm, and rows and rows of Chinese cabbage, clearly the dominant staple in Sanjiang. One of the isles in between the stalls was full of live fish, with customers selecting bag-fulls by themselves, in another corner a series of pig snouts and, yes indeed, a dog was being roasted. People dressed in their traditional clothing – mainly the blue and indigo of the Dong, carrying a bamboo pole on their shoulders, with heavy baskets on each side. 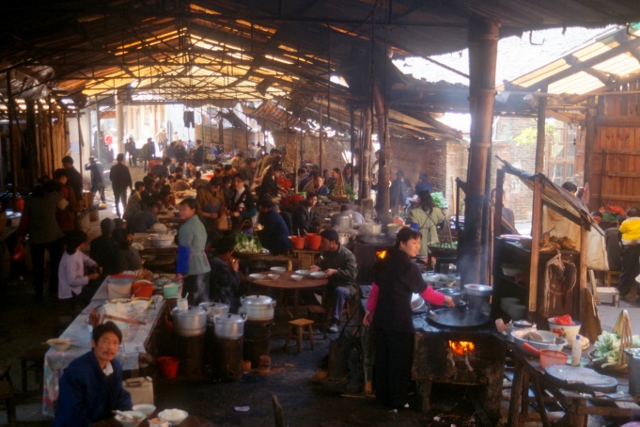 restaurant section of the Sanjiang market 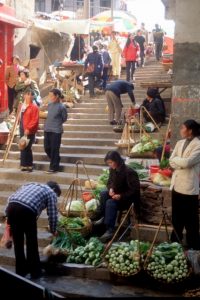 vegetable market on the stairs 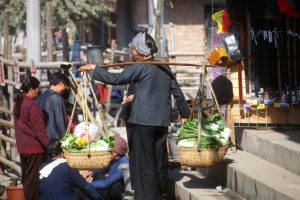 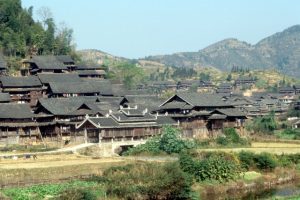 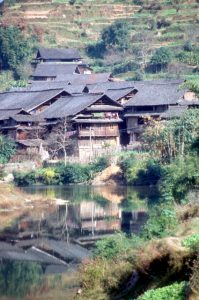 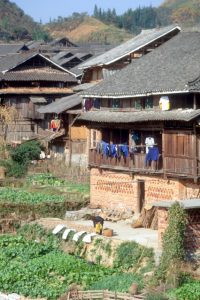 many with brick bases: modernity!

The tourist attraction, complete with entry fee, for sure!, is Changyang, a model Dong village. It actually consists of a number of hamlets along the river, connected by bridges, perhaps four or five of them, all build in the typical Dong way. The riverbanks were dotted with numerous wooden and metal waterwheels, in all sizes, irrigating the rice paddies. Nice again, but clearly not as authentic as the villages we visited the day before on the rice terraces of Longji. Near the entrance we found many women, mostly older, selling souvenirs, including the local embroidery. Once they realised that we were quite impressed with some of those cloths, they brought down their entire attics, probably every piece of embroidery they had in the village. Things were so cheap that we felt too embarrassed to bargain hard, and as usual we bought far too much, and felt happy about it. And the women were clearly very content, too. I suppose that there are not many foreigners coming all the way, and those who do are mainly backpackers, who do not spent the money. 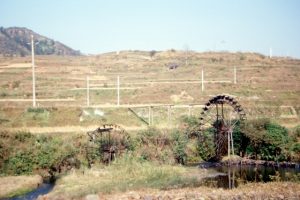 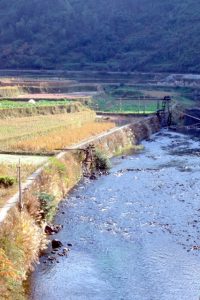 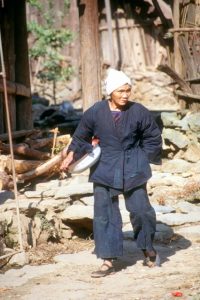 woman in the typical Dong outfit 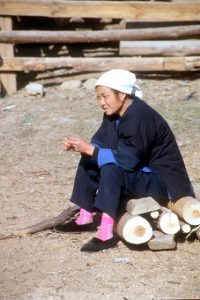 and another woman, equally Dong 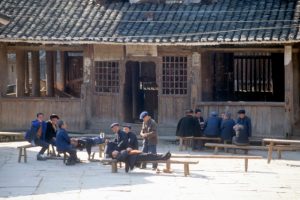 the stressful life of the men of the village 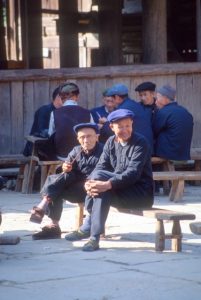 Back in Sanjiang we actually found even more embroideries, in the local shop. Again, the price was so cheap that we decided to offer half of the asking price, instead of the customary quarter. Obviously a mistake, there was not even a hint of negotiation on the Chinese side, which is usually a sign of paying far too much. Never mind, both parties were happy. 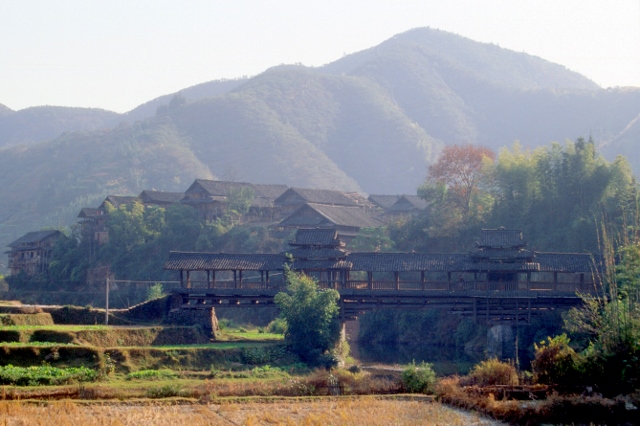 another view of the village, and a bridge