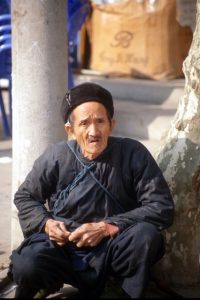 an old man in the village of Rongjiang, on the way to Kali

The road to Kali passes through several villages and towns with attractive markets, but even more spectacular are the various Miao and Dong minorities along the way.

We left early from Zhaoxing, by truck this time. The truck was full of people, and full of all sorts of ware, but only upon arriving in Luoxing we realized that it was market day here. People travel from all over the area to this village, which for one day per week becomes the centre of the universe, a bustling metropolis of vendors and buyers, and countless lookers-on. There is no through traffic on market day, so to catch the bus to Congjiang, the next sizable village, we had to traverse the main street, in between the market stalls, all the colorful people, who were just as curious about us as we were about them. And we had to travers the pig market, a pandemonium at one end of town, where hundreds of pigs and piglets of all sizes were transferred from trucks into cages, and when sold, put into purpose-made baskets for the new owner to take home. Pigs are not normally noisy, but they do scream when moved from truck to cage, or, worse, from cage to basket. 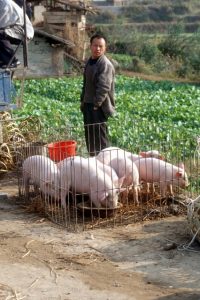 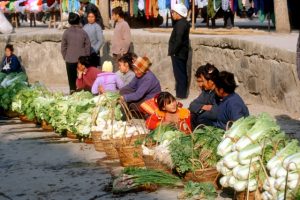 the variation of vegetables in the Luoxing market is rather limited 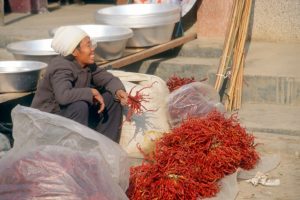 but can always be spiced up with chillies

The bus to Congjiang would not leave until 11, so we had plenty of time to enjoy the entire market craze. The minivan that took us, in the end, lost its sliding door during the ride, but that is really nothing out of the ordinary. Minivan in this part of the world obviously refers to size of the car only, not to the number of people that it can contain. In Congjiang we found a normal bus to Rongjiang, an even larger town, but more importantly, a town with a real hotel. Imaging the excitement of having a normal toilet seat again! 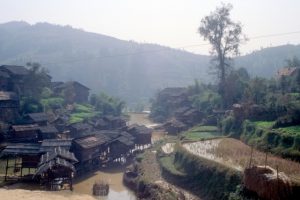 a village along the way 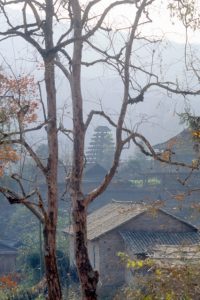 bell tower, also along the road, and behind the trees 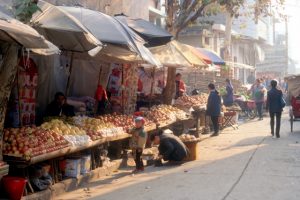 the market in Rongjing, a rather uninspiring event

Rongjiang has a famed Sunday market, which turned out a bit of a disappointment. None of the fierce pig trading we saw the day before, although we encountered dogs being sold in one area, presumably not for eating. For less than a dollar a puppy, Sofia almost bought them all. Furthermore, many different minority dresses were on display, often in groups of 5 or 6 women, all with the bamboo stick balanced on their shoulders, and with their characteristic step, very fast, in single file. 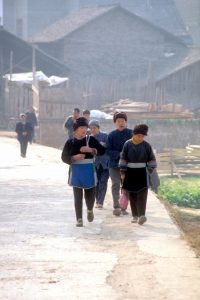 family on the way to the market 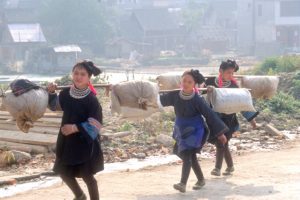 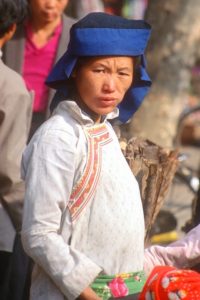 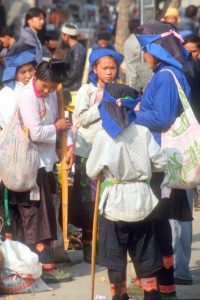 in fact, there is a whole group of them 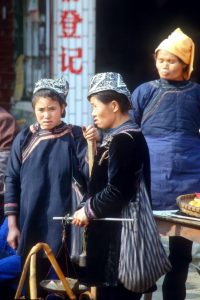 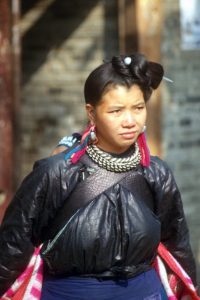 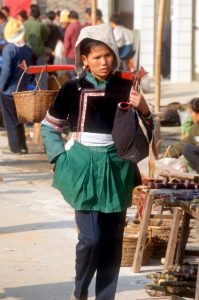 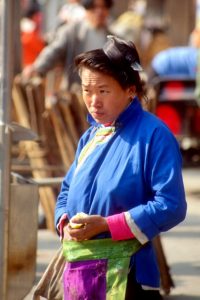 The journey to Kali was long and dusty, on yet another unsurfaced road. Here the enormous deforestation of this area became painfully clear, logging going on everywhere, whole mountainsides bald, and scores of rafts with tied-up logs floating down river. The bus driver was fully converted to the concept of strategic cost leadership, and in the process achieving his own personal emission reduction quota under the Kyoto Protocol. Each downhill stretch he switched off the engine, only to restart it again when the bus had come to a virtual stand-still. We only experienced one break-down, of some 20 minutes, which was actually very fortunate, as it happened in the village of Taishi, home to yet another minority, even more spectacular than we had seen so far. This group has the habit of creating the most fantastic hairstyles, loosely held together by just one comb in the back of the head, and enhanced again by very colourful dresses. 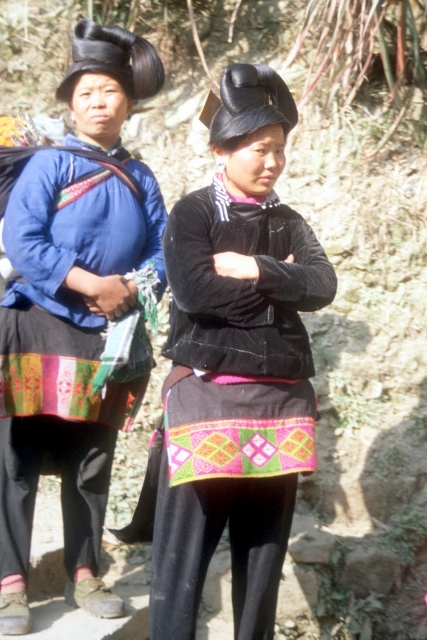 with these women, the art is no so much in the cloths, but in the hair!

In Kali some of our comfort returned again. We rented a decent car and driver to visit the Miao, another important minority in this area. After the isolated, authentic Dong experience, the Miao villages proved disappointing, not helped by the fact that it was overcast the whole day, and very cold indeed. As it was a government proclaimed public holiday, celebrating the return to the Motherland of Macau, people took the opportunity to party, and in one of the villages an enormous barbecue was cooking, accompanied by the music of the local band. Music was horrible, but the people were again so interesting, dressed in their Sunday best, the women with the most elaborate silver combs and pins in their hair. We were invited in on of the houses, initially to share the lunch, and in the process also to buy embroidered cloths, pillows and anything else one can embroider. The entire village population, it looked, came in at one time or another to show us their personal collection, all for sale. As everywhere in the Miao area, we were more than impressed by the friendliness of the people. In Kali, someone walked us all the way to the travel agency, without expecting anything in return, unusual in China, and later in the day the taxi driver dropped us off at our hotel and refused to charge us. Where on earth does that happen? Perhaps it does have something to do with the ethnic background.

next: the end of the trip in Guiyang 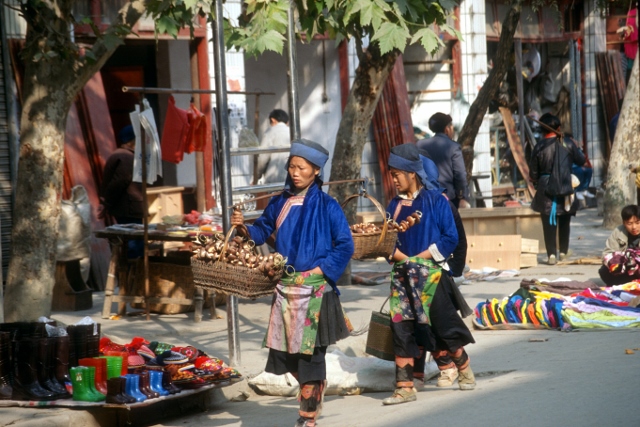 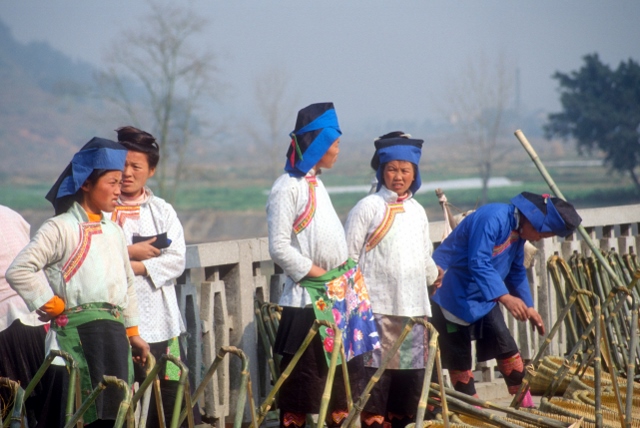