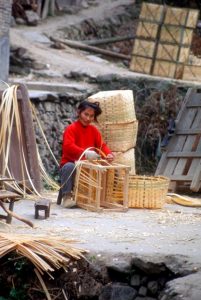 a woman weaving baskets in Zhaoxing

Another long travel day brought us via the village of Diping and more beautifull scenery to basket weaving Zhaoxing.

The target for the next day was Zhaoxing. First we had to backtrack to the ‘main’ road, where we were dumped at the junction, as our bus went back to Sanjiang. However, we were lucky enough to pick up a bus in the other direction within 20 minutes. This one was, despite the high turnover of passengers, continuously overcrowded, and the driver frequently refused passengers who tried to flag down the bus, only to let in again if others got off. Looks like there is a lucrative business opportunity, here. A full bus is especially funny if the driver breaks in an emergency – other breaking is considered waste of petrol -, with the predictable effect of all standing passengers falling forward onto those sitting, including the chicken and the goats. In Gao’an, where the turn off to Zhaoxing is, the Dong taxi was waiting, and together with six other passengers packed in the back, we set off for a slow and uncomfortably, bumpy 1.5 hrs ride to Diping, where we were supposed to pick up a connection. 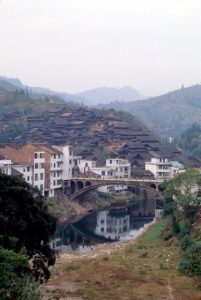 a village on the way 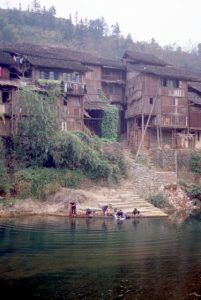 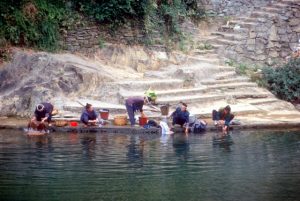 plenty of laudry to be done in the river 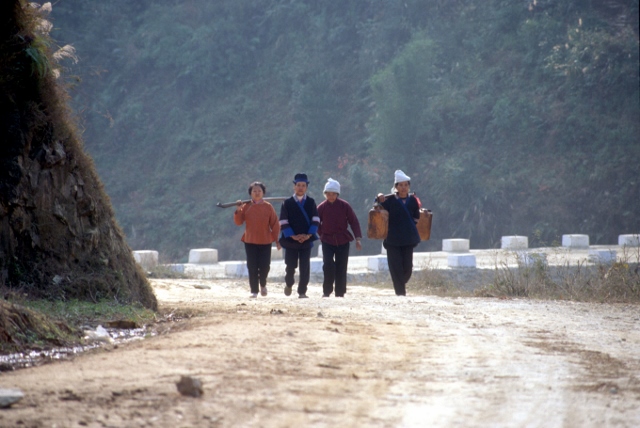 the main road, and the main type of traffic 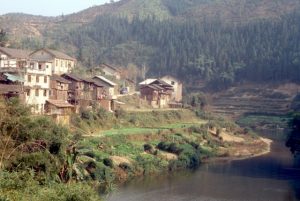 Diping village, on the banks of a small river 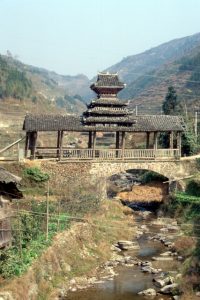 a simple Dong bridge, base reinforced inside a covered Dong bridge

Diping is one of these towns that have it all, ‘wind and rain’ Dong bridges, drum towers, a small market, but no connecting bus. However, our luck returned, when we found a minivan which was prepared to drive us, on an exclusive basis, and for a relatively small sum of money only, to Zhaoxing. And this part turned out to be absolutely spectacular, a drive through the mountains, coloured red from the autumn trees and bright green from the rice terraces. The trip was only slightly marred by the fact that the car broke down, which took more than an hour to repair, in the middle of nowhere. And with no one passing, we started to get a little worried…. 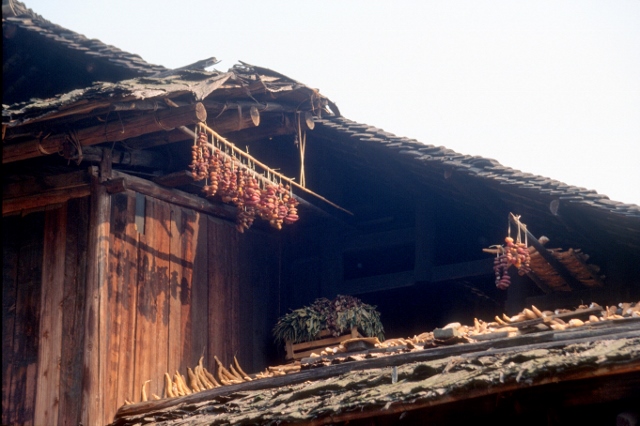 farm produce drying in the village 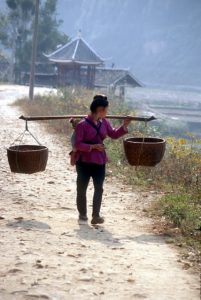 baskets and baby, all together 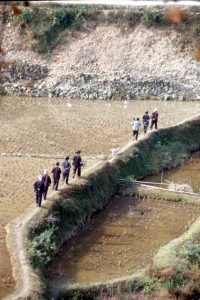 in between the race paddies 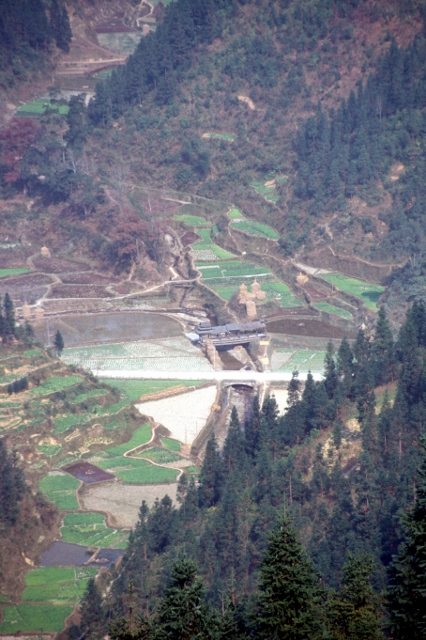 spectacular countryside, including another bridge deep below 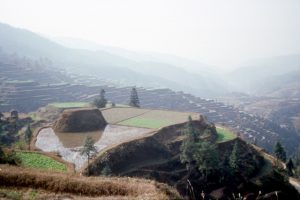 and rice terraces again, as far as one can see 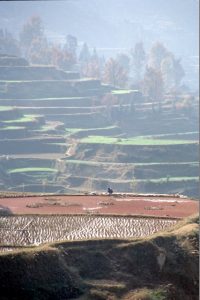 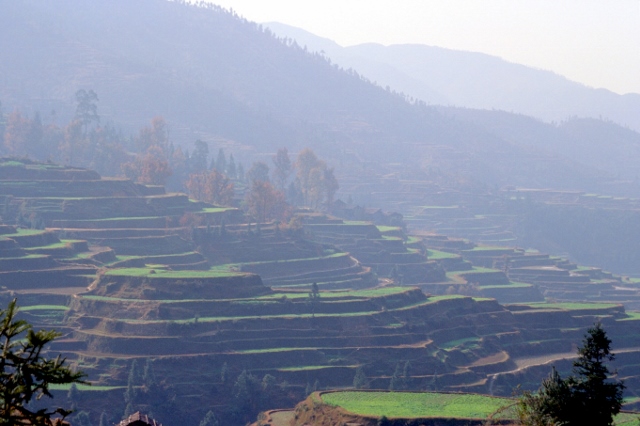 quite a few terraces are already green, here, unlike earlier Longji 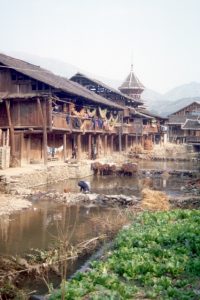 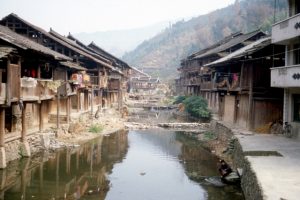 canal in between the houses of Zhaoxing

Zhaoxing proved as pretty as the guidebooks describe it. A village along the main road, or whatever the meaning of main road here is, but with numerous small alleys, walk ways really, away from the road, in between wooden houses, ponds and canals, small vegetable gardens and the obligatory bridges and drum towers. And the rubbish! Everywhere, in the water, along the paths, in the gutters. And the flies! The reason for the flies is almost certainly linked to the sanitary system in use, over each pond was built a simple wooden structure with obvious utility. And the ones who could not hold it, they just used the gutter, in broad daylight and in plain view. No inhibition here! However, as said, otherwise it was a pretty village. New wooden houses are still being build, but now they often contain the dark blue, tinted glass that is so omnipresent in larger Chinese town. 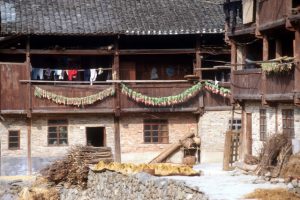 some form of huge radish being dried on the baconies 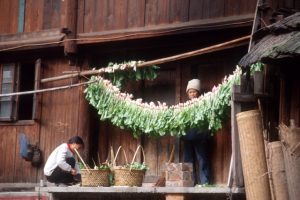 note the concrete platform as part of the solid wooden house 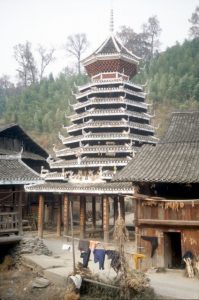 a Dong bell tower in the middle of Zhaoxing 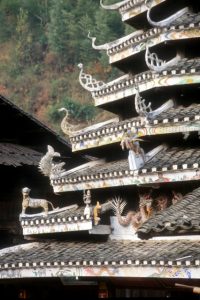 Many people go dressed traditionally, mainly in blue and purple of the Dong, and sometimes in pink or green or light blue, probably belonging to a different minority. Heads covered by a simple towel, worn like a turban. Some of the dresses are beautifully finished with embroidered bands at the sleeves, or in the neck. Many carry their children on the back, in purpose-made slings. And if they don’t carry a child, they carry a bamboo stick over their shoulders, with baskets or whatever at both ends. Baskets are made by the thousands, in Zhaoxing. Another popular product, rather simple, is the cutting board, essentially a slice of tree. However, the most striking characteristics of this area are the multitude of children around, obviously because minorities are not bound by the Chinese one-child rule, and the absence of Coca Cola, a rather unique feature these days, even in China.

Unfortunately, it was Friday night, or maybe they have karaoke every night. With the big speakers on the street, everybody may try, regardless of talent. There was actually little talent in the village, and the little there was, was frequently drowned in the enthusiastic joining in of the others. And that went on the whole night, probably the only entertainment available. Did we long for Tongle, where life switched off after dark! 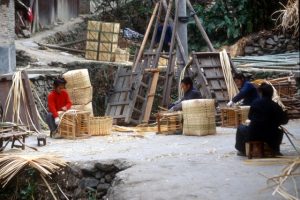 basket weavng is the main economic activity, it seems 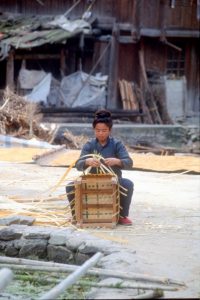 an activity that involves everybody