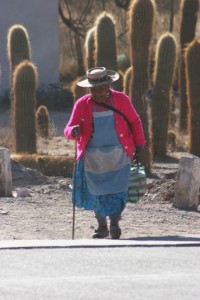 to the market in Humahuaca

Spectacular mountain landscape with cactus along the Quebrada de Humahuaca, the valley of the Rio Grande in NW Argentina.

This is the valley of the Rio Grande (what’s in a name…), and of the tarmac road that leads to the border with Bolivia, in North West Argentina. The valley gradually climbs to around 3400 m above sea level, on to the Puna, the Argentinean name for Altiplano. The landscape is absolutely spectacular in the lower ranges, with the multiple colours of steeply eroded rock formations, but becomes more monotonous on the Puna, where rolling hills dominate. It is one of the poorest areas in the country, situated in a desert climate where not much grows, except cactuses; economic activity here, especially outside the villages along the main road, is limited to herding cows, sheep and llamas. 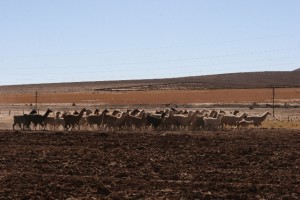 Llamas along the road, high on the Puna 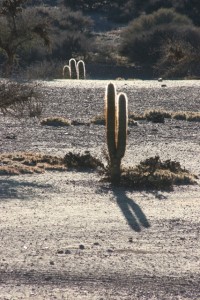 Another cactus in the Quebrada de Humahuaca 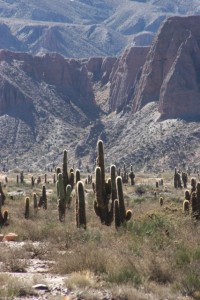 Cactuses in the Quebrada de Humahua

Humahuaca itself is just north of the Tropic of Capricorn, but any expectations of tropical temperatures, especially at night, are totally unfounded at this altitude, 2900 m. The village enjoys a good deal of tourist activity, many of the adobe houses have been re-invented as shops, selling ponchos, shawls and blankets of llama wool, itchy, as well as original and less original handicrafts, or as restaurants, serving all varieties of llama meat, which is in fact not great.

One of the less explored highlights is the Cerro Hornocal, a spectacular mountain range located behind the village, and best observed from a mirador – viewing point – at 4300 m on the road to Aparzo. By mid-morning the range bathes in bright sunlight, which enhances its various colours and structures. 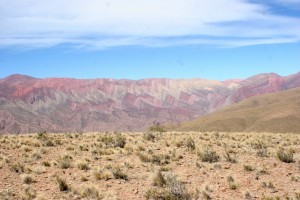 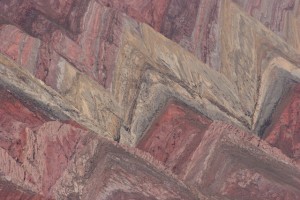 Cerro Hornocal, just outside Humahuaca, close up of folds