Tren a Las Nubes – Train to the Clouds 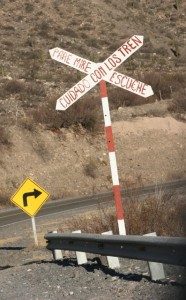 railway crossing: stop, look and listen (but only on Saturdays)

Possibly the highest train in the world winds through spectacular mountain landscape across wonders of engineering.

Salta, the historical town in North West Argentina, used to be connected by rail to Antofagasta, 900 km west on the Pacific Coast of Chile, on the other side of the Andes Mountains. Construction of this Tren a las Nubes (Train to the Clouds) was started in 1921. After eight years the line reached San Antonio de las Cobras, some 200 km west of Salta, but the connection with Chile was only achieved in 1948. The original track passes, on the Argentinean side alone, through 21 tunnels and goes over 35 bridges and 13 viaducts. There are also two switchbacks en two spirals, allowing the train to gain height rapidly to, ultimately, 4475 m – explaining its name.

Until the end of the 1980s a freight train did the journey regularly, mostly with ore for export. The Argentinean part of the journey took no less than 29 hours, if everything worked. Unfortunately, with the privatization of public services in the 90s the business collapsed, and services were suspended. However, a few years ago the train was bought by a private operator, who has turned it into a tourist object. Initially the service was regularly interrupted because of disputes between the operator, Ecotren, and the provincial government about who owned what, especially who owned the tracks, but since 2008 or so, the schedule is fairly reliable. On Saturdays the train leaves Salta at seven in the morning, for the 218 km trip to the Polvorilla Viaduct at 4168 m, the current end point of the line, and back, a journey that takes the entire day, for the humble sum of US$ 120,- (including breakfast and snack!!). The trip covers the most spectacular parts of the engineering works. 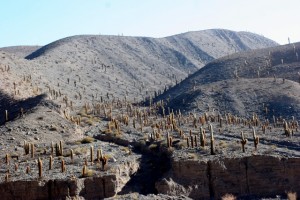 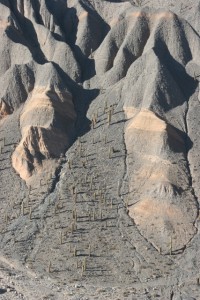 cactuses in the Quebrada de Toro

Fortunately, most of the trip can also be done by car, through what is called the Quebrada de Toro, in about four hours from Salta to San Antonio de las Cobras – although this won’t do for the real train enthusiast, of course! Everywhere along the road one sees, apart from fabulous mountain scenery, the evidence for the train: tunnels and viaducts, a switch back right next to the road, railway stations complete with old rolling stock, and numerous railway crossings. Yet the highlight, no doubt, is the Polvorilla Viaduct, some 20 km west of San Antonio de las Cobras, spanning some 225 m, 64 m above the local ground level. 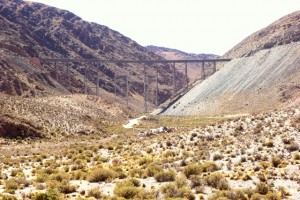 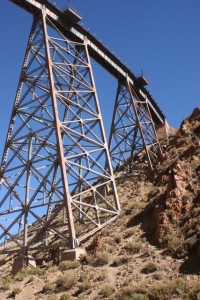 One Response to Tren a Las Nubes – Train to the Clouds