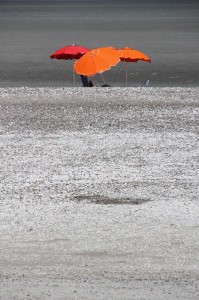 parasols on the beach of San Antonio Este  Details

A striking efficiency contrast between two towns, but the focus is on an unspoiled coastal village with spectacular beaches and seafood restaurants.

Everybody traveling to the south of Argentina, and following the coast, passes by San Antonio Oueste, West San Antonio. A rather uninspiring town, relatively big for this part of the world, a port of some standing and not much more. Yet, we managed to spend close to an hour here, on account of the need to fuel up the car. For some reason, fuel distribution is rather haphazard in this part of the country: we encountered many a service station that had ran out of fuel, despite the thousands of cars who each year during the Argentine holiday season travel south, and some weeks later north again. So wherever there is fuel, people will stock up. Resulting in long lines for the pumps, and plenty of time to witness the process. 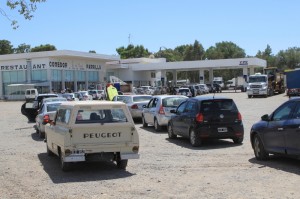 long lines for the pump

There are two pumps, one after the other, with space on both sides, so a total of four cars can fuel at the same time. But the ones at the back can only leave once those in front have done so. The fact that people have, like us, spent 45 minutes waiting has no effect on their attitude, or that of the pump assistant –  there is no self-service at the pump in Argentina, that would be a waste of potential jobs. One car, once filled up with fuel, still needs to be filled up with family members, who had to be collected from the shop, the toilet, and wherever else. Another car only needs 100 pesos worth of fuel, but insists that the windows, front and rear, are cleaned. When it is our turn, the assistant asked whether we want to have the oil checked, too. For a while, there is only one pump assistant, the second one has disappeared. There is no hurry, no sense of urgency. And nobody expects a sense of urgency. Nobody complains. 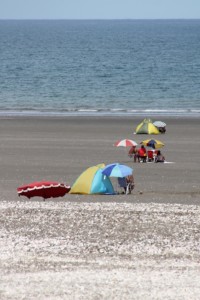 there are no facilities on the beach, you’ve got to bring your own

On the other side of the lagoon on which the port is situated, there is San Antonio Este – indeed, East San Antonio. A small village, really, with few facilities. But amongst those facilities are some of the most spectacular beaches of Argentina – without facilities, to be sure – and a couple of fabulous fish restaurants. Seldom have I observed a more efficient business process (which, for laid-back Argentina, is quite something!). Outside, whilst parking the car in front of the restaurant, somebody already approached us: how many people are we? A table for three had just been vacated, so we were shoved into the restaurant, next to the door. The only empty table. Whether we want to drink something, gaseosa (softdrink) perhaps? The bottles of Coca Cola, Sprite, or any local brand, come in 1.5 liters, no less. In minutes we have ordered our food, from a limited, but in no way insufficient, choice of seafoods, which appear on the table in another ten minutes. In the mean time we have seen a family of six leave, and another family occupying the table in no time, after three waitresses cleaned and re-set the table in a world record 47 seconds.

The photos in the menu depicted fairly humble plates, but the reality was different. Yet, the food was as good as the same photos suggested. Halfway our marathon eating session somebody suggested she would heat up the food again, in case it had gone too cold, but we were happy to take the – significant – left-overs with us. Including the rest of the gaseosa. Everybody else did the same. Coffee? No, they don’t have that (imagine the time it takes to serve coffee, and have all these people linger on?). So we left, after having eaten a superb meal, in less than half an hour.

When we looked back at our just-vacated table, three waitresses were already preparing for the next group, eagerly awaiting their turn. A rather strong contrast with the fueling process on the other side of the lagoon! 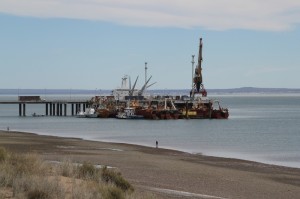 the only jetty of San Antonio del Este, where the fishing boats are moored, and trucks deliver containers one by one to a ship that exports the local fruit