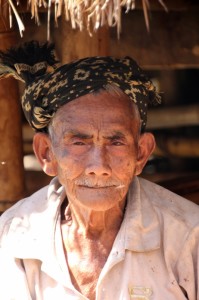 one of the Kodi people contemplating the tourist

The southwestern-most area of Sumba is called the Kodi district. Many Sumbanese claim that the Kodi people are the original island inhabitants, on account of them being slightly darker coloured, and apparently strikingly handsome – which, I can testify, is not true for all of them. They are also a little more cocky, and a bit more forthright perhaps, than the average Sumbanese – which, I can testify, is at least true for some of them. Again, there are no sizable towns here, and best is to approach the Kodi district from either centrally located Waikabubak or Waitabula, in the NW corner of the island; from both towns it will take a good hour’s drive, no more . 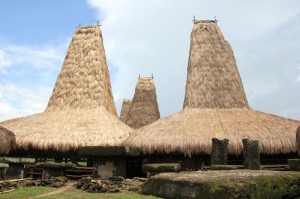 The Kodi district itself is all about traditional villages again, this time with even taller houses than before – a truly spectacular sight, indeed. To keep things manageable, each of the four villages covered here is briefly described on this page, and illustrated with a few pictures. For those interested, each village also has its separate entry, with more photos: just click on the link (a link on the village entry will bring you back to this page). 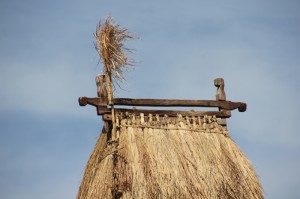 the top of the roof, including carved-wooden decorations 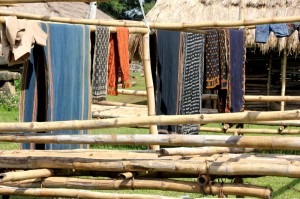 ikat is one of the things villagers are keen to sell 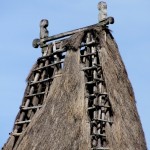 Near the coast is Rangabaki village, located within a few minutes from Ratenggaro, perhaps the most popular kampung in Kodi (see below). Outside Rangabaki is an extensive cemetery, with many tombs still empty. The village itself contains many traditional houses, with the extra tall roofs so characteristic for the Kodi area. The roofs are decorated with what is known as ‘the horns of the house’, sticks carved in recognizable figures of men and women. The people here have a lot of artefacts on offer, and are eager to sell – for a lot less than down the road in Ratenggaro, which receives many more tourists than Rangabaki. 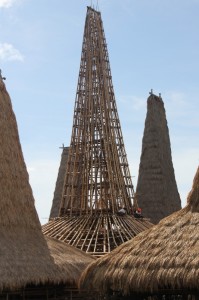 the tallest house under construction in Ratenggaro 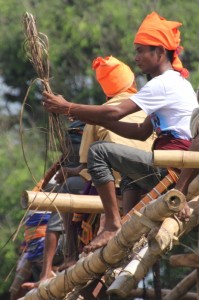 workers busy with the roof of one of the houses 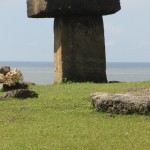 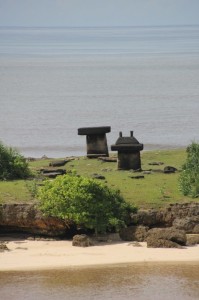 isolated tombs close to the beach in Ratenggaro 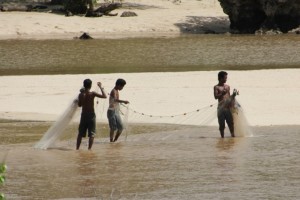 fishermen active along the beach

Perhaps the most attractive – and most visited – village is Ratenggaro, not in the least thanks to its brilliant location along a broad river, and just off the beach. The village counts many very tall traditional houses, two of which were being built anew, including what the villagers claimed would be the tallest in Sumba, with 22 meters. From the beach the village is even more impressive. Some tombs, presumably of important people, have been erected here, in isolation rather than in the village center or the cemetery outside. 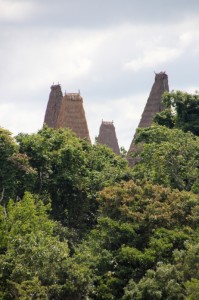 the view of Wainyapu across the river, tall houses sticking out above the tree tops 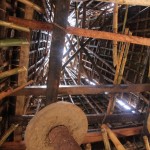 Across the river from Ratenggaro is Wainyapu, its tall houses clearly visible. But high water prevented us from crossing, and forced us to drive around, and approach the village from the other side. In fact, this particular village is actually a collection of 12 clans that have each put their houses in a circle, surrounding their tombs. One of the villagers invites us inside, to have a look at the extraordinary structure, a tall house built without any nails or screws, just wood, bamboo and vines. 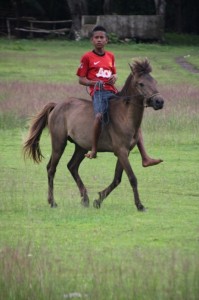 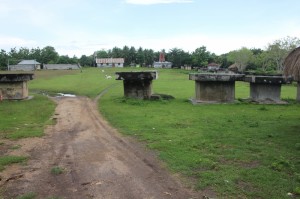 the pasola field at Wainyapu, surrounded by tombs, stands and some other buildings

Outside Wainyapu is one of the pasola fields of Kodi. A young boy is riding his horse, but for the rest the place in abandoned except for a few cows: the pasola spectacle, a mock-battle between two groups of villagers on horse-back, is held in February and March, only. 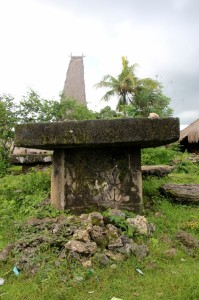 an old tomb, with one of the very tall roofs of Paranobaroro in the back 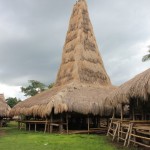 The village of Paranobaroro is hidden in the woods, except that the tall roofs stick out above the trees. It is a standard Kodi village, with very tall traditional houses, thatched roofs all along, and several tombs. One gets confronted with the tensions between traditional values and tourism, with children begging for money and sweets, and grandma demanding betelnut; it is tradition to bring presents, for instance betel nut, when people visit, yet in order to ensure tourist income for the entire village, the villages have introduced a visitors book, which expects a donation, a kind of entrance fee, if you like. 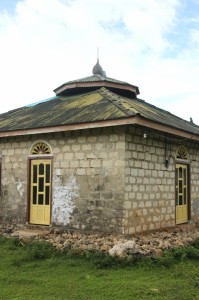 the little mosque in Pero 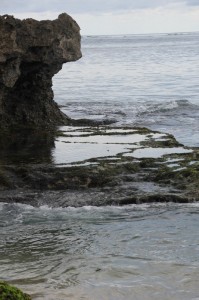 sharp limestones along the beach of Pero 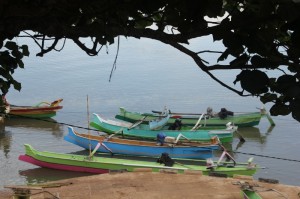 boats moored in the harbour 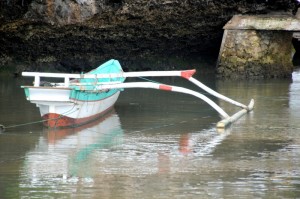 The Kodi area is apparently also a surfer’s favourite, but not in December. We end up in the small Muslim settlement of Pero, with beach and surf, and sharp coral limestones. Pero is also a small fishing village. The Sumbanese are scared of the sea, and are traditionally no fishermen, leaving this to people from elsewhere, like the Bugis from Sulawesi, who have established themselves along the coast. The colourful fishing boats in the small harbor and along the jetty are a welcome change for the predominantly brown and grey of thatched roofs and tombs. 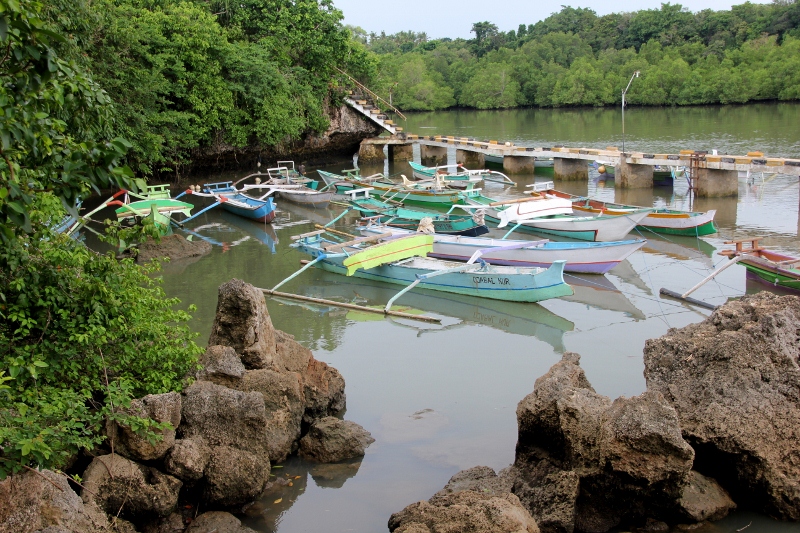 view of the secluded harbour 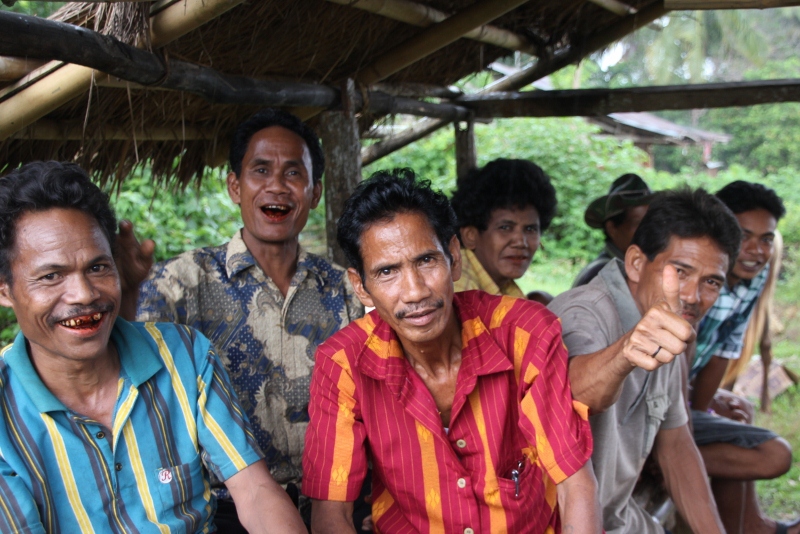 a group of men sheltering for the rain