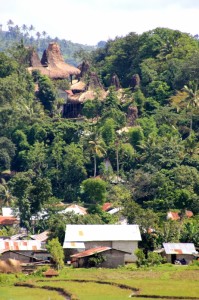 view of Kampung Tarung on the hill

Well-developed and obviously important kampung at the edge of town. 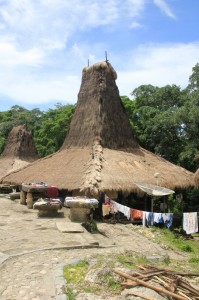 overview of the kampung

I already mentioned Kampung Tarung. This settlement, at the edge of town, is visible from the road that runs from Kampung Tarona west towards the market. It is the most important kampong around Waikabubak, apparently, and also the place of a special ceremony called Wula Padu, every year in November at the start of the Merapu new year. Where the previous kampungs were really small rural villages, Kampung Tarung has the hallmarks of urban development, with concrete walkways and street lights. Well used to tourists, soon after we arrived the visitor book was produced, which includes the expectation of a donation – an excellent idea, actually, so the whole village benefits from tourists. This is perhaps the biggest kampung we have seen so far, especially as it seamlessly merges with Kampung Waitabara, further along the rocky ridge. 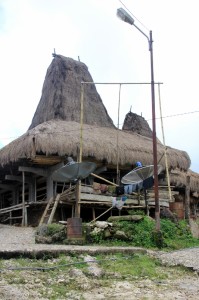 Kampung Tarong is more advanced than many others, with satellite dishes and street lights 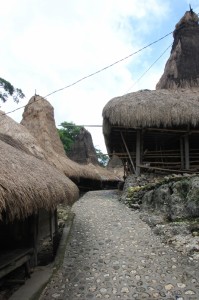 the modern streets, covered with patterned concrete instead of the usual muddy tracks 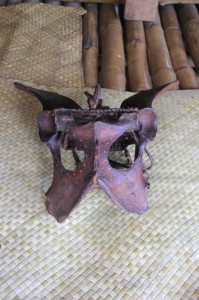 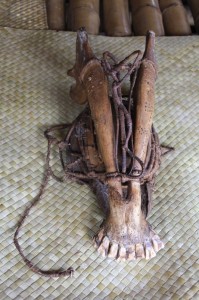 another work of art, a mask 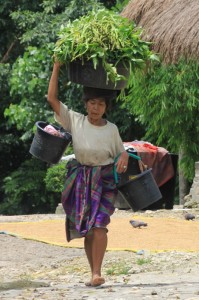 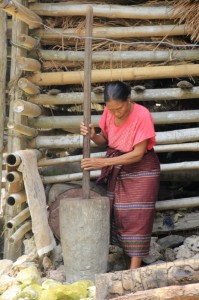 In Tarung, we also met Lado, a part-time artist we showed us a drum of shark skin and shark bone, a jacket from buffalo horn, and two masks he had made, with bones, teeth, horn and tree bark. Different from the usual, these, both drum and masks, were not intended for use, but just creative expressions from a creative man. Unfortunately, there is no market for this, at present, which is why Lado’s work is not sufficiently appreciated, and will likely also not find much following.

Interestingly, and talking about art, none of the kampungs visited in the Waikabubak area so far have a lot of decoration, in the form of stone carved totems, and none at all have the wooden patongs we have seen in East Sumba. There is one sculpture of man and buffalo, in Tarung, but for the rest decorations are mostly on tombs, in the form of geometrical figures, or perhaps a stone-carved buffalo head. Equally, the occasional house has the sticks on top of the roof (called kadu una, or horns of the house) decorated, with recognizable figures – like birds, for instance – but mostly, these are either just sticks, or with some geometric carving. Having said this, in the art shops in town (artefact shops, really) there are plenty of roof decorations in the form of men and women: I wonder whether these have been bought by the dealers, and nobody could be bothered to replace them.

Kampung Tarung seamlessly merges with Kampung Waitabara (or jump to the end of the tour, Kampung Bondomarotto)